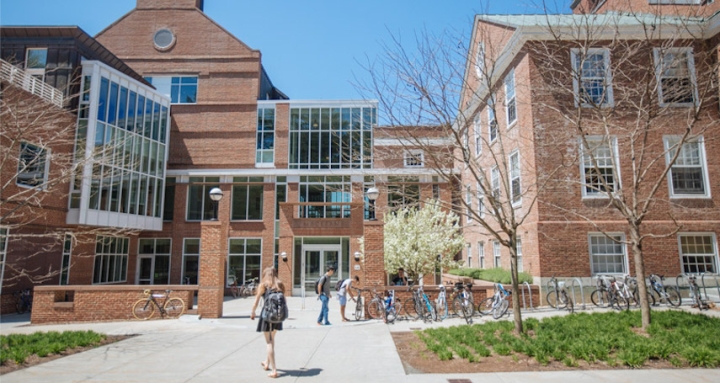 In the 55 years since he graduated from Dartmouth’s Thayer School of Engineering, Barry MacLean ’60, Thayer ’61, has notched an unparalleled record of service to the school and to Dartmouth. He has served on Thayer’s Board of Overseers for 42 years, championed curricular innovations in entrepreneurship, and helped to recruit to Hanover dozens of students from the Midwest.

As Thayer plans a major expansion to amplify its distinctive approach to engineering in the context of the liberal arts, MacLean is again blazing the way, making a $25 million gift to the project. He is directing $15 million of that total toward design and construction of a new engineering building; the other $10 million will be a challenge grant to create endowed professorships at Thayer.

“I believe deeply in the school’s mission and how the skills gained at Thayer can help prepare all students for their lives,” says MacLean, who received his undergraduate degree from Dartmouth in 1960 and has served on the College’s Board of Trustees. “I firmly believe every Dartmouth undergraduate should experience Thayer.”

MacLean’s gift is the single largest in Thayer’s 149-year history and continues a long tradition of support from MacLean and his family.

“Barry has been a staunch supporter of Thayer and Dartmouth for half a century,” says President Phil Hanlon ’77. “This inspiring gift to launch Thayer’s expansion is another powerful example of Barry’s commitment to our students, our faculty, and the entire institution. Through his example, I take great confidence that the exceptional experiential learning opportunities offered by Thayer today may soon be available to all Dartmouth students, instilling in them the skills and wisdom to lead with impact.”

The MacLean gift serves as a cornerstone for Thayer’s planned expansion, with its goal of offering every Dartmouth undergraduate the opportunity to explore technology in preparation to lead in a fast-evolving, global context—a key component of President Hanlon’s vision for a 21st century liberal arts education.

The expansion also will respond to increasing student demand, as engineering AB majors and BE graduates have almost doubled in the last 15 years.

To support this ambition, Thayer will significantly increase the size of its faculty, with a focus on the fields of energy, engineering in medicine, and entrepreneurship. The investment will make more innovative learning opportunities available to both engineering students and non-engineering majors while creating diverse teams with research expertise in pressing issues of global significance.  An extensive expansion of Thayer’s facilities will support growth in the school’s faculty, student body, and programs.

Dartmouth and Thayer are also exploring the possibility of locating the Department of Computer Science at Thayer to spur far-reaching collaboration in research and teaching.

The proposed expansion is contingent upon private gifts to cover the estimated cost of at least $200 million. MacLean is the chair of the fundraising effort, working in partnership with Thayer Board of Overseers Chairman Terry McGuire, Thayer ’82, and a committee of volunteers. Specifically, plans call for Thayer to:

Joseph Helble, dean of Thayer School and a professor of engineering, says the expansion will generate more research opportunities for students and allow Thayer to compete for larger research grants. He stressed, however, that the school will maintain its sense of community, with students having ready access to faculty.

“People and place are the defining aspects of Thayer’s unique community and approach to education,” says Helble.  “Barry’s investment in these two areas—and his invitation to others to join him—promises a transformation of our standing and impact around the world.”

Under the $10 million challenge grant portion of his gift, MacLean will match gifts, dollar for dollar, from other donors to help create endowed professorships at Thayer.

MacLean is chairman and CEO of MacLean-Fogg, an Illinois-based manufacturing company with more than 35 locations worldwide and a workforce of 4,500. He is the father of three Dartmouth alumni—Margaret MacLean ’87; Duncan MacLean ’94, Thayer ’95, Thayer master of engineering management ’96; and Gillian MacLean Growdon ’95.

“Engineering is recognized as a solution to many of the world’s challenges, such as hunger, space exploration, or extending life,” says Barry MacLean. “All those issues have engineering aspects, and students today are focused on trying to make a better world. Seeing young people going farther than you ever expected is really rewarding, and helping them on their way is a great joy to me.”