The artwork pays tribute to the statue of Robert Frost given by the alumni in 1996. 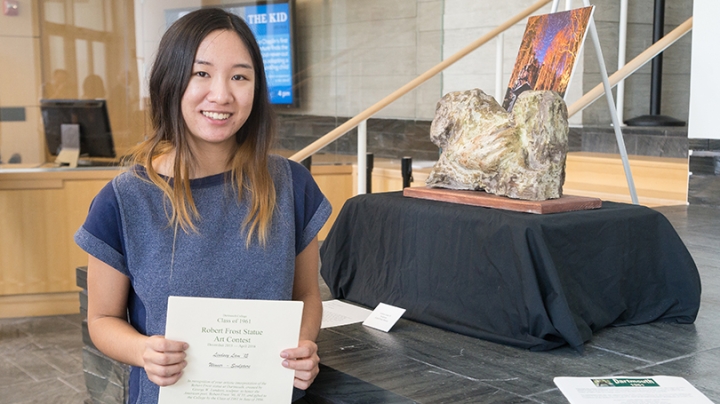 Sheltered by a grove of trees in College Park near Bartlett Tower, immortalized in bronze, sits Robert Frost. Over the past few months, artists studying or working at Dartmouth have made pilgrimages to this quiet spot, creating their own artwork based on the statue, which was donated in 1996 by the Class of 1961. Nine Dartmouth artists recently won awards in an art contest marking the 20th anniversary of the $50,000 gift.

The alumnus who came up with the idea for the contest, Victor Rich ’61, made the award presentations on May 19 in the lobby of the Black Family Visual Arts Center, where the winning work was displayed. Entries were invited from four media: sculpture, painting, photography, and drawing.

When he attended Dartmouth, Rich said, the arts were not as vibrant on campus as they are today. “The Hopkins Center for the Arts was just a hole in the ground,” he reminded several other class members who attended the ceremony and reception. When Frost gave poetry readings on campus, Rich said, he made a lasting impression on him and his fellow class members.

Rich says the Frost sculpture was the first and remains the only life-sized human figure displayed on campus. As he read the names of the contest finalists, his classmate Pete Bleyler ’61 handed each a check and a certificate signed by the statue’s sculptor, George Lundeen.

The grand prize ($2,750) went to sculptor Lindsey Lam ’15, a studio art intern, who took her cue from “Mending Wall,” the poem Lundeen’s Frost appears to be writing. She carved two hands reaching for each other, seemingly emerging from rough cut stone.

“As the hands in the sculpture reach out, above, and through the crumbling wall to find each other, I also hope that Dartmouth as a community can find a way to bridge gaps created by difference and that its members learn to communicate and work with another in a way that will be for the benefit of all,” Lam wrote in the explanation for her entry.