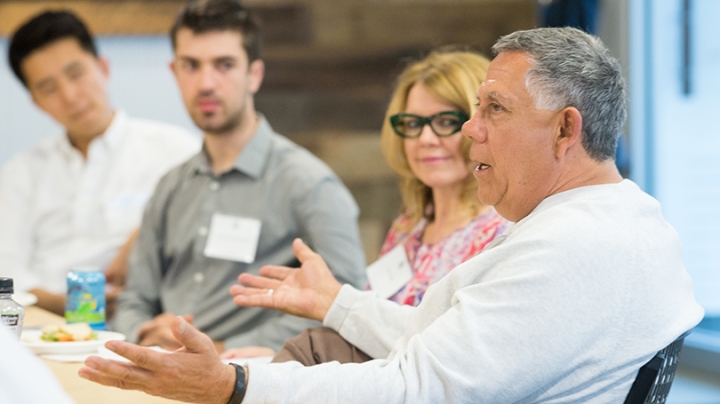 If you want to come up with a profitable, problem-solving invention, “fail fast, fail cheap, create, and work,” Frank Venegas, in town to receive an honorary degree tomorrow, told Dartmouth students over lunch Saturday at the DEN Innovation Center.

The grandson of Mexican immigrants, Venegas started his work life as a sweeper in a Detroit steel company. He scraped together enough money to establish his own steel company—and developed it into a $360 million enterprise. Today, the Ideal Group is a family-owned company employing 900 people and doing business throughout the world, and Venegas is a noted philanthropist as well as entrepreneur.

On Saturday, wearing a sweatshirt and sneakers, Venegas shared sandwiches with six aspiring entrepreneurs—four graduating seniors and two recent alumni—at the DEN. He didn’t give a prepared speech. Rather, as befits DEN’s informal setting, he asked people at the table about their career plans and shared stories about his own somewhat circuitous path to success.

About the first company he built, Venegas said, “I’m a lucky guy. I won a Cadillac in a car drawing, sold it nine days later, and started Ideal.”

Venegas has weathered serious downturns in the economy, and profited on the upturns. For example, when the last recession forced General Motors to close plants around the world, he helped them manage the process by not just discarding or idling, but also preserving and recycling equipment.

“I knew what not to throw in the dumpster, and I knew what to put on the Internet and sell,” he said.

He’s also learned how to provide construction services in both good and bad times for the real estate industry.

“I’m always writing stuff down,” he said, “and taking pictures, so I can remember my ideas.”

For example, when he noticed that guardrails and posts always seemed to be in need of paint, he developed a plastic sleeve for them.

Venegas attributes his success not only to inventive thinking, but also to living by the golden rule, valuing and rewarding the contributions of his employees.

“ ‘If you help someone,’ my grandma said, ‘you’ll get to heaven,’ ” Venegas recalled.

“What if I help a whole bunch of people?” he asked her.

“You’ll really get there,” she answered.

He has followed that advice. After attending the Tuck School of Business’ executive programs for minority entrepreneurs, Venegas was inspired to think about his broader responsibilities to his community. Recognizing economic prosperity as an antidote to urban decay, he relocated his business to southwest Detroit, where he hired ex-convicts, gang members, and others in need of a second chance—helping to transform the community by providing opportunities to young people. He regularly sends employees to the same Tuck program he completed.

In 2015, Dartmouth honored Venegas with the Martin Luther King Award for Ongoing Commitment in honor of his philanthropy, mentoring, and advocacy within his community.

At the DEN lunch, he fielded a wide range of questions about his design process and business strategies. The most important thing, Venegas said, is to learn from mentors and to thank them for their help.

“It doesn’t have to be expensive. Just write them a note. It’s so important to recognize them,” he said.

Afterwards, Victoria Li ’16 said that what she appreciated most about Venegas’ freewheeling conversation was the reminder that not all start-up businesses need to peddle high-tech products.

“He comes from manufacturing,” she noted, “he still makes things. People talk about Facebook, Google, and all that, but entrepreneurship can also happen in ways people don’t always talk about. For me, personally—I’m not in the app world, I am more interested in hospitality and food—it’s good to see other sides of entrepreneurship brought in to DEN.