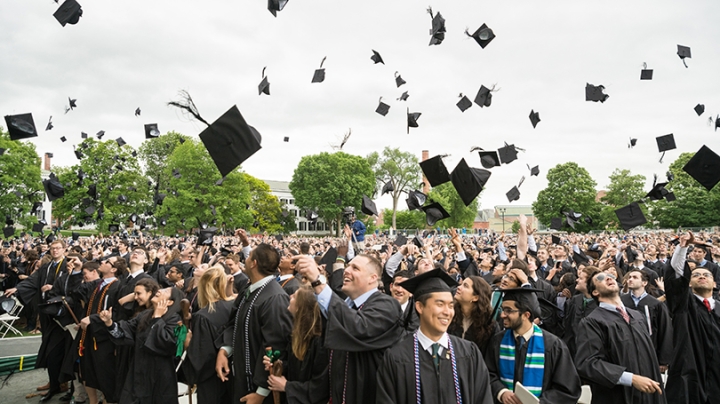 Students celebrate at the end of the commencement ceremony. (Photo by Eli Burakian ’00)
6/12/2016
Body

Speakers at Dartmouth’s 2016 commencement ceremonies struck common chords, urging graduates to respect opinions they may not hold, bridge cultural and political divides, and work toward peace in a war-torn world.

Under skies that turned from warm and bright to chilly and gray, President Phil Hanlon ’77 conferred 1,867 bachelor’s, master’s, and doctoral degrees in undergraduate and graduate Arts and Sciences programs, the Geisel School of Medicine, Thayer School of Engineering, and the Tuck School of Business.

The June 12 morning began as students and members of the 50th anniversary Class of 1966 made their way to the Green, heralded by the Dartmouth Wind Ensemble and led by bagpiper Joshua Marks ’96.

The president of Native Americans at Dartmouth, Kimonee Burke ’18, extended a welcome, and Nancy Vogele ’85, director of Religious and Spiritual Life, offered a blessing.

Commending Dartmouth’s original mission to educate Native Americans, and its re-dedication to that purpose by its 13th president, the late John Kemeny, Burke said, “When we learn from one another and deal honestly, justly, and with integrity, we can promote, secure, and preserve our communities at home, abroad, and here at Dartmouth.”

Nobel Peace Laureate and world-renowned human rights activist Leymah Gbowee, whose work to build an interfaith women’s movement helped end Liberia’s civil war in 2003, asked the audience to rise above prejudice. She opened her commencement address by recalling a day when she was a little girl in Liberia. Her grandmother insisted on taking her deep into a forest to visit an old woman rumored to be a witch. Gbowee was terrified, but after meeting the woman, she realized that the woman was neither a witch nor dangerous, but a “generous soul” who had been unfairly maligned.

Gbowee drew parallels to today’s violence-ridden “upside down world” where “fear and the politics of division have taken over, and we are slowly losing our common humanity.” Even she, a Nobel laureate, faces discrimination as she travels the world. “Based on how I dress and how I look and the country I find myself in, I am immediately spotted as a possible migrant,” she said.

Gbowee asked for a moment of silence in memory of those killed in an Orlando, Fla., nightclub in the early hours of the day.

In addition to the doctor of humane letters awarded to Gbowee, Dartmouth bestowed five honorary degrees. The recipients:

Jonathan Vandermause ’16, one of eight valedictorians of the Class of 2016, was chosen to deliver the valedictory address. (Photo by Eli Burakian ’00)

As “a living example,” of serendipity, he named British mathematician John Horton Conway, who, while devising and playing seemingly trivial games with his students, made an earthshaking discovery about numbers.

“In those moments of full attention,” Vandermause said, “we become alive to the hidden possibilities all around us, to the valuable things not sought for.”

In his farewell to the Class of 2016, President Hanlon said, “If we’ve served you well, you’ve come away with a healthy dose of intellectual humility—an appreciation that no one person has all the answers. I hope that’s the case and that we have instilled in you further a hunger and respect for the views of others and a willingness to question your own views in the wake of dissenting voices.”

As “a role model” of the willingness to consider opposing points of view, Hanlon pointed out  a member of the Class of 1966 in the audience—“one of the true independents in the U.S. Senate,” Angus King.

Before taking a seat with his classmates, King had reminisced about the “rich, deep experience” he valued at Dartmouth. “We were more isolated in those days,” he noted, “the interstate wasn’t complete until our senior year and it was a project just to get to Boston. It was a kind of lifeboat experience where we were all together, and because of the North Country and the cold, there was a feeling of bonding.”

Sunday’s ceremony capped a week of graduation activities. On Saturday there was a multi-faith baccalaureate service in Rollins Chapel with performances by the gospel choir. The speaker was Simran Jeet Singh, an assistant professor of religion at Trinity University, and senior religion fellow for the Sikh Coalition. Also Saturday, graduate and professional schools held investiture ceremonies.