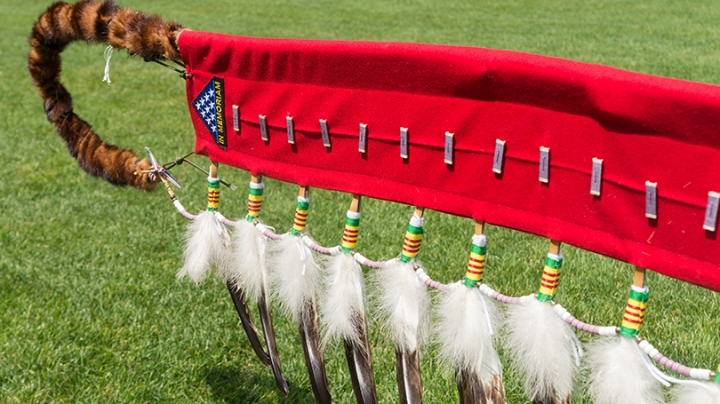 Trudell Guerue ’74, a Vietnam veteran and Sicangu Lakota, created the eagle feather staff, which will be carried in this year’s commencement procession. (Eli Burakian ’00)
6/09/2016
Body

Dartmouth’s link to Native Americans will have a role in this year’s commencement ceremony.

A Native American welcome will be delivered by Kimonee Burke ’18 of Cape Neddick, Maine. Burke is Narragansett and Niantic.“I hope it will be an opportunity for the rest of campus to understand more about Dartmouth's Native history,” says Burke, president of Native Americans at Dartmouth (NAD). “Dartmouth receives attention from tribes across the country, and the history of this school is well known in our communities.”

The commencement will also include an eagle feather staff, to be carried in the procession by Chad Rairie ’16, who served in the Marine Corps in Afghanistan. Rairie, who is not Native American, is vice president of the Dartmouth Undergraduate Veterans Association.

The staff was created by Trudell Guerue ’74, a Vietnam veteran and Sicangu Lakota who came to Dartmouth after serving in the Army Airborne. He created the staff to honor 21 Dartmouth men who died in the Vietnam War.

Guerue, who was wounded in combat, presented the ceremonial staff to the NAD organization, and it has become a traditional element of the opening festivities of Dartmouth’s annual Powwow. The staff includes feathers sheathed with the Vietnam Service Ribbon and cloth featuring 21 Purple Heart ribbons.