The first board member without a Dartmouth affiliation brings a valuable perspective. 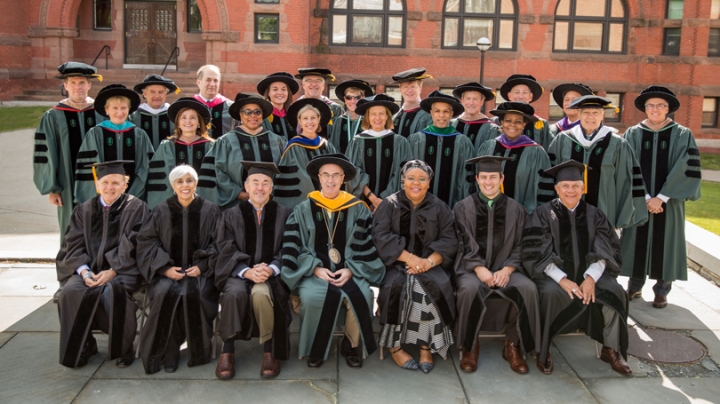 President Phil Hanlon ’77 and members of the Board of Trustees and several trustees emeriti sit with honorary degree recipients prior to Commencement on June 12. The board was on campus for its June meeting and to participate in Commencement ceremonies. (Photo by Robert Gill)
6/12/2016
Body

At the June meeting of the Dartmouth Board of Trustees, President Phil Hanlon ’77 highlighted the progress made in advancing academic excellence across the institution over the past year.

Also at the meeting, the board announced three new members, paid tribute to five retiring trustees, and participated in a number of graduation activities, culminating in commencement ceremonies on June 12.

The three new charter trustees are Jeffrey Blackburn ’91, James Jackson, and Erica Schultz ’95. They will join the board following commencement. Jackson joins the board as the first non-Dartmouth-affiliated member in the College’s history.

“We are thrilled to welcome such a talented and diverse group of new trustees,” says board Chair Bill Helman ’80. “Jeff, James, and Erica will bring fresh wisdom, uncommon judgment, and practical contributions to our board discussions. They join Caroline Kerr ’05 and Beth Cogan Fascitelli ’80, trustees-elect selected last year, as the next generation of trustees who will help build on the early successes of Phil Hanlon’s presidency.”

As the first charter board member without a prior Dartmouth affiliation, Jackson brings a valuable perspective to the board, says Hanlon. “James will bring a new point of view to our work as we consider Dartmouth’s place in the higher education landscape.”

“Dartmouth is deeply grateful to our retiring board members,” says Helman. “They have focused relentlessly on ways to strengthen the institution, and we thank them for their invaluable contributions and dedication.”

The board reviewed and approved appointments and promotions to faculty positions in the Faculty of Arts and Sciences, the Geisel School of Medicine, the Tuck School of Business, and Thayer School of Engineering.

The board affirmed plans to proceed with the renovation and expansion of the Hood Museum of Art. The trustees also voted to approve $10 million for construction of the Moosilauke Ravine Lodge and $22 million to build a new indoor athletics practice facility. Each of these projects will be funded through private gifts to Dartmouth.

The trustees remained in Hanover throughout the weekend to participate in activities related to the graduating Class of 2016. Events included Class Day exercises for undergraduates; investiture ceremonies for the graduate studies program, Tuck, and Thayer; the Phi Beta Kappa induction ceremony; the ROTC commissioning ceremony; and the annual baccalaureate service for all graduates.

The trustees also attended a luncheon with members of the Class of 1966 who were on campus to celebrate their 50th reunion.

Blackburn is the senior vice president of business development and digital entertainment at Amazon.com. He serves on Dartmouth’s President’s Leadership Council and is a member of the board of the Experimental Education Unit at the Haring Center for Research and Training in Inclusive Education at the University of Washington. He holds an undergraduate degree from Dartmouth and an MBA from Stanford. He and his wife, Anne Fleischli Blackburn ’91, live in Seattle with their two daughters.

Jackson is the Daniel Katz Distinguished University Professor of Psychology, professor of Afroamerican and African studies, and former director and research professor of the Institute for Social Research at the University of Michigan. He is a former national president of the Association of Black Psychologists; recent past president of the Consortium of Social Science Associations and the Society for the Psychological Study of Social Issues; and a member of the Institute of Medicine, National Academies of Science. He holds a bachelor’s degree from Michigan State, a master’s from the University of Toledo, and a PhD from Wayne State.

Schultz is executive vice president of enterprise sales at New Relic, a leading software analytics company, and has more than 20 years of experience in software and sales, having recently served as executive vice president of global sales and customer success at LivePerson. Prior to joining LivePerson, Schultz had a 17-year tenure with Oracle Corporation, where she founded and led numerous teams within the sales organization, including pioneering the company’s cloud business, and leading teams for North American and Latin American markets. She is a founding member of the Centennial Circle of Dartmouth Alumnae and a Dartmouth College Fund volunteer. She holds a bachelor’s degree from Dartmouth. She and her husband, Bryan Schultz, live in the San Francisco Bay Area with their two daughters.