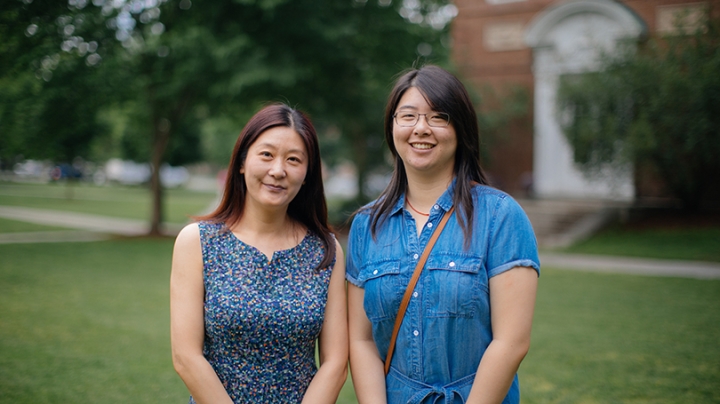 Cecelia Zhang, left, and her daughter Jenny Zhang are both receiving Dartmouth degrees at graduation this year. Jenny will receive her bachelor’s degree and Cecelia her Master of Health Care Delivery Science. (Photo by Robert Gill)
6/10/2016
Body

It is not unusual for parents to attend their son's or daughter’s Dartmouth graduation. It is less common for a parent to receive a degree on the same day.

Class of 2016 graduates John Comerci III and Jenny Zhang and their respective parents, John Comerci Jr. and Cecilia Zhang, will all march at commencement this weekend.

The elder Comerci and Zhang, both MDs, are each receiving a Master of Health Care Delivery Science, offered through a partnership between the Tuck School of Business and The Dartmouth Institute for Health Policy & Clinical Practice (TDI). The two know each other from TDI, which requires two-week residencies at key points during the 18-month program, paired with online study for the rest of the time.

The younger Comerci and Zhang are graduating seniors, Comerci with a major in neuroscience and Zhang with a major in psychology and a minor in biology. They don’t know each other except through recent word of the shared situation of graduating with a parent. But they agree that this gives their parents a greater appreciation for the challenges of an undergraduate.

“People think it must be kind of different going to school with your mother, but when you are both students together there is more understanding,” says Jenny Zhang.

“It made me a more understanding mom,” says Cecilia Zhang. “Before, I said she was lazy, that she didn’t spend enough time on everyday things, but when I saw how much reading and work there is, I totally understood what she is talking about when she said there was not enough time.”

Cecilia Zhang, an adjunct professor at the Geisel School of Medicine, and Jenny Zhang are originally from China. They now share a home in Hanover. Jenny plans to go on to a master’s program in clinical psychology at Loyola University Maryland. Cecilia will continue at Geisel as director for clinical health care in China.

John Comerci Jr, right, and his son John Comerci III are both receiving Dartmouth degrees at graduation this year. The younger Comerci will receive his bachelor’s degree and the elder Comerci his Master of Health Care Delivery Science. (Photo by Eli Burakian ’00)

The Comercis didn’t have as much time to spend together. When the elder Comerci, an obstetrician-gynecologist and professor at the University of Pittsburgh Medical Center, drove up to Hanover for the on-campus part of the program, his son was in the thick of his work, which included volunteering as a research assistant on Associate Professor Bradley Duchaine’s groundbreaking research into prosopagnosia, better known as face blindness.

“That first year, when I called him up he would invite me to join him in the library for some studying time,” he says.

The younger Comerci says they might grab dinner, “or we might walk and talk together a bit, but it was good to connect about school. I think he got reacquainted with all the stress. He would say, ‘Finally I know what you’re talking about.’ ”

“I already knew he was working hard,” John Comerci says of his son. “But I remember talking about how stressful it was to be cold-called in class—when the professor just calls on you without warning.”

They are all looking forward to the commencement ceremony, when the two generations will pass these major milestones on the same day. The Zhangs will have family from China visiting for the big day, and the Comercis will share the occasion with their family.

But in the end, the parents’ pride is the same.

“I am going to take a step back. This is his day and I’m just along for the ride,” says the elder Comerci.

“It will be a very exciting day,” says Cecelia Zhang.