Treb Allen is the first hire for the faculty cluster on the challenges of globalization. 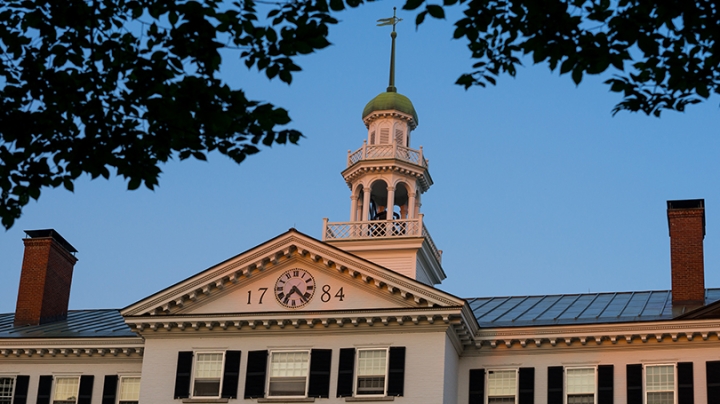 “I’m delighted that Treb Allen will join our faculty. The globalization cluster will soar with his innovative scholarship,” says President Phil Hanlon ’77.

The cluster is one of 10 interdisciplinary groups being created as part of President Hanlon’s academic initiative to extend Dartmouth’s impact on important and complex global challenges—from cracking the neural code and alleviating poverty to engineering in the Arctic and in the digital humanities.

“I’m very excited about joining a world-class group of scholars, especially in the field of international economics,” says Allen, who was previously an assistant professor of economics at Northwestern University, and whose work is at the intersection of trade, economic development, and geography.

Jay Hull, associate dean of the faculty for the social sciences, calls Allen an “emerging star” in international economics. “His research is exceptional in both its creativity and its broad choice of topics,” Hull says. “Although his primary focus is in international trade, his work addresses major issues in development economics, economic geography, and microeconomics.”

Hull says Allen’s approach to research sets him apart from his peers. “Quite simply, Professor Allen is a triple threat: a superb theoretician who is at the same time methodologically sophisticated and highly skilled at computational modeling. It is not surprising that he has already garnered distinguished young-career appointments at top schools across the country. We are all very excited that Treb will be joining us at Dartmouth and feel that he provides an incredibly strong anchor to the new cluster in globalization.”

As its name suggests, scholars within the globalization cluster “will study the far-reaching repercussions of globalization on world markets, governments, trade, and society,” according to the description on the Office of the Provost’s website. A gift from an anonymous donor is supporting the creation of professorships, including Allen’s, in economics and government and at the Tuck School of Business.

“The interdisciplinary cluster provides an excellent opportunity to bring together a wide variety of perspectives on a number of important—and politically relevant—issues, like the appropriate design of trade agreements,” Allen says.

“Treb is one of the very best scholars in his cohort. His work on international trade is path breaking and helps us better understand how information frictions and trade costs determine levels of trade between countries and differences in incomes,” says Bruce Sacerdote, the Richard S. Braddock 1963 Professor in Economics and, until recently, chair of the economics department.

Allen, who earned his master’s and doctoral degrees in economics at Yale University, recently completed a visiting appointment at Stanford University’s Institute for Economic Policy Research and an International Economics Section fellowship at Princeton. His published papers have investigated, among other things, microfinance lending, how the costs of learning about foreign market conditions (information frictions) affect agricultural trade in the Philippines, trends in unemployment in India, and how the promise of freedom affected the fertility of enslaved women in the antebellum South.

A research fellow at the National Bureau of Economic Research and a research affiliate with the International Growth Centre at the London School of Economics and Political Science, Allen is also an associate editor of the Journal of International Economics.

Allen earned his bachelor’s degree in political economy at Williams College. “As someone who was fortunate enough to attend a liberal arts college, I appreciate the value of getting to interact closely with one's professors,” he says. “I look forward to offering such opportunities to my students as well.”

“Treb has a deep commitment to Dartmouth’s research and teaching model, with its focus on undergraduates, and we are extremely excited to welcome him to the economics department,” says Sacerdote. “The advent of the new globalization cluster has enabled Dartmouth to build in this area and hire a star researcher at the forefront of his field.”

Allen’s wife, Marcela Di Blasi, will be a postdoctoral fellow in the English department, specializing in the role of gender and religion in contemporary Mexican American literature. “We’re both thrilled to be joining the Dartmouth community,” Allen says.