The focus is to create connections from the heart of campus to the Connecticut River. 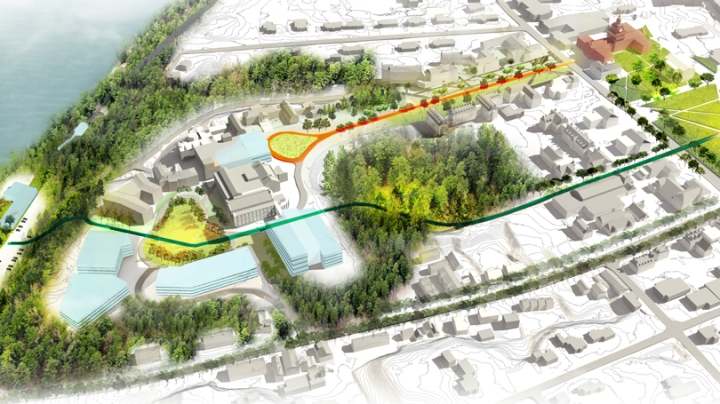 The light blue structures show potential future construction sites. The green line is the path that a walkway, including a pedestrian bridge, would take from the Green to the Connecticut River. (Courtesy of Beyer Blinder Belle architects and planners)
9/08/2016
Body

Dartmouth is working on a “green to blue” concept that creates connections and opens views from the Dartmouth Green to the Connecticut River as part of early planning work underway for the west end of campus.

“The river is a hidden gem,” says Lisa Hogarty, vice president of campus services. “This plan creates a route from the Green to the river and adds new community green space. The plan also works to make the west end of campus more pedestrian- and bike-friendly.”

The west end planning—still in the conceptual phase—comes as College leaders look at projects in distinct areas of campus. Work is underway in the arts and innovation district with the current expansion and renovation of the Hood Museum of Art and planning for future renovation of the Hopkins Center for the Arts. The goal of a campus master plan, of which west end planning and ongoing review of other spaces are a part, is to identify future opportunities, but without a set timeline or budgetary commitment.

Also in the future is consideration of the north end of campus, focusing on the demolition of Gilman Hall—and creation of green space in its place—coupled with the complete renovation of Dana Hall for faculty use. Gilman, formerly the biology building, is in poor condition and has been vacant since the completion of the Class of 1978 Life Sciences Center 2011. Dana, the former home of the biomedical library, is in much better structural condition. It has been vacant since 2012.

Early thinking about the future for the west end includes building expansion opportunities for Thayer School of Engineering, the Department of Computer Science, and the Tuck School of Business; potential construction of a parking garage; safety improvements to the intersection of West Wheelock Street and Thayer Drive; traffic flow modifications; enhancement of outdoor spaces to connect the campus to the riverfront; and development of a pedestrian/cyclist bridge over the town-owned cemetery located between the Class of 1953 Commons and the MacLean Engineering Sciences Center.

Some of the west end programming under consideration would necessitate removal of the River Cluster residence halls and construction of new dormitory space, plans for which are not yet in the works.

To start, the planning is on infrastructure to support future development—systems for heat, water, power, and transportation—as well as consideration of the aesthetics of future buildings and improvements to signage.

“We’re thinking about the future before we put buildings and other improvements in place,” says Joanna Whitcomb, Dartmouth’s campus planning director.

Planning goals and principles that are guiding the early work on the 50-acre west end area include:

Potential sites for new buildings could support the addition of more than 450,000 square feet to the existing 530,000 square feet of building space that currently exists in the west end (not including undergraduate housing).

“We’re very excited about the work ahead and look forward to continued dialogue with the campus community on this work,” Hogarty says.