‘Orwell in America’ Previews at Dartmouth Before Heading to New York

Students are working full-time on the production in partnership with Northern Stage. 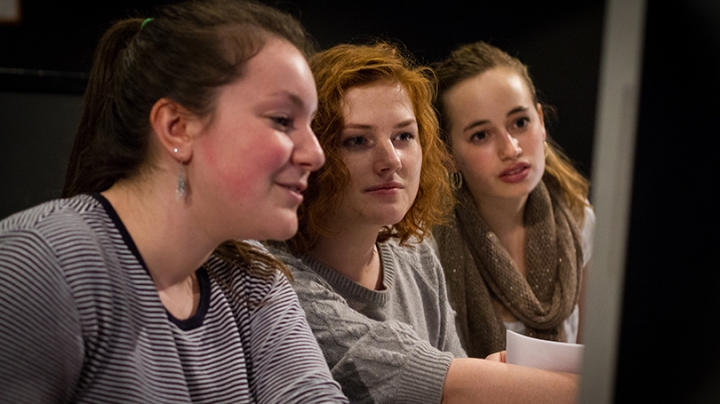 Jaclyn Pageau ’18, left, Lela Gannon ’18, center, and Tess McGuinness ’18 prepare for a rehearsal of Orwell in America in the Bentley Theater. They are all members of the tech crew for the production. (Photo by Joshua Renaud ’17)
9/28/2016
Body

In a new partnership between Dartmouth and Northern Stage, in White River Junction, Vt., a small group of students are working full-time on a production that will soon travel to New York for a month-long run.

It’s Orwell in America, written by Joe Sutton ’76, a senior lecturer in the theater department, and directed by Professor of Theater Peter Hackett ’75. Hackett says the alliance with a professional theater offers students a rare chance to see what it really takes, not just to mount a single production, but to have a career in the performing arts.

“With this new collaboration with Northern Stage, they get to be on the inside track of everything—marketing, fundraising, community outreach, seeing new plays take shape, rehearsing, loading the set and costumes on a truck, and driving to New York. That level of intensity is unusual, even in professional schools and conservatories.”

The students’ opportunity is supported by the Dartmouth Center for the Advancement of Learning (DCAL) and the Leslie Center for the Humanities, and is called an experiential, or “e” term. Instead of taking classes, four “e-termers”—Lela Gannon ’18, Claire Feuille ’18, Tess McGuinness ’18, and Jaclyn Pageau ’18—are working every day at Northern Stage. Guided by mentors, they’re marketing, running lights and sound, supervising costumes, and assisting the stage manager of Orwell in America.

They’ll continue their work off-Broadway at the 59E59 Theater Oct. 12 through Oct. 30. A fifth student, Virginia Ogden ’18, is also working at Northern Stage but will not go to New York so she can perform in the Vermont production of MacBeth, opening Sept. 28.  All five will take part in the Northern Stage production of A Christmas Carol, which runs Nov. 16 through Dec. 24.

McGuinness is thrilled to be working at a fast pace with professionals on very different plays. “They are trusting us to do our jobs well, looking at us as professionals, too,” she says. “It’s humbling and exciting.”

In addition to stagecraft, students are learning about post-war history and literature from Sutton’s play. George Orwell never traveled to the United States, even though the novel that catapulted his career, Animal Farm, sold many more copies here than in his native England. Rewriting history, Sutton imagines what it might have been like for American audiences to meet a writer whose work they loved, but whose politics might have been confusing to them. While he was staunchly opposed to totalitarianism, Orwell (the pseudonym for Eric Arthur Blair) espoused socialism at the advent of the Cold War.

“What if Orwell came to America to confront or correct or inspire his readership to open their minds to his anti-totalitarian message? To avoid conflating socialism with communism, as so many people did then—and still do to this day?” Sutton wondered.

Orwell in America will be reaching a New York audience shortly before a fiercely contested presidential election. Sutton notes that “democratic socialism” was a hot button issue during the primary, when Sen. Bernie Sanders struggled to explain why he described his politics in that way. But Sutton doesn’t think of his play (which had its main-stage world premiere last March in at Northern Stage) as prophetic.

“Playwrights are not prophets,” Sutton says. “We’re more like people in hot air weather balloons. They’re not prophetic about the weather, they’re just seeing things at 3,000 feet that some others can’t see.”

In Sutton’s play, set in small-town America, Orwell is escorted on a two-week Animal Farm publicity tour by a smart young woman named Carlotta. She’s sent by Orwell’s publisher to keep the writer from upsetting audiences with his socialist views. Her role is played by Jeanna De Waal, who has performed on Broadway in Kinky Boots and Wicked. Orwell is portrayed by Jamie Horton, a professional actor who teaches in the Department of Theater.

The public is invited to Orwell in America rehearsals and post-show question-and-answer sessions in the Bentley Theater on Sept. 29 and 30, and Oct. 1. On Saturday at 4:30 p.m., there will be a pre-show panel discussion featuring Andrew Samwick, the Sandra L. and Arthur L. Irving ‘72a, P’10 Professor of Economics and director of the Nelson A. Rockefeller Center for Public Policy; Dean Lacy, a professor of government and the director of Dartmouth’s Program in Politics and Law, and playwright Sutton.  The events are free and open to the public.