Dartmouth’s Nina Pavcnik delves into the nuances of the much-discussed trade deal. 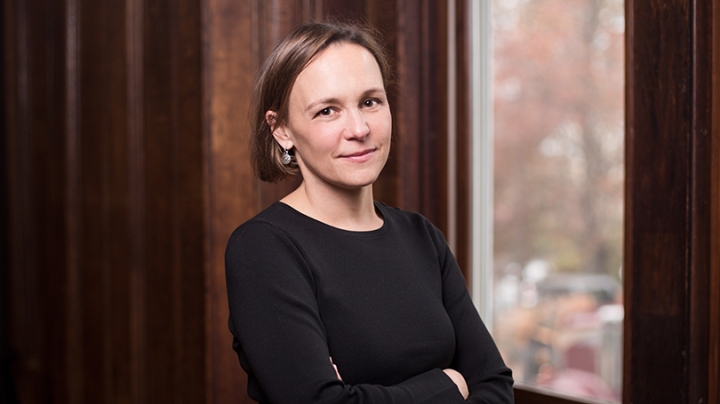 For 20 years, Professor Nina Pavcnik has studied and conducted research on the economic benefits and costs of liberalizing trade around the world. (Photo by Rob Strong ’04)
9/23/2016
Body

Editor’s note: Author Nina Pavcnik is the Niehaus Family Professor in International Studies and a Dartmouth Public Voices fellow. This column is reprinted from The Conversation.

The proposed trade deal known as the Trans-Pacific Partnership—TPP for short—is drawing fire from both the right and the left as a middle-class jobs killer. Meanwhile, President Barack Obama continues to defend it as a boon for American businesses and consumers, as well as the larger economy.

For the past 20 years, I have studied and conducted research on the economic benefits and costs of liberalizing trade around the world. But for all my expertise, I remain deeply ambivalent about the TPP. In fact, I suspect it’s because of the depth of my knowledge that I see no clear answers. Consider this: For all the pyrotechnic debate, a recent poll suggests that a clear majority of registered voters—62 percent—know little or nothing about the agreement.

For anyone in the same boat and in need of a primer on the ins and outs of the TPP, let’s start with the basics.

TPP in a Nutshell

The TPP is a U.S. trade agreement with 11 countries around the Pacific Rim. Together these countries account for almost 40 percent of the world’s GDP. The agreement aims to improve economic growth and prosperity among its members through trade by reducing tariffs on imported goods, improving market access in service sectors, and establishing rules for conducting business.

But in order for the countries to trade according to these new rules, this complex agreement, which took seven years to negotiate, needs to first be ratified by its signatories, most notably the U.S.

So why all the hubbub over this particular trade deal?

To be sure, the U.S. economy benefits from international trade and agreements that facilitate it. As consumers, we benefit by gaining access to cheaper clothing, toys, and electronics, and enjoy greater selection of coffee, cars, and shoes. Trade offers new markets as well as profit and employment opportunities for businesses and workers in many exporting industries, ranging from aircraft and pharmaceuticals to Hollywood movies and soybeans.

These benefits have been overshadowed if not ignored in recent discussions surrounding the TPP, which have homed in on the feared losses of middle-income manufacturing jobs. Some of the loudest objections came from Democratic presidential candidate Bernie Sanders and Donald Trump, as well as their supporters.

The Impact on Jobs

This is not surprising. Recent research confirms that workers living in places once considered manufacturing strongholds, such as Bassett, Virginia, and Raleigh, North Carolina, have been hit hard by increased imports from low-wage China. Chinese competition has accounted for almost a quarter of the decline in American manufacturing jobs since the 1990s.

These economic struggles are powerfully portrayed in a recent book, Factory Man, that describes the resilience of a company that was once the largest U.S. furniture manufacturer as well as the life in its hometown of Bassett.

Critically, the TPP does not include China. And the U.S. tariffs on manufacturing imports are already very low, about 2 percent to 3 percent. Consequently, increased foreign competition from proposed tariff cuts on manufactured goods in the deal are unlikely to cause a large negative hit to employment in manufacturing.

In addition, while many of these tariff cuts are on exports from low-wage Vietnam, that country’s workforce of 54 million is markedly smaller than China’s 806 million, so not of sufficient size to influence the U.S. or global economy.

In sum, the TPP will lead to some further dislocation of U.S. manufacturing jobs, but not of the size that many of its opponents appear to assume.

At the same time, the TPP will facilitate exports of services by U.S. companies, generating new jobs in industries such as telecommunications and electronic commerce. Overall, however, recent studies suggest that these reductions in traditional trade barriers proposed in the TPP will have a relatively small effect on overall U.S. employment and the economy.

Not Your Typical Trade Deal

The more you look, the more complicated it gets.

The above discussion evaluates the TPP agreement as if it were a standard trade agreement that focuses on reducing tariffs on imported goods and improving market access. However, one cannot simply view the TPP in this way.

Instead, the vast majority of the agreement is really about establishing or strengthening the rules for conducting business on the ground in each member country. And this is where discussion of the economic merits and perils of the TPP gets even more complicated.

At first glance, these rules might seem like a win-win situation for businesses, consumers, and workers alike. For example, many rules, like those protecting intellectual property rights, resolving investment disputes and harmonizing technical standards, will facilitate the functioning of global supply chains and benefit U.S. multinationals in the Pacific Rim.

Some of these benefits and cost savings could trickle down to consumers, who are also protected by the TPP from companies’ anti-competitive and fraudulent behavior. And the TPP goes further than any existing trade agreement to promote workers’ rights, not just in high-wage countries but especially low-wage economies such as Vietnam, where workers currently lack the right to organize independent unions.

On the other hand, it turns out that it is difficult to quantify in broad terms how the economic benefits and costs of the TPP regulations will fall on businesses, workers, and consumers, particularly in the area of intellectual property rights and investment disputes. These regulatory measures are much more complex and nuanced than taxation of goods at the border, the dominant policy tool in older trade agreements.

In addition, the impact of these rules depends on the economics and technology of a particular industry, including its innovation cycle and degree of competition. It also depends on how the new rules compare and interact with existing regulations. And to make things even more complex, a recent study shows that lobbying efforts of U.S. multinationals have in fact tilted the more traditional trade policy tools to the benefit of their offshoring activities.

So what are the downsides if the TPP fails to get ratified?

For one, the U.S. could lose its credibility to negotiate future trade agreements, and it would surely let down its Pacific Rim trading partners that are committed to strengthening economic ties among each other. The failure to pass the agreement also brings some economic costs to other countries, most notably the TPP’s poorest member, Vietnam. That country is bound to benefit the most from the elimination of traditional barriers to trade and the agreement’s promises to strengthen workers’ rights.

In addition, some believe that the Asian signatories might set sight on forming their own free trade agreement with each other, or perhaps even one with China, putting the U.S. at a disadvantage to negotiate a favorable agreement with these countries in the future. And beyond the economics of the agreement, political scientists have emphasized the geopolitical ramifications of the TPP, such as its security benefits and its key role in boosting U.S. power in Asia-Pacific.

So Where to From Here?

President Obama’s hopes for Congress to pass the agreement during the lame duck session after the November election currently look bleak.

Because the president negotiated the TPP with trade promotion authority—also known as “fast track”—the Congress can vote up or down on the agreement without the ability to amend it. The chance of its passage appears even grimmer if the vote takes place after the next president takes office, given the anti-TPP rhetoric of Hillary Clinton and Donald Trump.

That said, virtually all recent U.S. presidents have been pro-trade while in office. And although one cannot amend the TPP to further address concerns about its toll on American workers, they could be addressed by passing the agreement and enacting side measures such as more generous trade adjustment assistance, which is a federal program that aids workers displaced by international trade.

So, overall, the TPP is an agreement with many moving parts and it is not obvious what to do about its ratification, even for an expert like me. What is clear, however, is that ratifying the TPP or not won’t solve the problems of America’s manufacturing workers, displaced by automation and globalization. The economic forces of globalization are here to stay.

The problem is that the U.S. social safety net fails to help individuals and their families cope with job losses, be it from automation or trade. For example, a recent study suggests that the hardship felt by workers displaced by trade extends beyond loss of a job to include deteriorating public safety, lower spending on public housing, and diminishing school quality for their children.

Given this state of affairs, I believe that bashing the TPP is not the answer – nor is blindly supporting it. Rather, the U.S. public needs to shift the conversation to focus on what we can do to ensure that the economic opportunities provided by technological progress and globalization are more equally shared with those left behind.