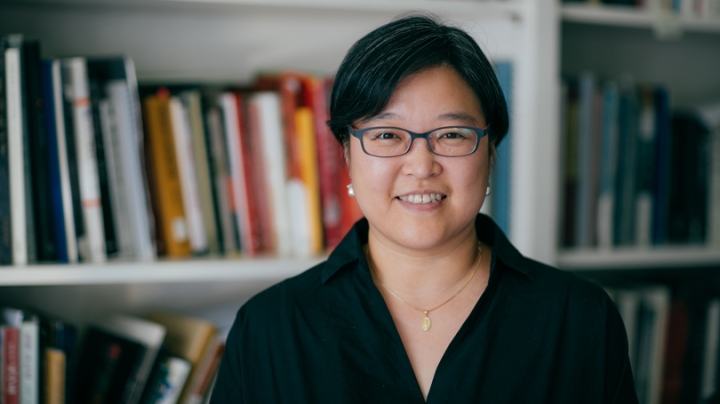 An encounter with a Korean chaekgeori screen painting changed Sunglim Kim’s understanding of Korea’s early interaction with the West. Kim is an assistant professor of art history. (Photo by Robert Gill)
10/25/2016
Body

Assistant Professor of Art History Sunglim Kim was an assistant curator at the Asian Art Museum in San Francisco about 14 years ago when she first saw an example of a colorful 19th-century screen painting of shelves of books, Chinese porcelains, and Western objects like clocks and eyeglasses.

“I didn’t think it was Korean,” she says. “When you think of Korean art typically you think of monochrome prints of bamboo trees or chrysanthemums or pine trees, landscapes, and figures,” painted by elite scholar-officials seeking cultivation and self-expression—not an unsigned still-life of foreign luxury objects.

To Kim’s knowledge, still-life painting, so popular in Europe, hadn’t yet reached Korea, which had no direct diplomatic relationship with the West until the late 19th century. The Confucian ideals that informed most of the art of Korea’s Joseon Dynasty didn’t consider ordinary objects worthy subjects for painting. The screen was painted using illusionist techniques like perspective, common in the West but almost unknown in traditional Korean art. And where had those eyeglasses come from?

But the painting, or chaekgeori (chaek for book, and geori for object or knicknack) was indeed Korean—and a mystery that challenged much of what Kim had known about Korea’s early interaction with the West.

Now Kim has brought the first large-scale exhibition of Korean chaekgeori screen paintings to the United States—24 works, several of which have never been seen outside of private collections. The exhibition, which began in Seoul, South Korea, this summer (only the second, and the largest, such exhibition in Korea), opened at Stony Brook University in New York in late September, and will travel to the University of Kansas in the spring and the Cleveland Museum of Art in August 2017.

Kim was born in South Korea and came to the United States for college, first in Seattle, and then at the University of California, Berkeley. “I changed my major so many times: psychology, sociology, women’s studies,” she says. “But in the end I took an art history class on the Italian Renaissance. It was like going on a journey when the professor showed us slides and talked about people in Europe in the 16th and 17th century. I felt like I went to Europe.” She decided to major in art history.

She wanted to study Korean art history, but it was hard to find in America in the 1990s, when she was an undergraduate—the first professor in the field was not hired until 2000, at UCLA, she says. “There were no Korean galleries. Korean objects were placed in the corridor between Chinese and Japanese galleries. I took many Chinese, Japanese, and Indian art history courses, but no Korean art history. It challenged my identity.”

Kim wrote to the director of South Korea’s national museum, expressing her concerns—and landed a yearlong internship back home in Seoul. “Working there I realized that it was not that we didn’t have art, but that we didn’t have people who could represent Korean art to the world—people with languages and knowledge,” she says.

So she returned the U.S. to complete a master’s degree at the University of Kansas and her PhD at Berkeley—where she taught the first Korean art history class—and worked at the Asian Art Museum where she discovered that first chaekgeori screen.

“My starting point was, what is this painting?” she says. “I wrote a small section about it in my dissertation, and then it got expanded. And every time I gave a presentation at a conference, people would challenge me with questions or offer information.”

At one such conference, a specialist in Chinese art history suggested Kim look beyond Korea for answers. “The question was, if Koreans didn’t have any direct interactions with Westerners, where did they get this?”

The connection seems to be 18th-century Korean diplomatic envoys who would travel to Beijing three times a year, where they met Jesuit missionaries and found European-made items like telescopes, clocks, Western zithers, and glass mirrors in the market. In their diaries, Kim says, these envoys recorded their experiences of Beijing’s South Catholic Church, where they looked up at the ceiling and saw “numerous children running around in the middle of the cloud”— trompe l’oeil cherubim that looked so realistic one envoy wrote, “I felt like they were going to fall down.”

At Dartmouth, Joy Kenseth, a professor of art history who specializes in Western Renaissance and Baroque art, observed that the 18th-century chaekgeori paintings had some similarities with European works from a century or so earlier—an insight that led Kim and Kenseth to collaborate on a paper on the evolution of the painting of collectible objects, from the English “cabinet of curiosities,” German wunderkammer, and Italian studiolo, to China and, eventually, the Korean chaekgeori.

It’s a history of early globalism and cultural exchange, in both directions. In the Qing imperial court of 18th-century China, the ethnic Manchu emperors wanted to impress their Han Chinese subjects with their scholarship and cultivation—and so were eager to host Jesuit missionaries who brought scientific instruments, realistic-seeming artistic techniques like trompe l’oeil, and the fashion of the cabinet of curiosities for collections.

“From the Qing period, the idea of the display shelf was really popular,” Kim says. “You can see paintings of the emperor, who is kind of pretentiously presenting himself as a scholar reading a book, with all kinds of intricate objects and books and texts. From the 18th century, we see this duobaoge, which means cabinet of many treasures, everywhere.”

In Korea, books and scholarship were highly valued among the elite. “Whenever the envoys came to Beijing they had a long list of books to buy,” Kim says. “Koreans liked to represent themselves as scholars.”

Jeongjo, who ruled Korea from 1776 to 1800, “was a bibliophile who established the royal palace library,” she says. He also commissioned chaekgori that looked so realistic it was said that some of his officials at first mistook the painted books for real ones.

The popular painting style became an opportunity for owners to show off their possessions and values. “This is kind of like Facebook,” Kim says. “Each of the objects in the paintings has a symbolic meaning you can decode, and at the end you can kind of read the messages.” Like an early form of emoji, “back then people would understand all the messages” the images contained.

Of the chaekgeori exhibition now in America, Kim says, “It’s really important work. Nine of the works could have been designated as national treasures, so when the international exhibition committee was held to review the exhibition, they objected to sending them outside of Korea. But we convinced them that you have to show the best work to represent Korea’s pride, and they said OK.”

Unfortunately, the exhibition will not be coming to Dartmouth—the Hood Museum of Art is currently undergoing a major renovation. But this spring, Kim plans to teach an undergraduate course called “East Meets West,” approaching the subject of cultural exchange through stories of Chinese porcelain, the Silk Road, “chinoiserie” and “Japonism” in Europe—and chaekgeori painting in Korea.

“I’m really interested in this kind of hybrid or third culture that is created with the interactions” among different cultures, Kim says. “Chaekgeori is one of the really good examples of that.”