The Class of 2020 King Scholars Arrive on Campus

The students are from Brazil, Pakistan, Kenya, Bosnia and Herzegovina, and Jamaica. 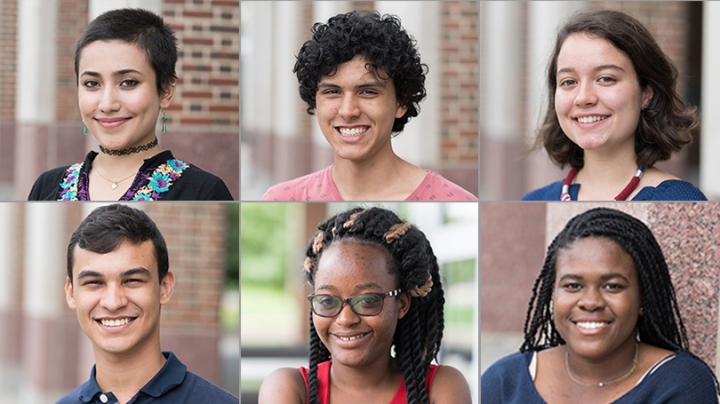 Learn more about the King Scholar Leadership Program on the program’s website.

From Brazil, Pakistan, Kenya, Bosnia and Herzegovina, and Jamaica, this year’s King scholars have arrived at Dartmouth.

For Musyoka, who is studying government at Dartmouth, being a King scholar offers her a chance to “pay it forward,” she says. “I feel like my purpose and dreams in life are changing, and in my heart I know that I can make a difference with all I have been given.”

De Almeida Silva, who will focus on Latin American, Latino, and Caribbean Studies as a major, says he hopes to also explore other parts of the world. “I feel like the program is going to offer me resources to deepen my understanding on global development and on issues that Brazil faces, which will be of great value to the fulfillment of my future goals,” he says.

Now in its fourth year, the King Scholar Leadership Program was started with a gift from Dorothy and Robert King ’57 of $14.7 million to help address the problem of global poverty by establishing a scholarship program for exceptional students from developing countries. Since 2012, the Kings have given Dartmouth $35 million to support the program.

This year’s scholars join those already on campus to bring to 16 the number of students in the program, which is designed to bring young scholars from developing countries in Africa, Latin America, and Southeast Asia to study at Dartmouth. The students are encouraged to return home after graduation and work toward alleviating poverty in their native countries.