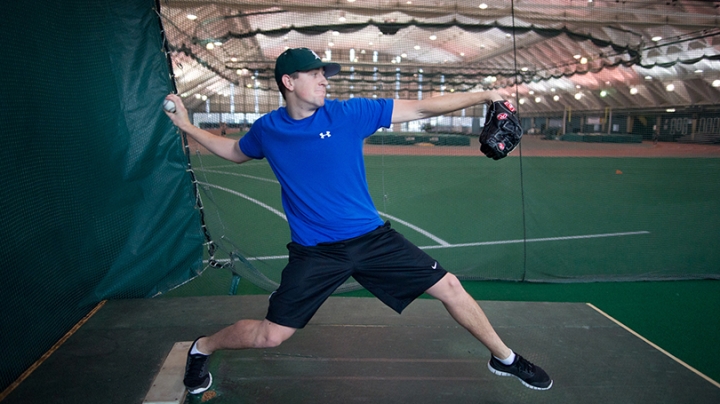 Kyle Hendricks ’12, here at pitching practice in Leverone Fieldhouse, is headed to the World Series as the Chicago Cubs’ pitching ace. (Photo by Eli Burakian ’00)
10/24/2016
Body

Pitching ace Kyle Hendricks ’12 is getting plenty of media attention as the Chicago Cubs prep for the opening game of baseball’s World Series tomorrow, the first time the team has been to the World Series since 1945.

Hendricks, called “the Professor” by his teammates, was the winning pitcher on Saturday as the Cubs beat the Los Angeles Dodgers to clinch the National League pennant. Hendricks allowed just two hits in seven-and-a-third innings to get the 5-0 win on Saturday.

Hendricks said he tried to stay focused in the outing, a raucous affair with a pumped-up crowd at Chicago’s Wrigley Field.

“The outside forces felt different,” Hendricks told the Times. “You felt the buzz around the stadium, definitely the energy. It was loud in there. At the end of the day, all I was trying to do was simplify and make good pitches. I was able to stay in that zone, kind of stay in my bubble.”

Hendricks featured prominently in a number of stories following Saturday’s win. There was this, in The Washington Post: “Turns out athletic heroes—even those who alter the history of a franchise and a city—don’t have to look the part. Chicago calls as its son Michael Jordan, who reshaped professional basketball. It boasts Dick Butkus, who is the dictionary-ready definition of football player. On Saturday night, it had Kyle Hendricks. Put him in a cubicle or at a card catalog, and he’d scarcely be noticed. Saturday night, he was at the center of the cauldron that was Wrigley Field, pitching the Chicago Cubs into their first World Series—say it and sing it, Chicago—in 71 years.”

The Times wrote, “The baby-faced Hendricks, who graduated from Dartmouth with an economics degree, has made a career out of a pinpoint but pedestrian fastball and operating in the shadows.”

An Oct. 20 TIME magazine story (“How the Chicago Cubs Built an Unlikely Ace”) deconstructed the coaching and how players have helped Hendricks up his game.

“After beginning the season as the last starter in the Cubs rotation, the soft-­throwing Dartmouth graduate has blossomed into one of the best pitchers in baseball. He finished the regular season with the lowest earned run average (ERA) in the majors—the first time a Cubs player has done so since 1938—­cementing his transformation from afterthought to Cy Young Award candidate.”

Saturday’s game mirrored an earlier win for Hendricks. In 2009, his first year at Dartmouth, Hendricks won the clinching game in another postseason series. Starting the final game of the best-of-three Ivy League Championship Series, he pitched 7.1 innings of scoreless ball—just as he did for the Cubs—as Dartmouth downed Cornell, 10-0, to advance to their first NCAA Regional in 22 years.

Alexi Pappas ’12, a filmmaker, essayist, and long-distance runner, is pictured while a student, with a NCAA trophy for a third-place finish in the 3000-meter steeplechase. (Photo by Eli Burakian ’00)

Hendrick’s Saturday outing wasn’t the only focus of the stories about him. His Dartmouth classmate Alexi Pappas ’12, herself an elite athlete, wrote an essay titled “From Shared Dartmouth Floor, an Ascension for Alexi Pappas and Kyle Hendricks,” which appeared in Saturday’s New York Times. The story recalls the pair’s time together as first-year students in Fahey Hall, where they lived along with more than a dozen other athletes.

“During our freshman year, it was thrilling to see how our Fahey floor evolved. Some people quit their sports and activities and long-distance relationships and major goals,” wrote Pappas, a filmmaker, essayist, and long-distance runner who competed for Greece this summer in the Rio Olympics. “We each progressed in our own way.

“That’s what’s so great about college: We’re given the gift of being surrounded by brave, curious people and limitless malleable energy. Balancing athletics, academics, and social dynamics in college (especially during freshman year) was thrilling, challenging, and scary in the good way,” Pappas wrote. “That’s what college is all about. We try to grow into the best versions of ourselves. For Kyle and me, that meant following our athletic dreams. But if it hadn’t, that would have been OK, too.”

Video: A Conversation with Kyle Hendricks ’12 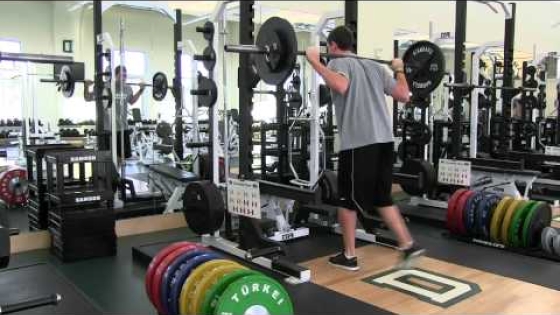