The political blogger says Dartmouth nurtured his love of politics, sports, and weather. 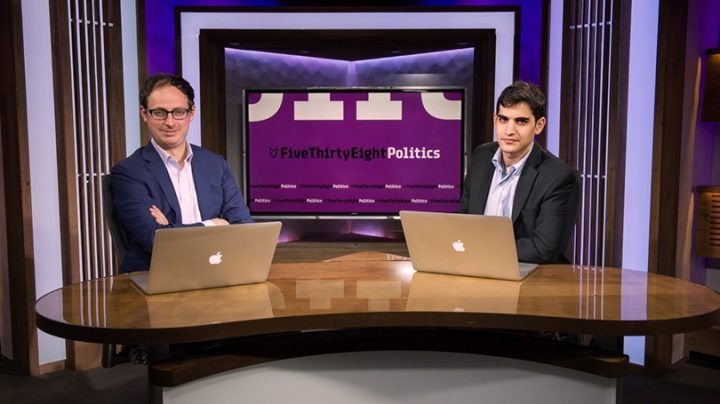 Harry Enten ’11 calls himself a horserace guy. His interest in politics, sports, and weather has always been about reading the odds. At Dartmouth, he devoted many late-night hours to his “Margin of Error” blog and to a weather email that mingled short-term forecasts with personal musings. The daily blast became widely popular with students and faculty. Enten parlayed this success to a job with renowned political handicapper Nate Silver working on FiveThirtyEight, a website known for crunching the numbers on a range of opinion polls to analyze politics, economics, and sports.

In a long profile published in October, Columbia Journalism Review calls Enten the epitome of a new political journalism that relies on number crunching over narrative. The story also describes the recent Dartmouth graduate’s quirky personality, quoting a co-worker at FiveThirtyEight: “I’d never in my life met a real person who is like this, talked like this, behaved like this, sounded like this.”

Enten spoke to Dartmouth News by phone from the FiveThirtyEight offices on New York’s Upper West Side earlier this month.

In a number of interviews, you said that you first got interested in politics when you went to vote with your father at age 4.

Right. That goes all the way back there. If you look at my interests across the board, they tend to all be fairly similar—whether it be politics and predicting elections, predicting weather, or even my first love of baseball—the idea of trying to figure out who’s going to win and who’s going to lose, that has been the case for a long time, and so to me the horserace is the most interesting part. That doesn’t mean that the other parts aren’t important; it’s just not where my interests and where my skills lie.

At FiveThirtyEight you’re not Harry Enten, you’re Whiz Kid Harry Enten. How did you get that moniker?

You’re going to have to ask Jody Avirgan about that. I think he just started calling me that one day. Obviously, if you’re calling me from that institution which I attended, you know that I only graduated five years ago, so I think my age certainly plays a large part in that. But I’d also argue that it sounds kind of funny because to hear my voice without knowing what my face looks like, most people tend to think I’m significantly older than I am.

Have you cultivated that persona?

I think that it’s certainly the case that I present myself as someone who’s a little quirky. If you follow me on Twitter, I tweet about old-time music and old-time television shows, so I think I definitely don’t play it down, but it’s not like I’m going out and calling myself “Whiz Kid.” I’ve never called myself that once before, although I think a romantic interest once called me that, which was kind of a little odd and interesting.

When you first came to Dartmouth, you already had an interest in statistics and politics and weather. Was there something here that spurred on those interests?

Well, I’ll give you a few things. Number one, part of the reason I came to Dartmouth was because of the first-in-the-nation primary. But I’d also point out that Dartmouth allowed me to do a lot of independent studies, and more than that, the professors were willing to work around what I was interested in. So, for instance, I might take a course on black religion and then write about how religion affects people’s views on same-sex marriage. That was something I was able to do because the professors were willing to allow me to spread my wings and write papers that were of interest to me but still revolved around the course curriculum. And I did that over and over again.

Are there particular professors you remember?

Dean Lacy; John Carey; Karen Gocsik, who’s no longer there; Bob Norman, Robert Norman– amazing guy, now well into his early 90s, who’s still emailing me. If I heard he’s still playing tennis, I’d believe it; Michael Bronski. People like that were very helpful and were willing to work with me in ways that perhaps other professors might not have been willing to.

Did you have a circle that was interested in politics in the same way you are?

I don’t necessarily think so. I think my whole thing was, you know, where I really developed interests was being in a dorm room and basically writing on my blog, “Margin of Error,” at 6 a.m. I participated in some events, but for the most part that really wasn’t what I was all about. In some ways I went to my own drummer, but that didn’t mean I didn’t get out or didn’t do things; it was just that when I was working on stuff, it was the political stuff that I did and then there was other stuff that I did and I think that they were separate from one another.

Being, it seems, a pretty deeply ingrained New Yorker, how did you cope with living in New Hampshire?

Oh, easy. The fact is I love snow. That was part of the reason I also came up to Dartmouth. I wanted a chance to forecast snow more frequently, and so it was really no big deal. I may be a New Yorker, and you can certainly hear it in my accent, but the fact of the matter is that I enjoy hanging out with people; I enjoy watching the snow fall; and I don’t enjoy going to Broadway plays; I don’t enjoy going to see the Statue of Liberty. These are not things for me. I enjoy being able to hang out with people, and Dartmouth and Hanover allowed me to do that.

Tell me about your weather email. How many people got your blasts?

When I was up there, it was at least 200 to 400 people, probably. I don’t remember what the exact statistic was, but I was getting it out there, for sure. It was probably at least about a tenth of the student body, including—well, it was students and professors, a mixture of both of them. Basically within the email there was predicting of the weather and then there were some personal anecdotes that went around. They could range from the frivolous to the very serious. I managed to keep it up during, after college; and in fact, that’s how I keep up with a lot of my classmates after college, is through that, and them responding to it occasionally.

How did that come about? How did people find out about it?

I think I just started it. I just started it and started sending it out to a few people and then the word spread. Some people find it boring. There are certainly some people who, after initially asking to be on it asked to be taken off of it, which is perfectly fine. I’m not exactly sure why people find it entertaining. But I started with maybe a dozen people on it, and then it just grew from there and was able to build up over time, I think for a number of reasons: Number one, I think everyone is interested in the weather; and number two, if you can throw a little humor in from time to time, I think it generally works to make people feel good about themselves and so then they get a good laugh.

You say you still have this email?

Oh yeah. I absolutely do. I restarted it. There was a little break during the past year for certain reasons, but I restarted it up last month and picked it right up from where we started, had people re-sign up for it. We’ve got well over 300 people right now who are receiving it. There’s some weather going on. It’s not the multiday forecast anymore for Hanover, though we do still have a one-day forecast for Hanover.

If you want. Here, I have a signup form and anyone can sign up, although I grant that I don’t tend to allow my mother to sign up because she’s sometimes overly critical of me. I love my mother, but she has been banned from the weather email. People can sign up for it. I’ve mostly friends right now, but I’ve had a few randos who also signed up for it.

What were you doing in D.C.?

We did an internship at NBC News. It was a great experience for me, and I still stay in touch with the people with whom I did the internship. Invaluable experience.

Yeah, there was blogging that went on, sure, on the NBC News political website with Mark Murray and Domenico Montanaro. Mark Murray is still there; Domenico is now with NPR, but I keep in touch with both of them. It was a very good experience.

You are no longer a Mets fan. Why is that?

Well, basically, I can describe it like this: My father was a huge New York Giants baseball fan, so obviously the Giants and Dodgers used to play in New York. The Dodgers played in Brooklyn; the Giants played at the Polo Grounds in northern Manhattan. When both the teams moved out to the West Coast, the Mets were supposed to replace the Giants and Dodgers. They did for a while, and they still do, but then the current owners of the New York Mets decided to build a stadium that looked exactly like Ebbets Field with monuments to the Dodgers. Once that occurred, I really lost a lot of interest because I felt that to be an insult to the Giants.

How about that Kyle Hendricks ’12, the Cubs’ ace? He is also a Dartmouth alum.

What’s your call for the World Series?

Do you have any loyalty to the Giants anymore, now that they’re in San Francisco?

No, not really. My real loyalty in professional sports is the Buffalo Bills, and that doesn’t really lead me very much of anywhere.