The alumnus returns to campus Friday to talk about “polls, predictions, and American politics.” 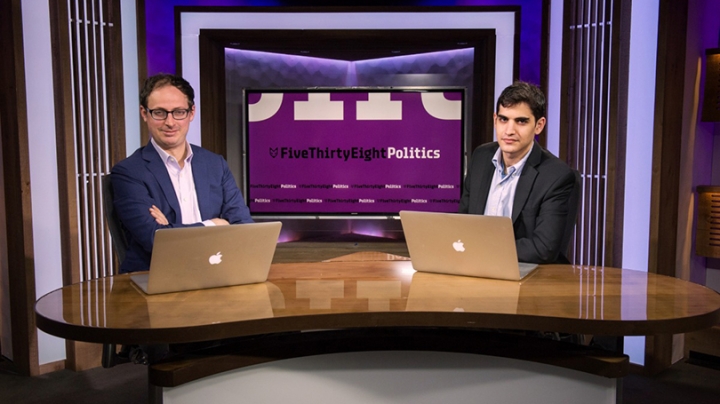 Harry Enten ’11, right, and Nate Silver try out the new set at FiveThirtyEight’s offices in New York. Enten returns to campus this week to give a public talk about the 2016 election. (Photo courtesy of FiveThirtyEight)
1/30/2017
Body

Less than 10 years after taking “Introduction to American Politics” and “Advanced Political Analysis” at Dartmouth, FiveThirtyEight’s Harry Enten ’11 returns to campus Friday to headline a public discussion on the state of political polling in the wake of the 2016 election.

“It will be a fun time for all, so come check it out. We’ll have a little discussion,” says Enten, whose encyclopedic knowledge of American political statistics and engaging blogging style landed him a job right out of Dartmouth as senior political writer and analyst for Nate Silver’s popular FiveThirtyEight website.

The Feb. 3 program, titled “Aftermath: What the 2016 Election Taught Us About Polls, Predictions, and American Politics,” runs from 4 to 5:30 p.m. in Filene Auditorium. The event is free and open to the public.

Enten says he looks forward to a lively discussion on Friday night.

“I’m a big fan of questions and answers. This was such a unique election and there are so many thoughts I have on different subjects, that rather than me telling people what I think is important, I’d rather they tell me what they’re interested in and I can give my points of view on it,” he says.

In public discussions since the election, Enten has found that some people want to know how the polls could have missed Donald Trump’s impending victory, and then there’s a group of people interested in “what the heck happened?”

Noting that he posted a story on Nov. 4 with the headline “Trump Is Just a Normal Polling Error Behind Clinton,” Enten says he is more than willing to talk about how so many polls had Hillary Clinton winning easily.

“We can discuss whether or not forecasting was better in the primary versus the general election, and what we can change. That’s an interesting discussion,” he says. “I also think there’s a rather interesting discussion to have about how Trump put together the electoral coalition to win. I’m happy to talk about both of those subjects, and hopefully we will.”

At the invitation of government professor Dean Lacy, Enten will speak in two of the same classes he took from Lacy less than a decade ago. Lacy also arranged for Enten to visit a class on interpreting patient survey results at The Dartmouth Institute for Health Policy and Clinical Practice (TDI).

Lacy says he hopes the encounter will show the undergraduates in his government classes that there are many possible career paths for students of American politics and statistics.

“One of the very interesting things about Harry is he cut his own path in this world. He created a job that was new to the job market—that didn’t exist before Nate Silver came along—and he’s now expanded it,” Lacy says. “He’s somebody who just knew that he wanted to predict election outcomes from the moment he visited Dartmouth when he was a high school student.”

Will it feel odd to lecture in front of the classes he took as an undergraduate?

Not really, Enten says. He remembers correcting Lacy about the percentage by which a certain Republican defeated the Democrat in a Georgia senate race, extending the figure by an additional decimal point.

“If you speak to some of the students, they’d say that back in my day as a student that perhaps I acted as if I thought I should have been in front of the class,” Enten says. “I knew the things that I knew and wanted to show it off.”

His message for future data journalists?

“One of the things I want to convey to any of these students is to broaden your sample sizes and to expect the unexpected. Don’t give anything a zero possibility of occurring. Strange things happen. They may not be probable, or likely, but they’re possible, and we all need to recognize that.”

Enten’s visit is sponsored by the Department of Government, TDI, the Program in Quantitative Social Science, and the Nelson A. Rockefeller Center for Public Policy.