The alumnus outlines some of the paths and obstacles to a more energy-efficient future. 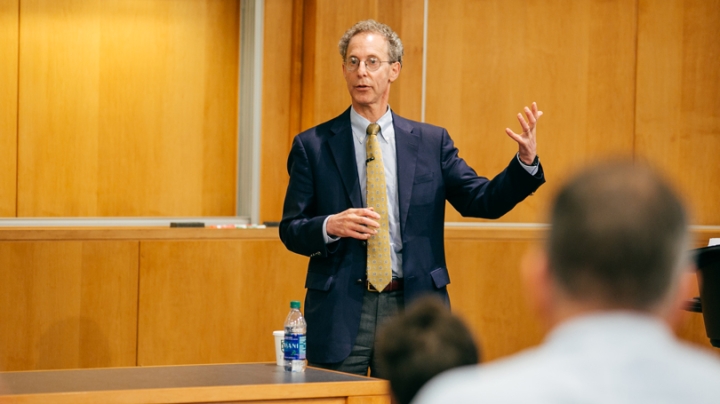 Dan Reicher ’78 told the audience it is an exciting time to be a student researcher interested in the junction of energy and society. (Photo by Robert Gill)
10/18/2016
Body

About 150 people crowded into the Georgiopoulos Classroom at the Tuck School of Business Friday to hear Dan Reicher ’78 deliver the inaugural lecture for the new Arthur L. Irving Institute for Energy and Society.

Reicher, the executive director of the Steyer-Taylor Center for Energy Policy and Finance at Stanford University, spoke about how technology, economics, and policy must play interrelated roles to create clean energy in an era of climate change. He predicted that the institute will bring together all three of those fields to drive research, not only in the way energy is produced, financed, and regulated, but also in the way people conserve or consume it.

“Beyond engineering, beyond business, beyond the usual ways we think about energy, I think there’s a network to be developed across this College, where you’ve got some strong foundations built. And now they can be connected and expanded,” said Reicher.

“Forty-eight trillion dollars is what we are going to spend on energy between now and 2035. How we spend those dollars—roughly 1.8 trillion is what we are spending now—on the relative mix of energy sources is going to have a lot to say about what the energy future looks like,” he said.

Reicher noted that incremental but important changes—such as LED lighting and efficient refrigeration—are demonstrably lowering energy consumption in many parts of the world. As an example of promising new technology, he showed a video about a Norwegian company designing floating platforms for wind turbines in deep ocean water. Reicher explained how carbon emissions from power plants and manufacturing facilities are being captured and pumped underground to stimulate more production in existing oil fields. He also cited other examples of alternative energy, including solar and hydropower, that are attracting major investors, including Goldman Sachs and J.P. Morgan. “They see an opportunity not only to do good,” he said, “but to do well.”

Sreevalli Sreenivasan, pursuing a master’s degree at Thayer School of Engineering, said Reicher’s lecture laid out major issues she expects the Irving Institute to explore in the future, and said she’s sorry she won’t be here two years from now, when it’s up and running.

“I am very interested in ways of storing energy,” she said. “And I have been interning for a wind energy company, but the information about offshore turbines—a lot of that was new to me. The biggest takeaway, though, was that the greatest obstacles to renewable energy development are not technological, but have more to do with finance and policy.”

At the end of the lecture, one student asked Reicher if he thought researchers supported by the institute, which was founded with donations from the Canadian oil company and its founder, Arthur Irving, would be free from bias.

“How you end up spending this money, the degree of independence, the focus areas, the results—those will be the key questions,” Reicher answered. “But I’m optimistic there will be academic independence in the work that is done.” He added that money from oil interests, including the Rockefeller family, has funded worthwhile social causes throughout American history at universities and other nonprofit organizations.

Reicher said it’s an exciting time to be a student researcher interested in the junction of energy and society. At Stanford, he said, these undergraduates often figure out fairly quickly what their strengths and passions are, as they veer naturally toward science, policy, or economics. But Reicher also warned against following too narrow a path into the energy sector.

“Too often people go into one technology door—you know, ‘I’m interested in solar.’ Or people will say, ‘I come from Texas, so I’m just really interested in oil and gas.’”

It’s better, he says, for students to take a wide, multipronged approach to energy issues, drawing on business, economics, government, engineering, and the liberal arts. Reicher’s own career has spanned much of that territory. He’s directed climate change and energy initiatives at Google, has been president and co-founder of a private equity firm investing in clean energy projects, and has also served in government, as assistant secretary of energy for energy efficiency and renewable energy during the Clinton administration.

During the day he spent on campus, Reicher met with students and President Phil Hanlon ’77 to talk about how Dartmouth’s curriculum might incorporate more energy education and research across disciplines, at more than one academic level.

“Perhaps there could be kind of a common core,” he suggested, “say, an energy economics course, an energy engineering course, and an energy policy course—not just for students in those majors, but for others who have an interest in those topics. We have courses like that at Stanford and there is a lot of student interest in them.”

Reicher said he enjoyed being back in New England at the peak of foliage season and visiting his daughter Haley Reicher ’17, who attended his lecture.