‘Excellent Sheep’ Author to Speak in Defense of Humanities

In a Nov. 1 talk, William Deresiewicz will argue that the humanities are for everyone. 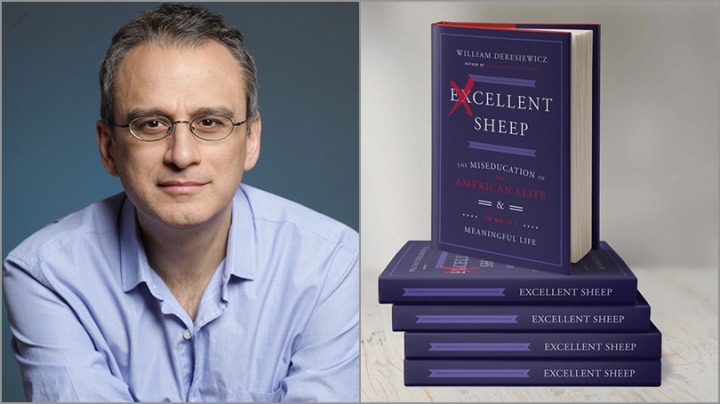 Studying the humanities is a politically significant act, says William Deresiewicz, the award-winning author of the bestselling Excellent Sheep: The Miseducation of the American Elite and the Way to a Meaningful Life.

In a Nov. 1 lecture titled “Politics, Privilege, and the Humanities,” Deresiewicz will make a case for “giving everyone who goes to college the opportunity and the financial support” to study the humanities, he says. The talk, which is free and open to the public, begins at 4:30 p.m. in Filene Auditorium.

In a recent TEDx talk, Deresiewicz argued that there is a direct correlation between rising tuition costs—and skyrocketing student debt—and the precipitous decline of public spending on higher education since the 1970s.

That decline, he says, has turned many students away from the liberal arts, and particularly humanities fields such as philosophy, religious studies, languages, and literature. But the skills developed by studying the humanities—critical thinking, creativity, and self-reflection—are foundational to a functioning democratic society.

“What’s at stake,” he said, “is not just individual opportunity or national prosperity, although both of those are. What’s at stake finally is our political liberty. The reason that the liberal arts are called the liberal arts is that they are understood to be the kind of education that’s appropriate to free people.”

A prolific essayist and critic whose work has appeared in The New York Times, The Atlantic, Harper’s, The New Republic, and The London Review of Books, among other journals, Deresiewicz is also the author of A Jane Austen Education, in which he details how, as a young man, his pride and prejudice (so to speak) against Austen’s reputation was undone by a close encounter with her novel Emma.

A contributing writer for The Nation and a contributing editor for The American Scholar, Deresiewicz is the recipient of the Hiett Prize in the Humanities, the Balakian Citation for Excellence in Reviewing, and a Sydney Award, and has been nominated for a National Magazine Award three times. A frequent speaker at colleges, universities, and high schools, he has taught English at Columbia and Yale and has held visiting positions at Scripps College and Claremont McKenna College. He is currently the NEH-Hannah Arendt Center Visiting Distinguished Fellow at Bard.

“The series is an initiative to affirm the continued centrality of the humanities to a 21st-century liberal education,” says Barbara Will, associate dean of the faculty for the arts and humanities. “By bringing in major, provocative speakers, we hope to spark debate around key issues facing our society today, and to showcase the skeptical, rigorous thinking necessary to address those issues.”

In the spring, the series will bring public intellectual and activist Cornel West back to campus. West, who is a professor of philosophy and Christian practice at Union Theological Seminary and professor emeritus at Princeton University, last spoke at Dartmouth in 2013 as part of the annual seminar and public lecture series organized by the Gender Research Institute at Dartmouth.

Being uncomfortable is part of growing. And so I want them to take away this idea we talk about as a ‘brave space,’ that it’s OK to fail and get up. And those are some of the best challenges that you encounter.