Atifete Jahjaga will take the interns’ work to the country’s prime minister. 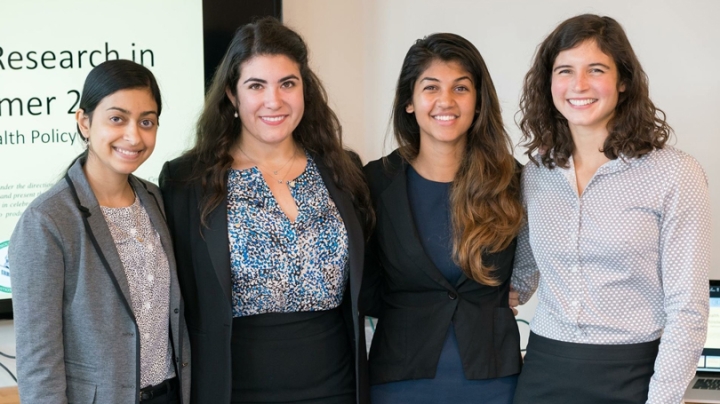 After a summer in Kosovo conducting a national study of women’s access to health care, four Dartmouth students had the chance to present their policy report to the country’s former president, who was in residence at Dartmouth as a Montgomery Fellow.

“The students’ findings clearly reflected the situation in the country as I know it,” says Atifete Jahjaga, whose Dartmouth fellowship was also supported by the John Sloan Dickey Center for International Understanding.

“This is useful work. Upon my return to Kosovo I am happy to pass on the findings to the prime minister and the minister of health so they can address this issue and work on improving the public health policy in Kosovo,” says Jahjaga, the first woman to serve as president of the Balkan nation.

“It was a great opportunity for our students to engage in team-based policy research for an actual international partner,” says Anne Sosin ’02, who managed the health policy research project as part of the Dickey Center’s Global Health Initiative.

The interdisciplinary program is run in partnership with the Nelson A. Rockefeller Center for Public Policy, the Tuck School of Business, and the Geisel School of Medicine. It was funded by the Experiential Learning Initiative at the Dartmouth Center for the Advancement of Learning, known as DCAL.

“The Kosovo project was developed as a new model for experiential learning, which we are planning to build on with future projects,” Sosin says.

The students were completing their analysis and policy report when they learned that they would be presenting their findings to Jahjaga.

“So it was very exciting when Dickey and Rocky informed us that we would be able to present to the former president of Kosovo,” she says. “That’s a very rare opportunity.”

In preparation for the project, the students studied with Ronald Shaiko, senior fellow and associate director of curricular and research programs at the Rockefeller Center, working in the center’s Policy Research Shop. The research shop does policy work for the Vermont and New Hampshire legislatures and conducts an annual New Hampshire State of the State poll.

“This was truly a capstone experience for the students,” says Shaiko. “They have taken what they have learned in the Policy Research Shop and embedded themselves within the client organization—Kosovo Women’s Network—in Pristina for three months in order to conduct a comprehensive assessment of survey data collected in a nationwide survey on the state of health care in Kosovo. I could not be more proud of the team.”

The Kosovo Women’s Network’s report was the first of its kind in that country. “So at first it was honestly very intimidating,” Dixit says.

“Then to talk to the president of Kosovo, and for her to stand up and say, ‘Everything you are saying makes a lot of sense, we’ve known it anecdotally, but the fact that you have shown it by data is really exciting,’ was amazing. It was incredibly fulfilling to hear that,” Dixit says.

In preparation for their work with Kosovo Women’s Network, the students also received training in project management through the OnSite Global Consulting at Tuck, learned about public health policy through the Center for Health Equity at Geisel, and worked with faculty who were visiting the University of Pristina through Dickey’s Transformational Leadership partnership. The visiting professors lectured on the cultural and political history of Kosovo, particularly in the aftermath of the war that followed the dissolution of the former Yugoslavia in the 1990s.

“This project builds on, and would not have been possible without, Dartmouth’s longstanding partnerships with Kosovo,” Sosin says.

The project was not solely about understanding policy in a purely academic or theoretic sense, but in applying this research methodology in a much more complex global environment, says Sosin.

“To translate that learning into a global context, where you need to navigate cross-cultural barriers to function in a very different institutional environment and to work on challenges that may be very unfamiliar, really requires them to take that learning to a new level,” Sosin says.