KPMB Architects has won over 250 awards for projects across North America. 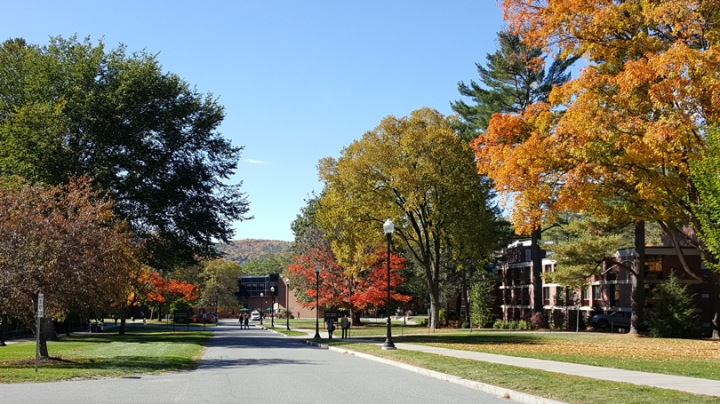 The Arthur L. Irving Institute for Energy and Society will be housed in a new building on the west end of campus, between the Tuck School of Business and Thayer School of Engineering. (Photo by Corinne Arndt Girouard)
11/10/2016
Body

Leading Canadian firm KPMB Architects will design the new home for the Arthur L. Irving Institute for Energy and Society at Dartmouth.

Founded in 1987 and based in Toronto, KPMB has won more than 250 awards for projects across North America. The firm has been recognized by the American Institute of Architects, the Urban Land Institute, and the Royal Institute of British Architects, among other organizations, for innovative buildings that cultivate community and achieve significant energy savings. The founding partners, Bruce Kuwabara, Marianne McKenna, and Shirley Blumberg, are recipients of the Order of Canada, the highest national honor awarded to citizens contributing to community and culture.

“The Irving Institute building is really important because energy is an interdisciplinary topic,” says Robert Hansen, the Norman W. Martin 1925 Professor of Business Administration at the Tuck School of Business. Hansen chairs the task force leading the launch of the new institute. “It involves all parts of the College, so we want the building to bring people together in a place where they really want to be. It has to facilitate collaboration, both formal and informal. The institute is going to have teaching and students at its heart so it has to be welcoming to students as well as faculty.”

John Scherding, Dartmouth's associate vice president for planning, design and construction, says KPMB was the clear choice among three finalists for the job. “They understood what we were asking for and responded with superb qualifications and a high-quality proposal.”

One of the firm’s strengths, Scherding says, is having a clear understanding of the challenges and opportunities presented by the site adjacent to the Murdough Building, connecting the Tuck School of Business and Thayer School of Engineering.

“The site is at the end of a strong axis from Baker Tower right down Tuck Mall,” says Scherding. “This firm spoke in a really interesting way about that. They said, ‘We don’t want to put a monument at the end of the axis. You can’t compete with Baker Tower. There’s energy coming down Tuck Mall and we want to receive that energy—like a catcher’s mitt.’ ”

Of course, he adds, that’s just a figure of speech. The building will in no way resemble a catcher’s mitt. In fact, it’s too early to know what it will look like, because the firms invited to campus for the final interviews were asked not to bring preliminary designs. Scherding says the design committee was more interested in choosing architects who would collaborate with the College to arrive at an architectural solution that meets the goals of the Irving Institute. KPMB will also be collaborating with a German-based engineering firm that specializes in high-performance, sustainable energy systems.

“An energy institute obviously needs to be environmentally sustainable, and those innovations also need to be visible to the users of the building,” says Hansen.

The College expects to break ground by late spring or summer 2018, aiming for completion by 2020, Hansen says.