Dartmouth’s Early Admissions Are a ‘Record Pool of Talent’

The number of students applying early-decision this year is up almost 4 percent. 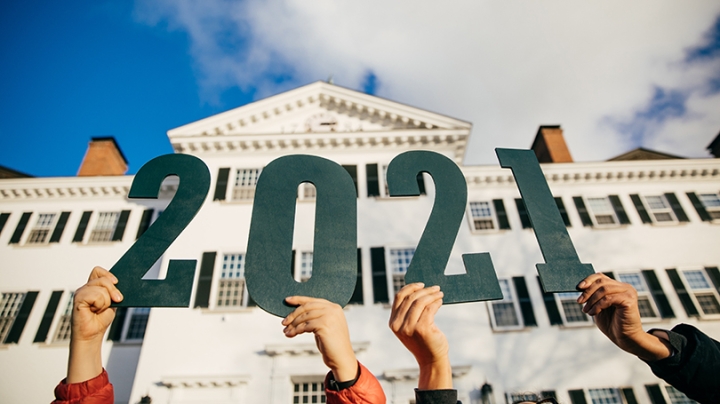 They come from California, Florida, Maine, Montana, Vietnam, and Brazil. They’ve farmed blueberries, managed bluebird conservation areas, and designed shoes for Nike. They’ve started businesses and taught themselves to code. Collectively, the 555 students admitted early decision to the Class of 2021 make up one of the most intellectually engaged and diverse groups Dartmouth has ever accepted.

“The numbers are impressive,” says Lee Coffin, vice provost of enrollment and dean of admissions and financial aid, of the students chosen from among 1,999 early-decision applicants—the largest early-decision pool in Dartmouth’s history, up 3.7 percent from last year. “I’m delighted to welcome these first members of the Class of ’21 to the Big Green community.”

The students learned of their acceptances today at 4 p.m. via a secure website, and the admissions office encourages accepted students to share their news on social media with the hashtag #Dartmouth21s. Students have until Dec. 21 to submit their enrollment forms.

This year’s applicant pool reflects what Coffin characterizes as a significant increase in both academic quality and socioeconomic diversity. By applying early, these students—who will make up approximately 47 percent of the incoming class—have identified Dartmouth as their first-choice college. “We considered a record pool of talent,” says Coffin. “The applicants represented remarkable academic and personal excellence across many measures, and it’s exciting to see them identify Dartmouth as their first choice.”

Among the academic indicators he points to: 92 percent of the admitted students are in the top 10 percent of their high school classes, up from 90 percent last year. Mean SAT scores jumped 33 points, to 1468, and the mean ACT composite is 32.

“Ninety-two students are ranked first or second in their class and will in all likelihood be valedictorians or salutatorians—last year that number in the ED round was 38,” Coffin says. “We saw a noteworthy uptick in the number of students drawn to Dartmouth because of our reputation for excellence in teaching as well as the opportunities for intellectual engagement in an interdisciplinary liberal arts curriculum.”

The admitted students include 26 who applied to Dartmouth through the College’s partnership with QuestBridge, a national access organization that helps identify talented students from low-income backgrounds and match them with top colleges and universities. This is by far the largest cohort of QuestBridge students Dartmouth has ever accepted early, Coffin says; in past years, an average of three to six students have matriculated from the program during the early-decision round. Of the QuestBridge students accepted this year, 42 percent are ranked first or second in their high school classes.

Dartmouth accepted two students through Bridge2Rwanda, a program that helps match talented African students with colleges in the United States.

Overall, the accepted students are a highly diverse group, Coffin says. Thirty-one percent are students of color; 8.3 percent are foreign citizens. More than 10 percent are first-generation college-bound in their families. Students whose parents attended Dartmouth make up 16 percent of the class.

More than half of the admitted students—52 percent—have applied for financial aid, up from 48 percent last year, and at least 11 percent are eligible for federal Pell Grants.

Accepted students represent 45 states plus the District of Columbia and Puerto Rico and 22 countries outside the U.S. For the first time, residents of California comprise the largest contingent in the early-decision class and 445 different high schools—51 percent of which are public or charter schools—are also represented. Two of the students have been home schooled, 34 percent attend independent schools, and 13 percent attend schools with religious affiliations.

“When President Hanlon talks about making Dartmouth a magnet for talent, these students are exactly who he’s talking about,” says Coffin. “These are high-impact people who have chosen us. I am so excited about the contributions they will make to the Dartmouth community—and to the world when they graduate.”