Hany Farid Honored by the National Academy of Inventors 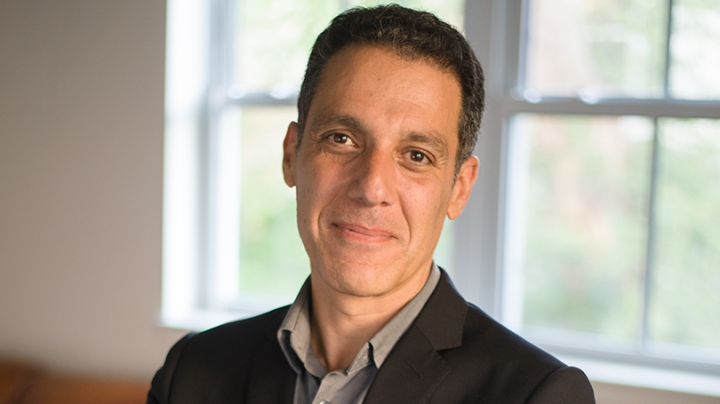 Hany Farid, the Albert Bradley 1915 Third Century Professor and chair of the Department of Computer Science, has been named a fellow of the National Academy of Inventors (NAI).

NAI fellow status is granted to academic inventors “who have demonstrated a highly prolific spirit of innovation in creating or facilitating outstanding inventions that have made a tangible impact on quality of life, economic development, and the welfare of society.” NAI President Paul Sanberg wrote to Farid, “Congratulations on this great achievement and recognition as a truly prolific academic inventor.”

“I am thrilled to see the institute honor Hany,” says Martin Wybourne, senior vice provost for research and the Francis and the Mildred Sears Professor of Physics. “I remember sitting in his office many years ago talking about the fundamental ideas behind his work in digital forensics. It has been amazing to see how he has developed his ideas, which now have a major impact on society.”

Farid is being recognized for his research in image analysis and digital forensics, a field he pioneered at Dartmouth. He has developed mathematical and computational techniques to determine whether images, videos, or audio recordings have been altered. A noteworthy application was Farid’s forensic analysis that demonstrated the authenticity of the controversial photograph of Lee Harvey Oswald holding the alleged assassination rifle. Farid also helped develop a system to find and remove online images pertaining to child exploitation, and is developing a new system to scrub the Internet of extremist-related content.

“Much of the credit for this recognition should go to the remarkable young women and men who have worked in my lab over the past 18 years,” says Farid. “Their energy, creativity, and hard work have led to exciting innovations with real-world applications.”

“I am very pleased to welcome Hany Farid to the growing group of Dartmouth fellows of the National Academy of Inventors,” says Eric Fossum, a professor of engineering at Thayer School of Engineering, the associate provost for entrepreneurship and technology transfer, a founding member of NAI, and a fellow since 2012. “His selection from a highly competitive field of nominees speaks to the significant and positive impact Farid has made on society through his inventive and commercialized work in photo forensics, a field he has pioneered here at Dartmouth.”

The induction ceremony for new fellows will take place on April 6, 2017, at the John F. Kennedy Presidential Library and Museum in Boston.

The NAI was founded in 2010 to recognize and encourage inventors with patents issued from the U.S. Patent and Trademark Office, enhance the visibility of academic technology and innovation, encourage the disclosure of intellectual property, educate and mentor innovative students, and translate the inventions of its members to benefit society.