Dartmouth News reached the far corners of the Earth in 2016. 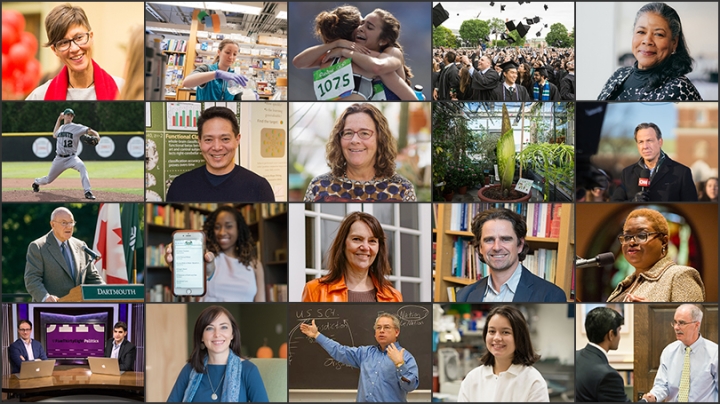 Dartmouth News stories of all stripes saw lots of traffic this year, from readers on every continent—including Antarctica—and in almost every nation of the world. More than half a million readers made more than 900,000 visits to the site, for nearly 1.4 million page views of stories, videos, and slideshows.

Here are some highlights of the 370 stories published in 2016, showcasing what makes the College distinctive: our campus, scholars who love to teach, adventurous students using Dartmouth as a base to explore the world, and the College’s abiding commitment to the liberal arts.

To keep up with Dartmouth News in 2017, subscribe to daily and weekly email updates. View Dartmouth’s year in photos in our 2016 gallery.

World-Class Faculty, at the Top of Their Game

Dartmouth’s scholar-teachers received national and international recognition this year for many things, including work that sheds new light on how attention works in the brain. A biologist who studies how plants absorb metals from soil was named a member of the National Academy of Sciences (NAS). And four faculty members were named fellows of the American Association for the Advancement of Science (AAAS) for their contributions to the understanding of primate evolution, the science of decision-making, protein folding, and the biodiversity of polar and desert ecosystems. English professor and poet Cynthia Huntington and historian Darrin McMahon won midcareer fellowships from the Guggenheim Foundation; poet Vievee Francis, an associate professor of English, won the Hurston/Wright Legacy Award for Poetry for her collection of “antipastoral” poems; and two computer scientists staged a “Turing test” for the arts to see if computers could create music and poetry as well as humans (spoiler: not yet).

Kaya Thomas ’17 shows the computer app she created, called “We Read Too.” (Photo by Eli Burakian ’00)

Engaged Students Take On the World

Students continued to use Dartmouth as a launch pad for big dreams. Valedictorian and former English major Sarah Waltcher ’16 received a Rhodes Scholarship to pursue graduate study at Oxford University. Three Dartmouth students were named Schwarzman Scholars—a “Rhodes in China” for study in Beijing—in the first two classes in that program’s history; and eight received Fulbright and DAAD scholarships to study and teach around the world. King Scholar Anela Arifi ’20 gave a TED Talk on using chicken feathers as source of alternative energy; student immigration-reform activists lobbied for a policy change at the Library of Congress; a student from the Pine Ridge Reservation applied theory from a Native American studies course to the practice of protest at Standing Rock; theater students and faculty staged an Off-Broadway production to strong reviews; and computer science major Kaya Thomas ’17 received acclaim from Michelle Obama, among others, for developing an app to help kids find books by and about people of color.

Students celebrate at the end of the commencement ceremony. (Photo by Eli Burakian ’00)

Our Campus, Our Community

In the spring, students offered admission into the Class of 2020 included a cohort of 10 military veterans selected through a new partnership between Dartmouth and the Posse Foundation. Last week, the admissions office announced the first members of the Class of 2021, selected from a record pool of early-decision applicants. During June’s commencement ceremonies, 1,867 students received Dartmouth degrees. The commencement speaker was Nobel Peace Prize Laureate Leymah Gbowee, who found time during her visit to meet with students to discuss the realities of human rights activism. This fall, the campus celebrated the launch of six house communities—a new residential system for all undergraduates, led by house professors (including Melanie Taylor, an associate professor of Native American studies, who took on the leadership of North Park House mid-term). Morton Hall caught fire from an unattended grill, displacing nearly 70 students—without injury, fortunately—and inspiring an outpouring of community support. The iconic tower and bell of Baker-Berry Library received a meticulous renovation and a new sound system, and construction began on the new Moosilauke Ravine Lodge. In September Morphy the corpse flower—a rare and stinky example of Amorphophallus titanium, which flowers once every seven years—bloomed in the Class of 1978 Life Sciences Center greenhouse. Students had a firsthand view of presidential politics, from the New Hampshire primary in February through the Nov. 8 election. Among the political players students met on campus this year: Bill and Chelsea Clinton, Jeb Bush, Bernie Sanders, and John Kasich.

In 2016, the board of trustees formalized the creation of a School of Graduate and Advanced Study, the first new school at Dartmouth in a century. Thayer School of Engineering made history when it graduated its first majority-female class of engineers. Thayer also received a major gift to expand its facilities and increase the size of its faculty. Geisel School of Medicine underwent a reorganization to address a structural budget deficit, The Dartmouth Institute for Health Policy and Clinical Practice welcomed the inaugural class of a new low-residency master’s of public health program, and the Tuck School for Business launched a new bridge program designed to help veterans and elite athletes build careers in the business world.

Laurel Richie ’81 is the first African American woman to chair the board of trustees. (Photo by Robert Gill)

Leadership Committed to the Liberal Arts

The board of trustees selected Laurel Richie ’81 as its first African American woman chair this fall, and new people were named to lead the Hood Museum of Art, the College library system, the Tucker Center, and the Hopkins Center for the Arts. Lee Coffin was named vice provost for enrollment and dean of admissions and financial aid, and Samson Occom Professor of Native American Studies N. Bruce Duthu was named the Frank. J. Guarini Associate Dean for International Studies and Interdisciplinary Programs.

The president sailed on the scientific research vessel the Akademik Sergey Vavilov, built in Finland to conduct oceanographic soundings and now refitted as a tourist vessel. (One Ocean Expeditions/ Ira Meyer)

President Phil Hanlon ’77 traveled to the Arctic this summer to see firsthand the effects of climate change and the impact Dartmouth research is having in the region. On Earth Day, President Hanlon announced the creation of a Sustainability Task Force to identify ways of reducing Dartmouth’s carbon footprint, and in September he announced the new Arthur L. Irving Institute for Energy and Society, an interdisciplinary center to study how to meet the world’s energy needs sustainably. The College released an action plan to improve inclusivity and diversity on campus and continued to make progress on the goals of the Moving Dartmouth Forward initiative. In addition, Dartmouth changed its approach to intellectual property, allowing faculty more control over their own patents.

The Hill Winds Know Their Names

Dartmouth alumni made their marks in 2016, on campus and around the world. The Hood acquired the complete archives of renowned war photographer James Nachtwey ’70. Nine alumni competed in the Summer Olympics in track and field, cycling, rowing, and dressage. Runner Abbey D’Agostino ’14 didn’t win a medal in Rio, but she won hearts the world over for her sportsmanship. Cubs pitcher Kyle Hendricks ’12 contributed to Chicago’s first World Series victory since 1908. In the spring, Eric Fanning ’90 was sworn in as secretary of the Army, after eight months of waiting for Senate confirmation. Martha Pollack ’79 and Richard Lifton ’75 were named president of Cornell University and Rockefeller University, respectively. During election season, “Whiz Kid” Harry Enten ’11 of the political data-crunching website FiveThirtyEight provided must-read interpretations of the polls. Alumni had roles in both major parties’ political conventions. And BuzzFeed celebrated 10 “alumni”—from Stephen Colbert to mad man Pete Campbell to Dr. Meredith Grey—who never actually matriculated.