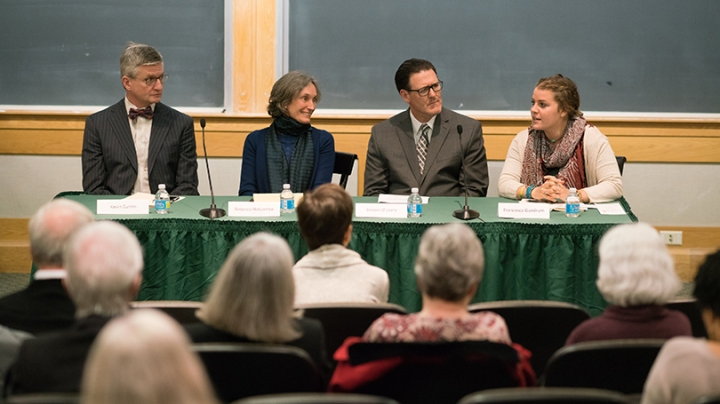 The 2017 Martin Luther King Social Justice Award ceremony opened with inspiring music, and closed with a conversation among awardees about how to fight for the rights of those who can't advocate for themselves.

On Jan. 26, at Filene Auditorium in Moore Hall, this year’s five awardees were recognized for their work in education, legal services, and climate change activism. They also participated in a lively panel discussion called “Conversations with Change Makers.”

Evelynn Ellis, vice president for institutional diversity and equity, served as emcee for the ceremony, which began with music from the Rockapellas, an all-female a capella group whose repertoire includes many songs about freedom and justice.

During the panel discussion, awardees traced the roots of their activism.

Ellis read from Greenhalgh's written statement, as he was unable to attend due to illness. “I was brought up in the projects of Manchester, England, in a slum without indoor plumbing or central heating,” Greenhalgh wrote. In 1978, he took the job at the Tuck School of Business because Dartmouth was “living up to its values" of diversity and inclusivity.

“We have now served more than 7,000 businesses. And we broadened the scope to include women, Native Americans, people with disabilities, veterans, and the LGBTQ community. We gave them the tools to succeed so that social discrimination wasn’t made worse by economic discrimination,” wrote Greenhalgh.

Accepting the student group award, Francesca Gundrum ’17 said she first got involved in environmental issues while traveling the world working for research groups protecting whales, rhinos and turtles. “So my window on social justice started with animal rights,” she said. She joined Divest Dartmouth, she said, because it seeks to have a global impact.

For Shawn O’Leary, the flame of social justice was sparked by conversations he had with his Native American grandmother, who was forcibly enrolled in a boarding school where she was abused. He later developed minority recruitment and retention strategies at Geisel.

“I am surrounded at Geisel by heroes—elders and mentors who walk the walk. Small acts of kindness go a long way in this world,” O’Leary said.

Holcombe also had an influential grandmother, who immigrated to the United States as a young child.

“Her mother died at an early age and her father was an alcoholic, so she landed in foster care. But because of public school she was able to learn English and get a job,” Holcombe said. Holcombe graduated from Brown University, earned her EdD from Harvard, and directed Dartmouth’s teacher education program before becoming Vermont’s top education official.

“I am here today because I was lucky,” she said, “but I went into public education because I really believe it can’t be up to luck. Public education is about ensuring that every child—no matter where they’re born, what their color, their gender identity, or birth language is—has the opportunity to do their best.”

Kevin Curnin ’86 also sees education as key to lasting social justice. The liberal arts are important, he said, because they promote open, honest dialogue. “Social justice is a conversation,” Curnin said. “Now more than ever, we need to listen, make arguments, and find common ground.”

And he urged the audience to avoid despair.

“The problem, when you get social justice types like us in one room, is that we can make ourselves feel pretty sad. But we need to remind ourselves that good things are happening, and that there is social justice out there, even though our institutions are a little misshapen right now—a little bent, and a little broken.”

The panelists agreed that now is not the time to lose hope, or stop fighting for an equitable, sustainable world. And they urged young people in the audience to work locally, as well as nationally and internationally, for worthy causes.