The museum renovation is a chance for students to learn skills in a new space—online. 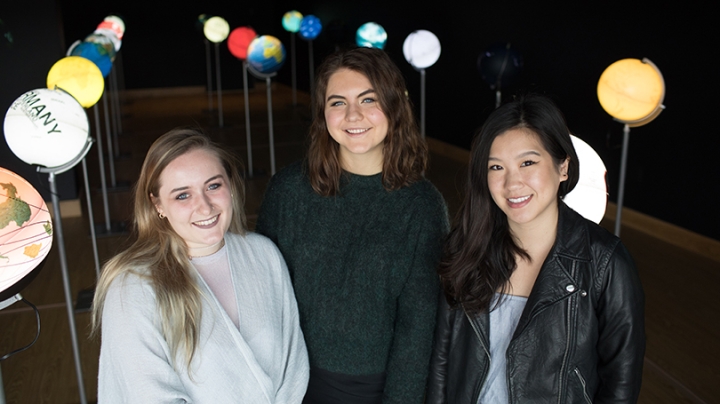 The Hood Museum of Art may be closed for expansion and renovation, but this year’s group of Hood interns are still being immersed in how an academic museum works, say Madeline Thompson ’17 and Alison Guh ’17, two of the five interns completing the program this spring.

The Hood’s internship program has long been the signature opportunity for undergraduates interested in hands-on experience in the workings of an academic museum. For a full year, the students gain curatorial skills, develop educational programming, and learn about public relations—and get to explore the collections to curate their own small “Space for Dialogue” exhibition.

This year has been a little different. With no physical exhibition space for students, and with the majority of the Hood’s 65,000 objects in storage off-site, the museum has partnered with the Digital Arts, Leadership, and Innovation (DALI) Lab to work with interns to develop Space for Dialogue Projects in virtual space, on the web.

The idea came out of a conversation between DALI Executive Director Lorie Loeb and John Stomberg, the Virginia Rice Kelsey 1961s Director of the Hood Museum, says Amelia Kahl, the associate curator of academic programming, who coordinates the intern program. The project was generously supported by a gift from Judy and Neil Smiley ’82.

“The interns are still using Hood objects as the primary focus of their exhibition, just as they would if they were working in the physical museum space, but instead of making curatorial decisions about a physical space, they’re making curatorial decisions about a virtual space—a website,” says Kahl. “So it opens up a range of possibilities for the art they can use.”

For example, for her virtual Space for Dialogue project, Thompson, an art history major and education minor from Winchester, Mass., is using a number of large public sculptures to illustrate her theme: balance.

“I am interested in how sculpture functions in a public space like a campus,” Thompson says, “so I’ve used this opportunity to present three public works that would not be possible to display in an actual Space for Dialogue in the museum”—including Richard Serra’s Two-Plate Prop in the Hopkins Center for the Arts; Ellsworth Kelly’s colorful Dartmouth Panels, installed on the side of the Hopkins Center facing the Black Family Visual Arts Center; and Joel Shapiro’s untitled bronze sculpture, which temporarily stands in the Maffei Arts Plaza. (It will be permanently installed in the front of the Hood when the museum reopens.)

“It has been exciting to feel so open and free to explore what we want,” says Thompson, “Everybody’s learning from this, and it’s such an experiment, so there’s a lot of freedom, and the staff are supporting us in whatever we want to do, and taking a big leap with the DALI Lab and the digital aspect of it.”

Guh, a double major in art history and psychology, says she appreciates how a virtual exhibition can create a rich experience for viewers. Her project focuses on how the self translates into artists’ work, including a painting by French artist Yves Klein called Blue Monochrome Sponge Relief (RE24).

“He uses sponges and this specific shade of blue called Klein International Blue—this vibrant bright electric blue that he actually copyrighted,” Guh says. Visitors to her site will be able to click on parts of the painting to learn about Klein’s use of color and texture. “A digital exhibition opens up these new avenues for experimenting with education and guiding viewers’ experience through the narrative of the exhibition.”

For Singer Horse Capture ’17, the opportunity to create a virtual Space for Dialogue project is a chance to extend research she began two years ago as a Native American special projects intern at the Hood. Though not an official Hood intern this year, the anthropology major and Native American studies minor from Minneapolis, Minn., says she was excited when the museum staff asked her to broaden the scope of her earlier work into a website.

Horse Capture’s project focuses on a single object in the Native American collection—a Yankton Sioux “winter count” that uses symbolic glyphs to record the years 1823 to 1917 in the tribe’s history. Working with an expert from the community in which the Hood’s winter count originated, Horse Capture is creating a bilingual website in the tribe’s language and in English to interpret the stories represented by each symbol.

“At first I was a little bummed that I wouldn’t have the opportunity to curate a physical exhibit, but the website is something that a lot more people are going to have access to,” says Horse Capture, who is a member of the A’aninin tribe of Montana. “For me the most important thing is to make this information available for people from the community where the object came from.”

Most of the interns began the project with little experience in programming or web design, but big ideas for what they wanted their sites to accomplish, says Loeb. “It’s a trade-off between customizability and ease of use. We didn’t want the students to be struggling with the software instead of struggling with concepts.” Loeb and the staff of DALI worked with the students to find a flexible platform—Square Space—and build out custom features as needed.

Staff at both the Hood and DALI have been gratified by the students’ accomplishments. “This is one of the best user experience design projects we’ve got going in the lab,” Loeb says. “It’s giving these students an opportunity that is exciting.”

“I’m learning so much about this field that is relevant for all curators—working with new media and the web,” says Guh. “I am interested in accessibility and in making art widely available, and I think this is one excellent way of doing that.”

Unlike a physical exhibition that comes down after a month or two, the virtual Space for Dialogue projects will be a lasting testament to the students’ experience. “As I’m applying to jobs and thinking about a future in museum work, it’s a fantastic product that I am very proud of,” says Thompson.

Though the renovated museum will include a physical Space for Dialogue gallery, Kahl says the museum may continue to include a virtual option for the interns.

“This year is sort of a test. We’ll have to decide whether we want to continue this in parallel with the physical Space for Dialogue,” Kahl says. “We’ll be checking in with the interns at the end of the program to see what their experience was like and if they felt it was worthwhile.”

For Guh, Thompson, and Horse Capture, the answer is a resounding yes. “I don’t think that there would be any better time to be working for the Hood,” Guh says.

The Hood interns will be presenting their virtual Space for Dialogue projects at 3:30 p.m. on Monday, May 22, in 13 Carpenter Hall. The event is free and open to the public. 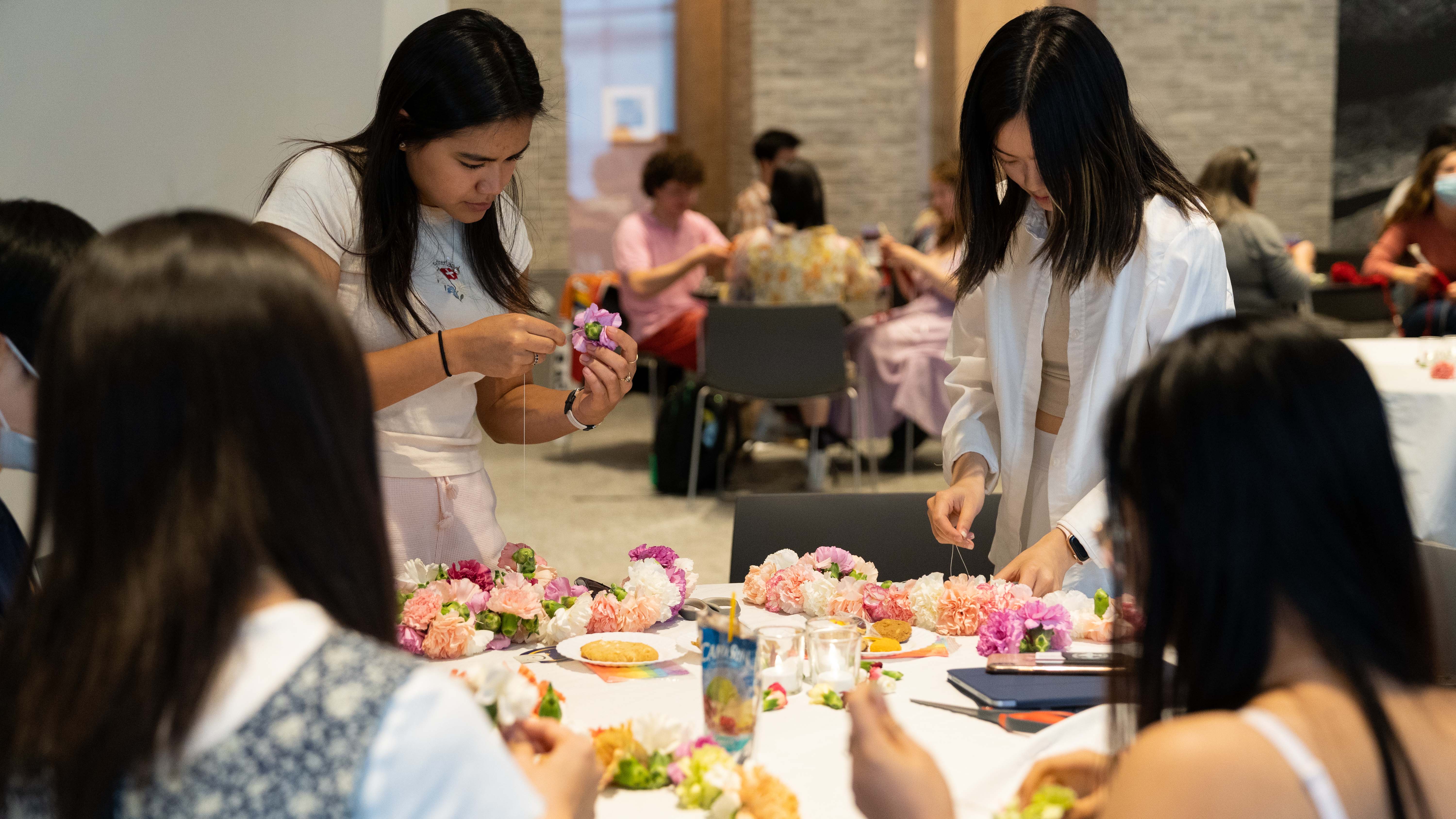 Capturing the Eyes of the Beholder 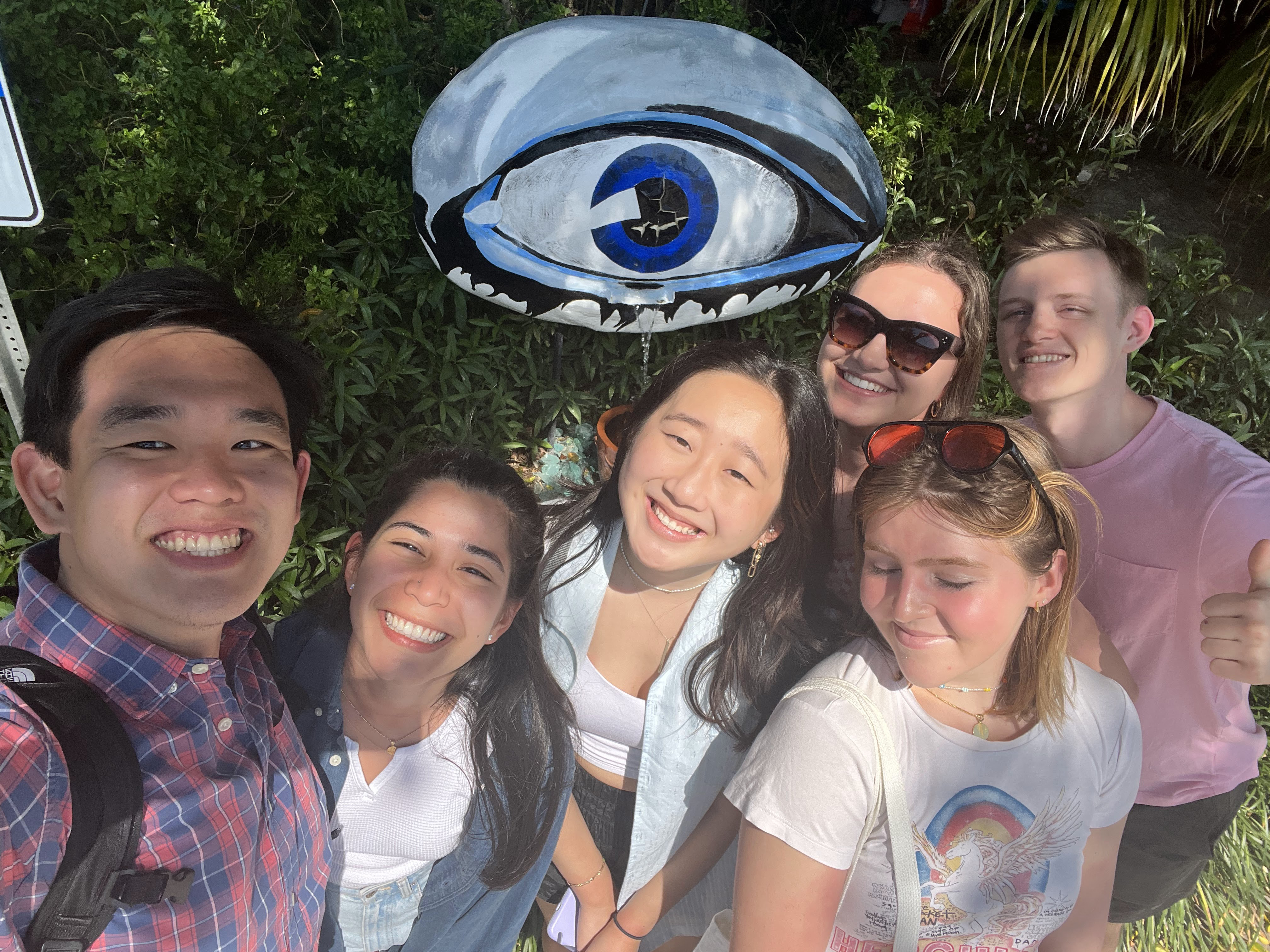