“Don really thinks everybody can be a musician,” says trumpeter Sophia Kinne ’20. 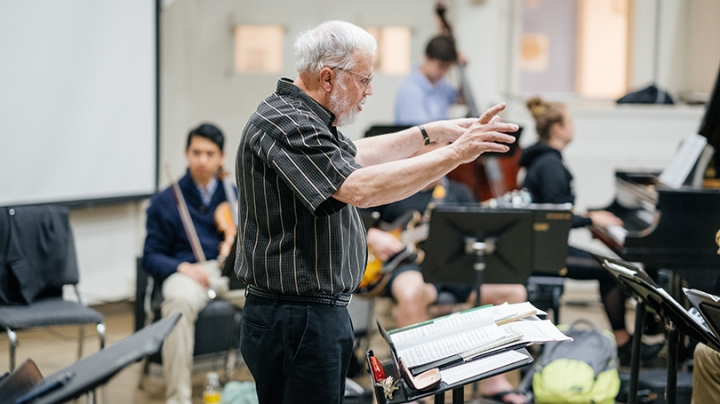 The mood will be bittersweet when the all-student Barbary Coast Jazz Ensemble takes the stage at the Hopkins Center for the Arts on May 13. Seven seniors will perform for the final time as Dartmouth students, and each will choose a favorite piece to play. And this year, they’ll be saying goodbye to their director. Don Glasgo, a highly respected valve trombonist, composer, and teacher who has written over 100 jazz compositions and arrangements, is retiring after 40 years leading the ensemble.

Some of the musicians gathered recently for a pre-rehearsal dinner at the Hop café and talked about how much they have enjoyed being steeped in African-American, Afro-Caribbean, and New Orleans jazz traditions—genres they might not otherwise have learned about in northern New England.

“What Don has taught us, more than anything else, is that jazz is an aural art form,” said saxophonist Erin Huffer ’17. “We listen to music a lot, and we replicate what we hear with our voices. He loves to have us learn everything by ear.”

Huffer says even though she’s not planning to make a career in music, her time with Barbary Coast has trained her ear and shaped her tastes. “I’ll be in Washington, D.C., next year, and I know I will go out and find jazz to listen to,” she says.

“Don really thinks everybody can be a musician,” says trumpeter Sophia Kinne ’20. “You don’t have to be a famous band leader to appreciate and learn jazz, and that shows up in the variety of music he has us play.”

First-year students say Barbary Coast has been a great way to find a niche at Dartmouth. When trumpeter Nick Samel ’20 arrived on campus last fall, he says, “Don made the Coast open to me, and he was just very welcoming.”

Students also praise Glasgo for making them better, more versatile performers. “What Don’s extremely good at is introducing a kind of music that many of us have never heard before—an avant-garde Latin style, for example—and making us cohesive on it. He takes us from a group that has never heard this stuff before to one that can play through it pretty well,” says Dillon Ford ’20, who plays baritone and bass saxophones. 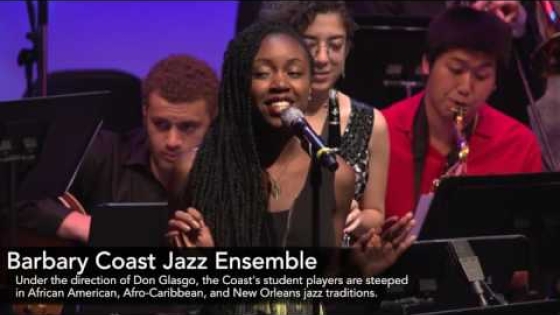 Glasgo’s love for Latin music took flight last spring when he led the Barbary Coast on a trip to Cuba, coinciding with President Obama’s historic visit to the island nation. (The group was featured in an NBC News story.) Tenor saxophonist Ziqi Wang ’18 says Glasgo prepared the ensemble well for an unforgettable experience. “The entire term beforehand we focused on Latin music, so when we got there, we were able to actually play with other people, seeing their culture and how music fits into it. Very cool.”

Wang says one of Glasgo’s most valuable gifts to Dartmouth has been the roster of talented guests he has brought to the Hopkins Center stage over the years. Alto sax player Gray Christie ’20 agrees. “He is so legit within the jazz community he is able to attract all these cutting-edge musicians, like Carlos Henriquez, the bassist for Jazz at Lincoln Center.”

Another stellar guest, Joe Bowie, performed with the Barbary Coast in February. Following a master class he gave with Glasgo, Bowie praised his friend and fellow jazzman. “I visit schools and conservatories all over the world,” Bowie said, “and Don has created a college program that is unequaled. It’s one of the most eclectic jazz ensembles in the country.” Bowie has known Glasgo for over 20 years. “Don has done some great arrangements for my big band, and he has shown me a lot about good teaching, about encouraging young musicians, even when they are still in high school.”

Glasgo returned the compliment. “When I think of Joe, I think of strength and determination—the strength that it takes to be a jazz musician, a leader instead of a side man. Jazz musicians are leaders, and the most creative people I know.”

Glasgo says he tries to instill those qualities, creativity and leadership, in every musician he mentors. “My job has been to teach students to improvise, in every sense of the word.”

But now, he says, he’s ready to step aside, and make way for new leadership.

“Forty years is a long time. We were able to do a tour to Cuba this past March, and it’s never going to get better than that—it doesn’t make sense to go for 42 or 44 or whatever,” he says. It’s time, he says, to turn over the ensemble to someone who he hopes will “continue the vision I have had about bringing in a wide diversity of people to work with the group.”

Glasgo says he and his wife are looking forward to more family time and travel, now that his schedule is freeing up.

Glasgo’s final concert with the Barbary Coast takes place at 8 p.m. May 13 in Spaulding Auditorium at the Hopkins Center for the Arts.

With a national search underway, the Hop hopes to name a new director by the end of spring term.