Salas has led the energy institute in an interim capacity since May. 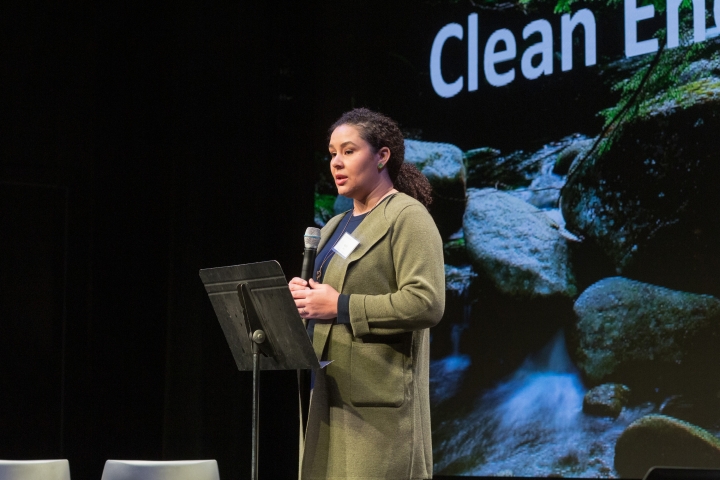 After leading the Arthur L. Irving Institute for Energy and Society in an interim capacity since May, April Salas has been appointed the institute’s executive director, Provost David Kotz ’86 has announced.

“April’s passion for the Irving Institute’s mission is creating a vibrant and collaborative center of excellence in the heart of the West End. She is playing a critical role in galvanizing expertise on energy and sustainability and engaging faculty, student, and staff participation from all corners of campus on these issues,” says Kotz.

Under Salas’ leadership, the Irving Institute is creating strategic interdisciplinary research hubs around areas of critical impact on climate, energy, and society and has launched a faculty affiliates program that is building research networks across campus. Earlier this month, the institute convened a symposium that brought together more than 100 members of the faculty during Dartmouth Energy Week.

“We’re just scratching the surface, connecting the dots on research that is revealing the full impact of a changing climate and an energy transition,” Salas says. “What inspires me is the breadth and depth of interest and expertise that is present within the Dartmouth community around energy, climate, health, and society. We’re creating opportunities for dialogue across disciplines that don’t necessarily know about each other’s work.”

The Irving Institute was created in 2016 to advance an affordable, sustainable, and reliable energy future for the benefit of society. Among its initiatives to date, the institute—which moved into its 55,000-square-foot home in the West End of campus in March—has launched numerous curricular and co-curricular initiatives for students, including a new foreign study program in the Baltics, sponsored by Irving and the government and Russian language departments, scheduled for summer 2023. The institute has also awarded substantial research funding to faculty and students and established partnerships at Dartmouth and around the world.

Salas came to Dartmouth in 2016 to serve as the founding executive director of the Revers Center for Energy, Sustainability, and Innovation at the Tuck School of Business, now one of the most engaged business school energy centers in the world. She has continued to lead the Revers Center as Irving’s interim executive director and will maintain her support for the center in a part-time capacity as Tuck recruits her replacement.

What inspires me is the breadth and depth of interest and expertise that is present within the Dartmouth community around energy, climate, health, and society.

During the Obama administration, Salas directed the White House Quadrennial Energy Review Task Force Secretariat and held senior roles at the U.S. Department of Energy, including as director of the State Energy Assurance Program and chief of planning and analysis for federal energy emergency response. She began her career in energy finance, consulting on projects across Africa, Europe, and Latin America, and held several roles at UNESCO and the Africa desk of the United Nations Headquarters’ Department of Peacekeeping Operations.

Locally, Salas serves as the inaugural chief sustainability officer for the town of Hanover, is a member of the Hubbard Brook Research Foundation’s board of trustees, and was the founding chair of the Community Power Coalition of New Hampshire. She has served on the boards of several nonprofits, public and private companies, and growth-stage startups, including 3Degrees, Clean Energy New Hampshire, and Available Power.

Salas earned her bachelor’s degree from the College of William and Mary and her MBA from Cornell University. She holds a master’s degree in international affairs, conflict resolution, and civil society development from the American University in Paris; and in international security and economics with a focus on energy poverty and development from L’Institut Catholique de Paris.

Of what Irving has planned for the coming year, Salas says, “Be on the lookout for some cool things that we will be launching out of the strategic research hubs. And we’re cooking up partnerships with the Magnuson Center for Entrepreneurship and others. There’s a lot of collaboration to be had just by virtue of being in this innovation district in the West End.”

Most importantly, the institute will be focused on engagement, hosting a series of community open houses and working to support student programs and other academic initiatives across Dartmouth.

“We want to hear from everyone,” she says.