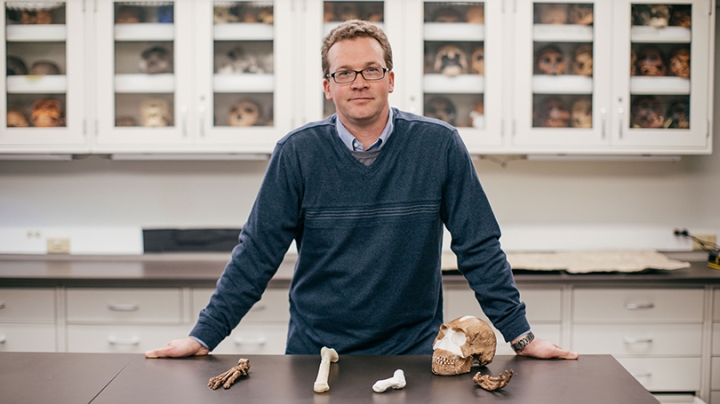 Associate Professor Jeremy DeSilva describes the new discovery of a skeleton of a single individual with a skull as “absolutely gorgeous, with all 32 teeth present.” (Photo by Robert Gill)
5/09/2017
Body

Dartmouth paleoanthropologist Jeremy DeSilva is once again part of a fossil discovery that is shaping scientists’ understanding of human evolution.

The new fossils are from Homo naledi, an early hominin species first reported in 2015 by a team that included DeSilva, an associate professor in the Department of Anthropology, in an unprecedented discovery of more than 1,600 fossils of a new human ancestor.

DeSilva is the coauthor of one of three scientific papers about the new fossil find, published today in the journal eLife. This latest research answers questions about the age of the fossils and their place in human history.

In his paper, DeSilva describes the anatomy of specimens found in an almost inaccessible area, known as the Lesedi Chamber, in the South African cave where the original fossils were unearthed. (H. naledi is named for the first site, the Dinaledi Chamber.)

Another of the papers analyzes the date of the specimens, involving a technique called “electron spin resonance,” which measured electron loss in tooth enamel from teeth of the Dinaledi fossils. “The real shocker was the age, at about 250,000 years, for Dinaledi—a tenth of the age I expected. I would have guessed 2 million years,” says DeSilva.

“What this means to the big picture of human evolution, is that you have a species hanging around at the same time as our immediate predecessors,” he says. “You have the persistence of a small-brained hominin that has many primitive aspects of its anatomy that would have shared the landscape with late Homo erectus and perhaps even early Homo sapiens.”

Dartmouth anthropology students shared in the excitement of the first fossil find this past winter when they traveled to South Africa with DeSilva and Professor of Anthropology Nathaniel Dominy. As they excavated fragments of another early human ancestor, Australopithecus sediba at the neighboring site of Malapa, several students came upon fossil remains.

“This was something I will definitely remember forever,” says Julia Cohen ’18. “The fact that we found a fossil is amazing and it was incredibly exciting. There aren’t that many fossils out there, so even the small pieces, like teeth, tell you a lot.”

The Lesedi Chamber in the latest discovery has not yet been dated, but DeSilva suspects it and the fossils it contains were contemporary with Dinaledi. “There is no reason to think this is a different creature,” he says. “The teeth are the same, the skull shape is the same, but it is a little bigger. We think it is a slightly bigger individual. The legs are very similar to the Dinaledi legs, though we don’t have a very nice femur like this in the Dinaledi Chamber.”

The new fossils, less fragmentary than those from the earlier trove, tell a more detailed story than the earlier find. The remains represent at least three individuals, including the bones of a very small child—a pelvis and some teeth—and a lower jaw from a second individual.

DeSilva describes the discovery of a skeleton of a single individual with a skull as “absolutely gorgeous, with all 32 teeth present. None of the Dinaledi skulls were this nice. It showed the brain size was 610 cubic centimeters, which is very small.”

The skeleton also included parts of the arm, the vertebral column, some ribs, and the legs, but no feet. The leg bones were among the first items recovered from the chamber—items of particular interest to DeSilva, who is an expert in legs, feet, and locomotion.

DeSilva says that naledi’s long legs indicate that it would have had a decent stride, but its small joints suggest it wouldn’t have had endurance over long distances.

“The leg bones are very long, relative to their joint size, and this is an interesting combination. These are not just small, scaled-down modern humans, but represent completely different anatomies,” he says. “In Homo erectus, we already see long legs and big joints, but in the earlier Australopithecus, we had short legs and small joints. Naledi is showing us a different combination of long legs and small joints—something we hadn’t seen before. And we are not sure what to make of it.

“The flexibility of the human form is apparent in this unique combination of anatomies,” DeSilva says. “Now we have to figure out how this combination was beneficial to the survival of this particular creature. It is telling us about a lineage that goes back far and persisted right up until pretty recently.”