The students competed in the National Post-Secondary Russian Essay Contest. 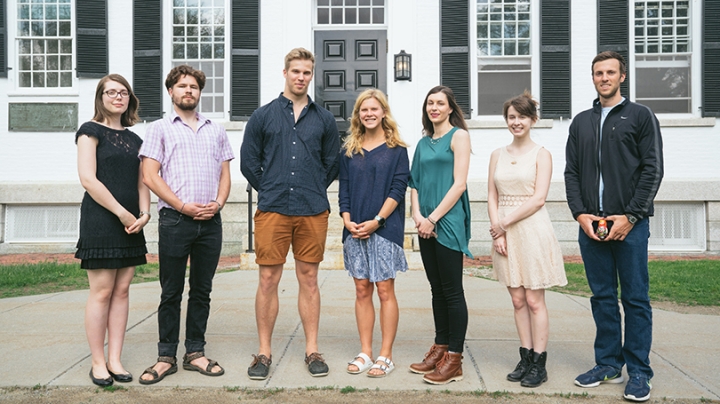 On an afternoon in February, in a classroom in Reed Hall, 10 students sat down to write an essay for the 18th annual National Post-Secondary Russian Essay Contest, sponsored by the American Council of Teachers of Russian (ACTR)—joining more than 1,300 other undergraduate essay-writers from 67 schools nationwide.

Alfia Rakova, a research assistant professor and director of the Russian department’s language program, opened an envelope to reveal this year’s topic: “An Important Person in My Life / Важный человек в моей жизни.” The students had an hour to write. “No dictionaries, nothing, just black or blue pen,” says Rakova.

Dartmouth’s Russian department is small, with about two-dozen students in first-, second-, and third-year language classes combined. But the program’s rigor and Rakova’s enthusiasm for pushing her students to succeed paid off: Seven out of the 10 contestants won prizes or honorable mention—the largest number of Dartmouth awardees since Rakova’s students began participating in the competition in 2014.

At a reception last week for the winners, Rakova presented each student with a framed certificate from the ACTR, as well as matryoshki, traditional Russian nesting dolls that Rakova ordered specially for the occasion.

Amanda Durfee ’19, a history major specializing in U.S.-Russian foreign relations, took a bronze prize for second-year non-native speakers. She participated in the contest to test her language skills, “to see how I could not just be able to write an essay but communicate an idea beyond the bounds of a classroom experience.”

Durfee says she wrote about a high school teacher who changed her life by encouraging her to study public speaking. “She’s been a really important figure in my life. I felt self-conscious about expressing deep and emotionally invested thoughts in Russian, and how simplistic I probably was coming across. But at the same time I felt strongly enough about it that I was able to try to overcome that.”

Allyssa Austin ’19, a double major in Russian and government, received honorable mention in the same category. Austin, who served six years as a linguist in the Navy before coming to Dartmouth, wrote her essay about her mother’s death. “The fact that I won any sort of recognition for my essay made me feel very proud,” she says.

Writing about something so personal in a new language “made me take a step back from the incident,” she says. “I focused a lot on how exactly do I get my thoughts to come across in Russian, so a lot of it was just the mental labor of, ‘I want to say this, but I don’t really know how to say it like this, so I’ll try to work my way around it.’ ”

Matus Petrovsky ’19, from Bratislava, Slovakia, earned gold in his category, second-year non-Russian Slavic speakers. “I’m only a second-year Russian student, so I don’t have a vocabulary that’s very big, but I tried to write a metaphorical essay about multiple people who represent the same figure in my life,” he says.

Studying Russian at Dartmouth helps Petrovsky feel closer to his culture while he’s far from home. “And I really love the professors in the department,” he says. “It’s a very close-knit community, and I really enjoy the classes.” Another non-Russian Slavic speaker, Luka Pejanovic ’17, received honorable mention.

“I was very surprised but then very proud of all of us, because we’ve been taking classes together now for several terms, and it was really cool to see how much success there was,” says Maria Jarostchuk ’17, an environmental studies major and Russian minor from Acton, Mass. “I think that’s very indicative of Dartmouth’s Russian department.”

Jarostchuk competed as a heritage speaker—her grandparents emigrated from Russia during World War II, and she grew up speaking “Runglish” with her siblings, she says. She received a silver award at the second-year level.

Of her decision to study Russian at Dartmouth, she says, “I wanted to be able to speak completely in Russian with my grandparents. I’ve had Professor Rakova for four terms and she’s just a phenomenal professor. She puts so much time and care into every single class, and you don’t even realize how much you’re learning. And then I’ll go back and visit my grandparents and be speaking with them about politics, religion, philosophy—all these things that I never thought I could say in Russian.”

Ksenia Ryzhova ’17, from Tomsk, Russia, and Timothy Messen ’18, from Houston, Texas, also competed as native Russian speakers, both earning gold, Messen for third-year Russian, and Ryzhova for fourth year. Both work as drill instructors for the Russian department.

“I have been trying to work on creative writing in different languages, not only English but also Russian and French and German, and this was an opportunity to try out another form,” says Messen.

“And it’s hard to say no to Professor Rakova,” says Ryzhova.

Proud as Rakova is of all her students, she will not let them rest on their laurels. Earlier this month she handed the contestants copies of their entries, with grammar and spelling errors circled in red ink. “Maybe next year you’ll be competing again,” she says.