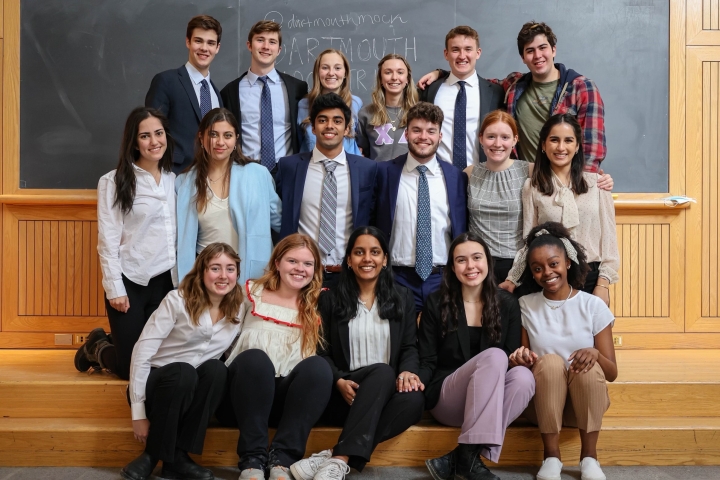 The Mock Trial Society has had quite a year.

Each year, mock trial teams from around the country compete in simulated trials. Students act as attorneys and witnesses, arguing both sides of a fictitious court case throughout the season. This year’s case concerned aggravated arson.

And for the second year running, the society’s two teams qualified for the Opening Round Championship Series. Dylan Griffith ’25, Archita Harathi ’22, and Olivia Rateau ’24 each won awards at the championship, which was held in Chicago over spring break.

Currently, Dartmouth is one of just two Ivies—the other is Yale—to have multiple mock trial teams ranked in the top 100 nationally, says Tekriwal, who with Vice President and President-Elect Annmarie Allos co-captained one of the teams.

After finishing what Tekriwal describes as Dartmouth Mock Trial Society’s most successful year yet, the team is now looking eagerly toward the future.

“We’re excited to welcome a new class of ’26s and continue to build the Dartmouth Mock Trial program.”

“Morrow has contributed extensively to the medical school curriculum in primary care venues and continues to serve as a passionate advocate for the role of primary care within and without the academic health system,” the academy wrote in the announcement.

Six Dartmouth students have been recognized for their entries in the American Council of Teachers of Russian 2022 National Post-Secondary Russian Essay Contest. The winners were chosen from 973 essays submitted from 58 colleges and universities across the country under very unusual circumstances.

In the award announcement, ACTR wrote, “A huge thank-you goes to this year’s judges, who, despite having fled Russia shortly after the invasion of Ukraine, heroically stepped in on short notice to read and rank all of the essays.”

Research Assistant Professor Alfia Rakova, director of the language program in the Department of Russian wrote, “Their topic this year was ‘Home,’ and you can only imagine how tough it is for our students from Ukraine.”

The winners in the category of “students who do not and did not ever speak Russian or any other Slavic language at home, in the community, or study it prior to college,” were: Ellie Brown ’25, Bronze; Alexander Azar ’25 and Alexander Joel ’25, Honorable Mention.

The winner in the category of “native or heritage speakers of a Slavic language other than Russian and of languages of the former Soviet Union who might have had minimal prior experience with Russian” was: Nathan Syvash ’25, a native speaker of Ukrainian, Gold.

The winners in the category of “heritage speakers of Russian and students from the former Soviet Union with more than minimal prior language experience” were: Zhenia Dubrova ’24, Gold; and Marta Hulievska ’25, Silver, both from Ukraine.

Chukwuka Odigbo ’25 has been selected to attend the Expanding Diversity in Economics Summer Institute hosted by the Becker Friedman Institute for Economics at the University of Chicago. The summer institute is designed for talented undergraduate students from a broad range of backgrounds who are interested in economics.

Odigbo grew up in Nsukka, Nigeria, and is interested in applying computing to solving problems in the economies of developing countries, according to the Friedman Institute announcement.

Daniel Lam ’22 was selected as a 2022 White House Correspondents Association Scholar and attended the annual WHCA dinner in Washington on April 30. Lam, who will work as an NBC News Summer Fellow, also attended a White House news briefing.

Kudos is an occasional column that recognizes Dartmouth faculty, students, and staff who have received awards or other honors. Did you or a colleague recently receive an award or honor?
Please tell us about it: dartmouth.news@dartmouth.edu.