An Experiential Journey to the Heart of Mississippi

A Tuck student led a group of classmates and faculty deep into the South. 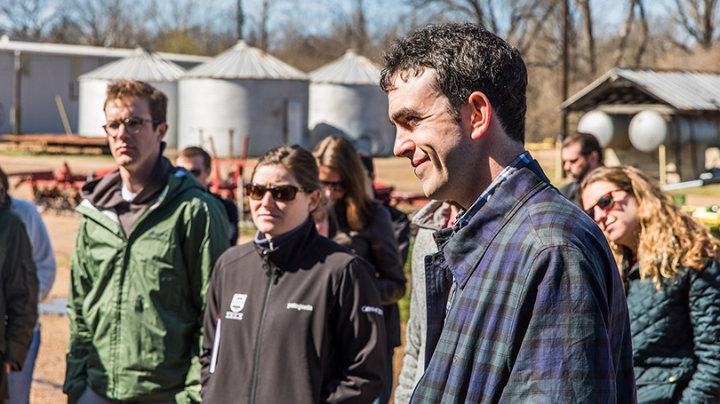 Read the full story by Jeff Moag, published by the Tuck School of Business.

Tom Allin, Tuck ’17, didn’t realize how much a part of him Mississippi was until he left home. As one of the few (if not the only) Mississippians in his class at the University of North Carolina, he became a proud and popular ambassador of his home state. He fielded frequent questions about the state, and whatever form they took their substance followed a common theme: What is wrong with Mississippi?

Over time, Allin began to ask himself a related question: What can I do to help?

He wrote his senior thesis at UNC on the experiences of Mississippi expatriates and after graduation returned to the state with Teach for America (TFA). He worked in the Delta, a swath of northwestern Mississippi best known for its economic challenges and a form of musical lament called the blues. Allin, who is white, ran a school drama program focused on black history for public school students who were almost all African American and came from underprivileged backgrounds.

At Tuck, Allin began laying the groundwork for what would become the Mississippi Global Insight Expedition (GIX) before his first-year classes even started.

The turning point came in a conversation with Tuck professors Emily J. Blanchard, who specializes in global economics, and Andrew A. King, who teaches strategy.

Recalls King, “Tom walked into my office and said ‘I think we should run a trip to Mississippi. It’s got a distinctive economy and it's a distinctive region of the United States and it could be a valuable experience for students.’”

Allin and the professors designed the course to shed light on how regional economic development relates to an area’s unique history, geography, resources, and institutions. That the Mississippi GIX took place in the U.S. heartland is particularly meaningful. While we often think about economic development on a national level, enormous variation exists within countries. In the United States, Mississippi is often held up as an example of social and economic under-performance.