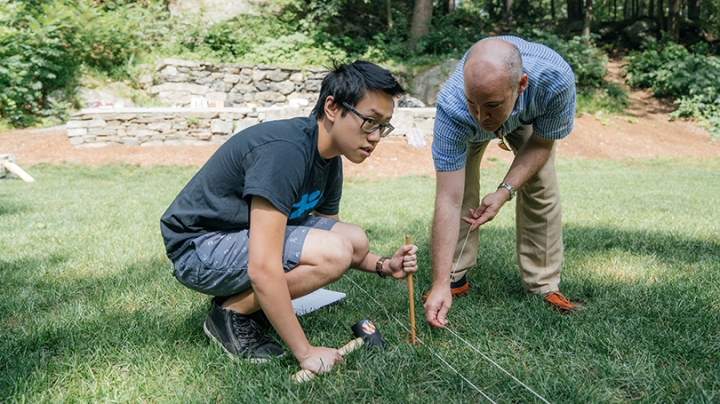 Assistant Professor of Art History Nicola Camerlenghi, right, and Jian Dong ’19 mark the dimensions of a 13th-century church on the Bema as part of a humanities lab for “Art History 34: Castles, Cloisters and Cathedrals.” (Photo by Eli Burakian ’00)
8/28/2017
Body

On a sunny day toward the end of summer term, about a dozen students from Assistant Professor Nicola Camerlenghi’s “Art History 34: Castles, Cloisters and Cathedrals” class meet on the Bema. Their goal: Lay out the footprint of a 13th-century French gothic church using only technology that would have been available to builders in the Middle Ages.

Joining them for the day as “master mason” is Michael Davis, a professor of art history at Mt. Holyoke College and an expert on gothic architecture. “We’re going to try to get into a medieval mindset,” Davis tells the class, passing out plans for the Basilica of Saint Urban of Troyes, which Pope Urban IV commissioned in 1262 and whose floor plan the class will attempt to replicate within two hours.

“What I want to impress upon you is that this is experimental,” Davis says. “I have worked out a certain sequence of steps, but if the light bulb goes on and you see a more efficient way to accomplish the same thing, please put your innovation into practice.”

For tools, the students use string, wooden stakes, makeshift compasses, mallets, and basic geometry to measure angles and distances, beginning by marking out an 18-foot-by-18-foot square for the church’s central crossing—a half-scale rendering of the actual basilica’s crossing, which is 36 by 36 feet.

“Any symbolic bells going off there?” Davis asks. For the church’s designers, he explains, the number 6—the square root of 36—is an example of a “perfect number,” because its factors (3, 2, and 1) add up to the number itself. “Don’t you feel the hair on the back of your neck starting to kind of rise?”

Pope Urban himself may have had some input in the dimensions of the crossing, Davis says. “This is one place I can imagine that the Pope would have said, ‘I want a perfect building.’”

“They were trying to connect themselves to heaven, to build a kind of heaven on Earth,” says Camerlenghi. “So how do you do that? Well, you try to replicate the perfection of the cosmos, using geometry as a guiding principle.”

The students break into groups, working to extend the strings and stakes of the floor plan out from its center, rectangle by rectangle, oriented east to west. Camerlenghi says artwork of the time shows medieval builders staking out structures in a similar manner. “We have images of them doing this,” he says. “There’s one of an abbot, rope everywhere. What’s going on there? Well, he’s describing how Peter and Paul told him how to lay out a church—you know, in a dream.”

Jules Wheaton ’19, a government and art history double major from Santa Fe, N.M., says the project is helping her appreciate how the church’s geometry reflects the religious and political beliefs of its time. “I like thinking about the concepts that religion wants to promote and how those relate to political theory—how a physical structure like a church can kind of propagate those ideas,” she says. “We’re thinking about things like the proportion of the side aisle to the nave and what that means, because certain people would be in the nave as opposed to the aisle because of their status. Those sorts of things physically manifest themselves in the building.”

The project is supported by a new course-development grant from the Leslie Center for the Humanities for humanities labs—courses that “move beyond the traditional classroom experience typically associated with the humanities to involve some combination of experimentation, observation, hands-on learning, creating new knowledge, public dissemination of that knowledge, and creative production,” according to the center’s website. “Art History 34” is the first class to be taught as an official humanities lab.

On the Bema, Bill Kosmidis ’19, a government major from Glenview, Ill., pauses to sample some Lou’s pastries brought in to feed the crew. “It’s been a lot more difficult than we thought it would be,” he says, pointing out that some of his group’s strings are visibly shy of perpendicular. But the effort has been valuable, he says. “In class we’ve been talking about the structures and forms and styles of all these architectural buildings, but it’s one thing to just talk about them in class and totally another thing to be creating them in a real physical space.”

Leah Tan ’19, an economics major from Braintree, Mass., will be in Milan this fall on an exchange program. “I wanted to learn a little bit more about some of the architecture I might see in Italy,” she says. “I couldn’t really imagine how they built all those great buildings without the tools that we have today. This exercise makes me more aware of some of their methods and how precise they had to be in order to make buildings that still are standing.”

A half-scale footprint of the 13th-century Basilica of Saint Urban of Troyes takes shape on the Bema during a humanities lab for Assistant Professor Nicola Camerlenghi’s class. (Photo by Eli Burakian ’00)

Camerlenghi says he hopes students take away an understanding “that there are many ways to make a building like this—many ways to derive these measurements that create the geometry. It is a creative process. And in those little decisions are probably the secrets of the church that make the difference between one building working perfectly versus some that are a little crooked—which many of them are.”

“I was really skeptical that we were going to be able to pull it off, to be honest,” says Pilar Flournoy ’19, a biomedical engineering major and art history minor from Malibu, Calif. “When we talked about it in class, I was like, there’s no way we’re going to be able to do this in two hours. But the way it was planned out was really great, so we could actually see what’s going on. It took a lot of teamwork, but it worked out.”

Camerlenghi says the grant “gave me the courage to think big. I had done this on a much smaller scale before, but now I can pay an honorarium to bring in an expert and buy materials.”

Humanities labs, he says, help students “tap into different sorts of understanding and memory. They’re solving problems as opposed to having answers poured into them. It’s far more active and engaging, and there’s no reason that that mentality that we usually associate with the sciences can’t happen in a lab in the humanities.”

And the weather doesn’t hurt, Wheaton says. “It’s so nice to be outside. Especially in week nine, it feels good to be like, I have a fun class today.”