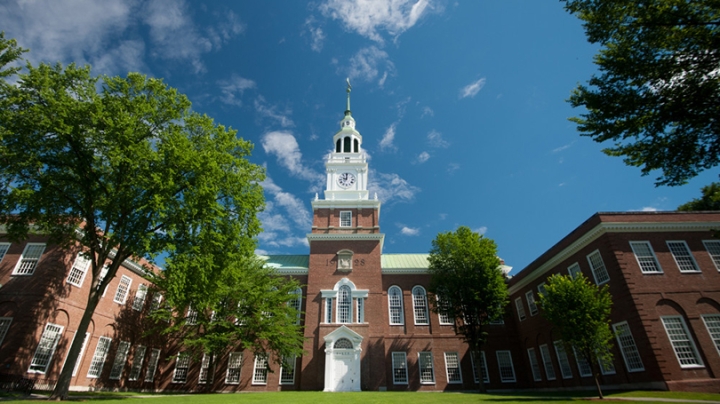 Alumni, parents, and friends offered powerful support of programs across Dartmouth in the fiscal year ending on June 30, 2017, making new gifts and commitments of $285.6 million—one of the highest totals in the school’s history.

Overall, commitments exceeded the College’s five-year average by nearly $60 million. Among the philanthropic highlights of the past year:

Alumni demonstrated their support through strong engagement with programs across the country and in Hanover, including record-setting attendance at reunions in June.

“The remarkable generosity and involvement of our alumni, parents, and friends create great momentum for Dartmouth’s distinctive educational model,” says President Phil Hanlon ’77. “On behalf of the trustees, faculty, students, and staff at Dartmouth, I want to thank everyone who contributed in the past year. Your investment in Dartmouth’s future affirms our liberal arts tradition, our focus on world-class scholars who love to teach, and our ambition to lead in key areas of scholarship for the betterment of humankind.”

Charitable support has surged since President Hanlon took office in June 2013, allowing key investments in people and programs across the institution. Commitments exceeded $1.17 billion during his first four years as president—compared to $516 million over the four years prior to his arrival—with donors establishing overall giving records in three of those years. Related to that success, Dartmouth was recently named the top college in the country on the Forbes 2017 Grateful Grads Index of alumni support.

The three professional schools have recorded significant philanthropic achievements during the past year. The Tuck School of Business raised a record $31.1 million overall, indicating strong enthusiasm for the school’s transformative values. Total giving to the Geisel School of Medicine was $15.4 million, with alumni participation and unrestricted giving both up from the previous year. And Thayer School of Engineering, with $10.4 million in total support, had a record-breaking number of leadership donors to its annual fund, which raised $1.5 million. In addition, nearly 300 alumni and friends have joined Thayer’s 150th Anniversary Giving Circle.

A Major Institute Is Created

Dartmouth announced the creation of the Arthur L. Irving Institute for Energy and Society to advance understanding of how energy resources power modern life and directly affect a society’s standard of living. A lead gift of $80 million was made to launch the institute by Irving Oil; the Arthur L. Irving Family Foundation; and Arthur L. Irving, his wife, Sandra Irving, and their daughter, Sarah Irving ’10, Tuck ’14. Alumni and friends contributed $33 million toward the total institute goal of $160 million.

“The institute represents everything that is great about Dartmouth: the ability to bring students and faculty together to find solutions, drive innovation, tread new paths—to always think big, create the leaders of tomorrow, and inspire the world,” Sarah Irving said at the institute’s announcement ceremony in September.

In June, the College announced the appointment of Elizabeth Wilson, a leading scholar of energy, technology, law, and business at the University of Minnesota’s Humphrey School of Public Affairs, to serve as the institute’s first director.

With a second $10 million gift in less than five years, former U.S. Rep. Frank J. Guarini ’46 doubled his commitment to advance international understanding through foreign study. The Frank J. Guarini Institute for International Education, which includes Dartmouth’s Off-Campus Programs office, provides opportunities for students to study in countries around the world and expand their expertise in language, diplomacy, and global issues.

“There is no better way to promote peace in our world than for young people to immerse themselves in different cultures, getting to know new people and expanding their worldview firsthand,” says Guarini.

Donors established seven endowed professorships. These endowed funds will permanently support scholar-teachers at the height of their academic careers, providing them with resources to pursue innovative research and curricular design.

The physical contours of the reimagined Hood Museum of Art have begun taking shape in the past year. Through the end of June, Dartmouth had received $40.6 million toward the $50 million goal for the project. When the museum reopens in 2019, it will be a more dynamic teaching museum—50 percent larger, featuring five new galleries, three times more object-study space for students, and a striking new entrance that will serve as a vibrant social hub for the community.

The new Moosilauke Ravine Lodge is on track to open in October. The project has been fueled by a matching gift challenge from George “Skip” Battle ’66 and his children, Daniel ’01 and Emily ’05, and from alumni and friends, all of whom have given a total of $10.7 million toward the construction project.

Established by a small group of alumnae three years ago, the Centennial Circle of Dartmouth Alumnae is setting a national standard for philanthropy in higher education, led by women. Circle members in April announced an ambitious goal of funding 250 annual scholarships by 2019, Dartmouth’s 250th anniversary.

The newly established Dartmouth Founders Project melds entrepreneurism and philanthropy, with the College assisting alumni in their efforts to establish new ventures, and these entrepreneurs pledging to support the College as their businesses grow. The annual E-Forum in San Francisco in September brought together more than 400 West Coast alumni working in all stages of business creation.

Forty-five percent of undergraduates received financial aid during the past year, with nearly half of all scholarship support coming from donors to the Dartmouth College Fund. The fund received a total of $43.8 million in gifts during the past year, with more than 85 percent of the total directed to financial aid. The average financial award for a first-year student was $47,833. The number of alumni making a gift to the fund, 39.5 percent of all alumni, was down slightly from the previous year, and second among Ivy League schools.

Barbara and Ed Haldeman ’70, longtime leaders in the Dartmouth community, and their three children endowed the athletic director’s position. The $5 million gift to create the Haldeman Family Director of Athletics and Recreation has expanded the director’s ability to invest in programs and innovations that boost Dartmouth’s competitive advantage and enhance the student-athlete experience. During the past three years, the College has received gifts totaling more than $24 million to endow a dozen positions in the Department of Athletics and Recreation.

Dartmouth’s six house communities marked their first year of operation, with philanthropy supporting events, activities, and other programming. The house communities are creating a greater sense of continuity for students and providing them with additional ways to connect with a range of students who have different experiences and interests.

“The lifelong bond between Dartmouth and its alumni is deep and powerful,” says Catherine Craighead Briggs ’88, chair of the Dartmouth College Fund Committee and one of the founders of the Centennial Circle. “Alumni appreciate how Dartmouth shaped our character and put us on the path for success in life. Each of us knows we have been fortunate to attend the nation’s premier liberal arts college, and we’re committed to raising the College to even greater heights. You see it in the tremendous increase in giving during the past four years and in the reunion attendance numbers.”