The board chair speaks at town hall meeting about values she calls “distinctly Dartmouth.” 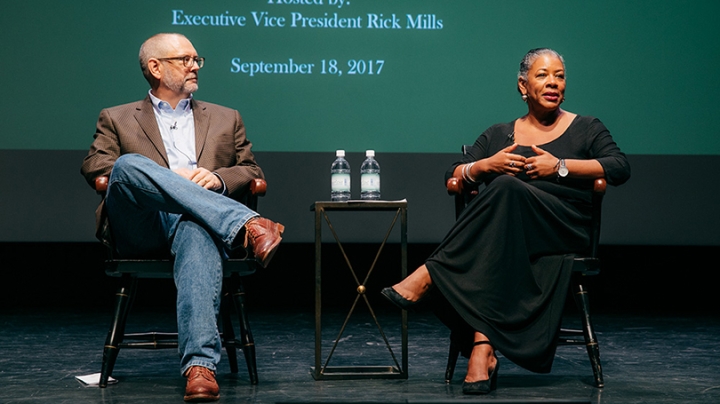 Laurel Richie ’81, chair of the Dartmouth Board of Trustees, spoke Monday at a community meeting about her deep commitment to Dartmouth’s academic mission, explaining what makes Dartmouth special—a vision that builds on the institution’s strengths.

More than 200 faculty, staff, and community members came to hear Richie, who took over as board chair in June, at a town hall meeting hosted by Executive Vice President Rick Mills in Spaulding Auditorium.

Richie recalled when she first saw Dartmouth, coming to Hanover from Shaker Heights, Ohio, where she grew up in the first African American family to integrate a traditionally white neighborhood of the Cleveland suburb.

“I have a very, very vivid memory of crossing the Connecticut River—it was a glorious day—going up the hill, getting to the Green and thinking, oh my God, if I imagined what a College should look and feel like, it was the Dartmouth Green and Dartmouth Row on the horizon with Baker Tower,” she said.

Richie majored in policy studies at Dartmouth “because it seemed to be the quintessential liberal arts major, allowing me to take the broadest range of classes. And, in my mind, it was the study of how people make decisions.” This training served her well when she was preparing for her first press conference as president of the Women’s National Basketball Association—a 5-foot 4-inch woman who had never played a game of basketball.

“I remember in that moment channeling Dartmouth. I remember saying to myself, I’ve really learned how to stand on my feet, and I can find my way through anything.”

When Richie was elected to the board in 2012, after three decades of work in marketing, management, and corporate governance, she thought the College could do a better job of communicating a consistent message to the world.

Working for several years with faculty, staff, alumni, and students as head of a new trustee communications committee, Richie led the articulation of a strategic framework that defines Dartmouth’s distinctive characteristics. She explained the five qualities at yesterday’s meeting:

In the question-and-answer period at the end of the meeting, several people said they recognized their Dartmouth in these core concepts, but asked how the College can communicate this to the outside world.

“We have to own it, and we have to be ambassadors of it. Quite frankly, it is all of us who live and breathe it who can bring meaning to it as well. It’s not about just giving people these five concepts, it’s talking about the experiences that we have,” Richie said. “I’m really optimistic because I think we know who we are, we have confidence, and we can be really proud of this special place.”