The seeds can be traced to an archaeological find on a Native American site. 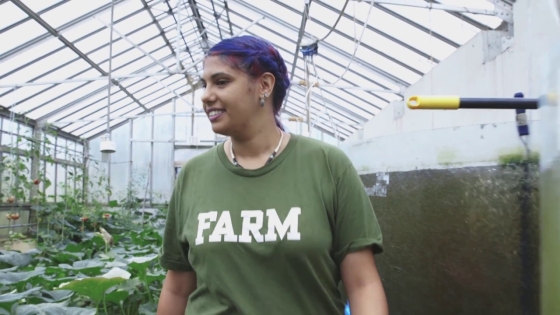 All summer long, at Dartmouth’s organic farm, Poli Sierra-Long ’19 has been nurturing what she thinks of as a miracle of nature. Happen upon her watering or weeding her huge, rainbow-colored squash nestled in a robust web of vines, and you’ll hear a remarkable story of botanical survival.

In 2008, Canadian archaeologists excavating a site on the Menominee reservation in Wisconsin found an 850-year-old pot containing squash seeds, which were planted a few years later. Second-generation seeds from those plants were given to Sierra-Long, a pre-med chemistry major modified with environmental studies.

“I sometimes work on a traditional Native American farm owned by the Tohono O’odham Nation on the San Xavier reservation in Arizona, not far from where I live, In Tucson,” says Sierra-Long. “One day, a fellow farm worker gave me a vial of seeds, which came from the first plants grown from those ancient seeds.”

While not everyone agrees about which tribe was the first to discover the original heirloom seeds, there is broad consensus that this variety of summer squash was grown by indigenous farmers long before colonists arrived.

Sierra-Long didn’t know what to expect, but decided to plant them at the organic farm this year and see what would happen.

The 10 hardy seeds began life in a pot in a small greenhouse at Dartmouth’s farm. When the seedlings were big enough and sturdy enough, Sierra-Long transplanted them into soil sheltered by a larger greenhouse. “I have given them as much love and care as I could,” she says.

Her TLC has paid off. The bright green squash vines fill every nook and cranny of the greenhouse, snaking around and over each other. Some of the vegetables are roundish, in shades of green; others are oblong, with orange and yellow stripes.

On a warm autumn day, Sierra-Long inspects the bounty. She isn’t sure, she says, why there’s so much variety in shape and color. But the whole crop looks beautiful to her.

“I hand pollinated these,” she says, pointing to the plants nearest the door. “It’s really incredible that they grew so big, with a 70 percent germination rate. And the vines are really strong. For the first six weeks or so I didn’t even have to weed because the vines would yank out the weeds as they grew.”

Now that the squash is ready to harvest, Sierra-Long is extracting seeds so she can help preserve this ancient variety once thought to be extinct. She says the horticultural experiment has deepened her appreciation of organic farming, and of her own Native American roots.

“To see the life cycle of any plant is amazing, and to know that these come from ancient seeds—that’s even more amazing. It’s a miracle of nature that seeds were able to survive in a pot for 850 years, and then they were brought to life, and now all this squash is growing in a greenhouse in New Hampshire.”