Community invited to ski on more than 100 acres beginning Dec. 16. 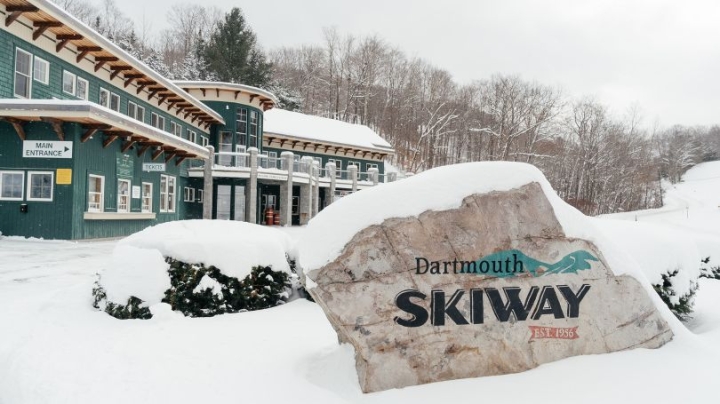 “We just want everybody to come out and ski,” says Doug Holler, director of the Dartmouth Skiway, which is scheduled to open Saturday, Dec. 16.

The Skiway will be opening for the 61st time since it was inaugurated on Jan. 12, 1957. Holler and Assistant Director Peter Riess are busy preparing for the beginning of the season, along with a staff of 80 and a handful of volunteers.

“I see the same faces here at the Skiway year after year,” says Riess, who has worked at the facility since 1990.

On more than 100 acres, including 30 trails ranging from the beginner’s area to the challenging Warden’s Schuss, the Skiway provides opportunities for skiers at all skill levels. Group classes are offered for age 3 and up; this year the Skiway boasts a new class for teenagers. Individual lessons also are available.

The Skiway has been the training ground of nearly 100 Dartmouth All-Americans, more than 30 national champions, and dozens of racers who went on to compete in the Olympics, many of whom now bring their families to ski. The College’s Alpine teams also frequent the Skiway three or four days a week during the season.

Every year, hundreds of Dartmouth students spend time on the trails, learning how to ski to fulfill Dartmouth’s physical education requirement—or simply for recreation. “There is a lot of student usage,” says Riess.

Students, faculty, staff, and the community at large can take advantage of a free hourly shuttle bus that runs every weekend during the season from campus to the Skiway, which is 14 miles away in Lyme Center, N.H.

According to Holler, the Skiway is unusual because “it’s one of maybe a half-dozen ski areas owned and/or operated by a university or college. There used to be a lot of them, but it’s one of a handful these days.”

Getting the snow where it needs to go in preparation for opening day at the Skiway. (Photo by Eli Burakian ’00)

For decades, the Skiway has been an important resource and an integral part of the Dartmouth experience.

Ski Patrol Director Matt Fulton ’96 leads the patrol, a group with about 60 members, almost all of whom are current Dartmouth students or alumni. The ski patrol responds to all injuries on the hill.

The McLane Family Lodge at the Skiway also served as the final celebration point for first-year trips this fall while Moosilauke Ravine Lodge, the traditional site, was being rebuilt.

For those who would like to enjoy the Skiway this season, special pricing is available for Dartmouth students, benefits-eligible staff, and faculty. With the exception of Christmas Day, lifts will operate from 9 a.m. to 4 p.m. seven days a week, starting Saturday, Dec. 16, dependent upon the temperature and weather conditions, which have an impact on how much snow accumulates and how much artificial snow can be made and groomed for the trails. The season will come to a close around the end of March, again depending on conditions.

The Dartmouth Skiway is scheduled to open this Saturday, but opening day is always subject to weather conditions. For information, call (603) 795-2143 or go to the Skiway’s website.

Julie Bonette can be reached at Julie.E.Bonette@dartmouth.edu.

Written by
Julie Bonette
Share this
FacebookTwitterEmail
In the News