From a Galaxy Far, Far Away: 2018 Winter Carnival

“Snow Wars: May the Frost Be With You” is the theme of this year’s celebration. 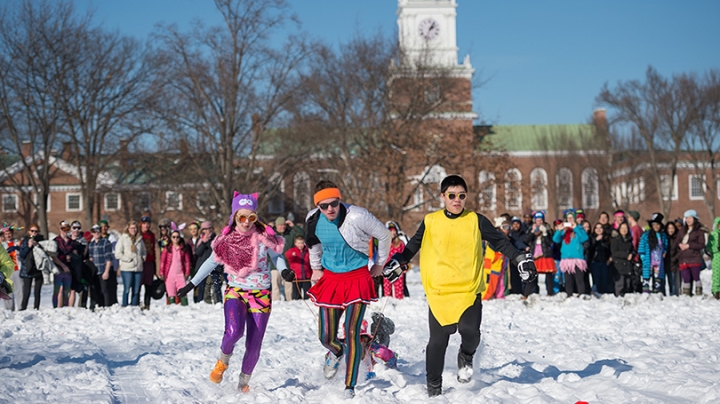 The human dogsled races are a hit every year—for participants and spectators—at winter carnival. (Photo by Jacob Kupferman)
1/29/2018
Body

This year’s winter carnival, “Snow Wars: May the Frost Be With You,” takes the full slate of traditional carnival activities into hyperspace—from the polar plunge into Occom Pond to human dogsledding to 99-cent Ski Day at the Skiway.

Carnival co-chairs Adam Baillie ’18, Miranda Worl ’19, and Tyler Work ’20 and an enthusiastic council of 20 students from all classes have planned a “vast galaxy” of opportunities for fun for everyone—including laser tag in Sarner Underground, a space-themed costume contest, and an Olympics opening ceremonies watch party at the Top of the Hop in the Hopkins Center for the Arts. For a full list of events, see the 2018 Winter Carnival Schedule.

Baillie—who has been involved with carnival since he did the polar bear swim as a first-year student (“the sensible thing to do”)—says this year’s parody theme has generated excitement. “It’s such a large universe, and there’s such fandom for it that people identify with it, so there’s a lot of opportunities for people to bring something they connect to into it.”

The festivities begin Thursday, Feb. 8, with the carnival’s opening celebration in Collis Common Ground, where the Dartmouth Chamber Orchestra will play.

Beginning at 10 a.m. Friday, Feb. 9, teams for the ice sculpture contest will gather on the Green for two days of crafting and carving. The sculpture contest has grown in popularity, says David Pack, associate director of student involvement. “Demand for it has been really high the last few years—we’ve had a waitlist. So this year we added five more sculptures.” The public can vote on favorite sculptures on Saturday afternoon.

From 3 to 5 p.m Friday, students can test their fortitude against the “force of frost” in the annual polar bear swim in the frigid waters of Occom Pond.

Baillie’s advice for first-time plungers? “Get there early, come with friends, be prepared—don’t wear something with 600 buttons on it, because you can’t get the buttons back on after you jump in.” Most of all, he says, “Enjoy it.”

Friday evening, the community is invited to the Top of the Hop to watch a screening of the opening ceremonies of the 2018 Winter Olympics—which this year features 15 Dartmouth alumni and student athletes in Nordic and Alpine skiing, biathlon, and ice hockey.

Saturday features human dogsled races at 1 p.m. and a “Snow Wars” costume parade and contest at 2 p.m., both on the Green.

“We’re hoping community members, faculty, students, staff, anyone who wants to participate, will turn out,” Pack says. “Dress up your kids, dress up your pets—there will be prizes.”

Also on Saturday, the winners of the ice sculpture contest will be announced on the Collis patio at 4 p.m.

Would-be defenders of the light or dark side can fight it out in a “Blaster Battles” laser tag game from 5 to 9 p.m. Saturday in Sarner Underground.

Throughout the weekend the ski team will be competing, with Alpine races at the Dartmouth Skiway and Nordic races at Oak Hill. And non-racers have an opportunity to ski as well, with 99¢ lift tickets at the Skiway all day on Sunday, with buses leaving from in front of Baker-Berry Library every half hour beginning at 9 a.m.

Swag from this year’s carnival—including a poster, T-shirt, and (new this year) stickers—will be available for purchase throughout the weekend. The student-created designs were selected by the council last month through its annual contest. “There were so many great designs, the council decided to showcase more of them,” Pack says of the decision to add stickers to the mix.

The winning poster was created by Regina Yan ’19. Yan and Raphael Hviding ’18 will both see their designs on this year’s official T-shirt, and entries from Dorothy Qu ’19 and Arij Elfaki ’21 will be available as stickers.

Work on the snow sculpture, currently taking the shape on the Green in the form of a dark lord’s helmet, is being led by Zoe Dineen ’18, Andrew Yohe ’18, and Ryder Stone ’18, with the support of a small group of alumni, staff, and area residents. The project is being funded by the Sphinx Foundation, with donated equipment from Gosselin and Trumbull-Nelson Construction.

Baillie says winter carnival is an opportunity for the community to embrace life in a wintry climate. “There’s a tradition to it that connects Dartmouth students through the generations,” he says. “It goes back to the original idea of getting outside and enjoying the winter.”