Dartmouth’s celebration of the Rev. King focuses on social justice and positive change. 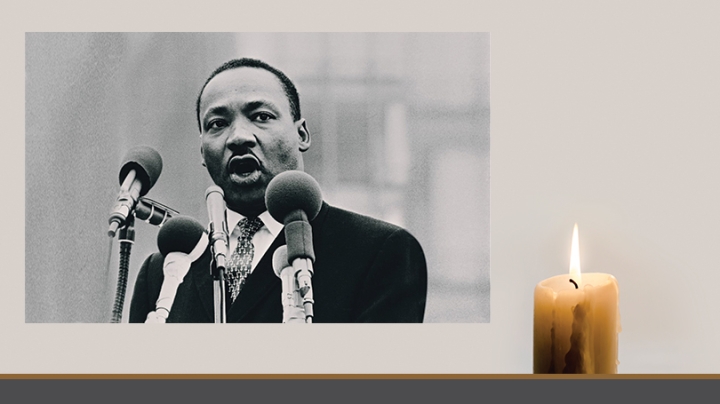 “We as a nation are putting up so many borders between us and the rest of the world, but also between different communities in this country, that we thought it appropriate to focus our attention for the 2018 Martin Luther King Celebration on this discussion of borders,” Ellis says.

“The sad thing is, I don’t believe MLK would have thought that we would be having this discussion about keeping people out in the 21st century. I truly think he would have believed that we would be finishing the discussion about making the people who are here feel very much a part of this country, and inviting others in, because we are a nation of immigrants,” she says.

Ellis says the keynote speaker for Dartmouth’s monthlong MLK commemoration, Hawaiian activist and native healer M. Kalani Souza, has spent a lifetime breaking down walls between people, between communities, and between cultures.

Souza is the founder and director of the Olohana Foundation, a community development and environmental justice nonprofit working for native and underserved peoples in Hawaii, the U.S. mainland, Alaska, U.S. Virgin Islands, U.S. Pacific Islands, Micronesia, and Mauritius. Souza says he aims, with his workshops, “to inspire, challenge, and entertain the listener while calling all to be their greater selves.”

He will speak and perform at 7 p.m. on Jan. 15 in Loew Auditorium at the Black Family Visual Arts Center, accompanied by Olohana Foundation members Sarah Purgus on ukulele and Alexander Meffert on guitar. The evening will also include remarks by Khymaya Perkins ’20, followed by a panel discussion with Souza, Purgus, and Meffert, which will be led by Ellis.

Prior to Souza’s keynote presentation, the Alpha Phi Alpha fraternity will hold Dartmouth’s 26th annual MLK candlelight vigil and procession, which begins at 5 p.m. on the first floor of Cutter-Shabazz Hall. To start the events on Jan. 15, the annual employee breakfast will be held from 8:30 to 10 a.m. at the Hanover Inn ballroom. Fred McKinney, managing director of minority business programs at the Tuck School of Business, will speak.

The Tucker Center’s Martin Luther King Jr. multifaith celebration will be led by the Rev. Jacqui Lewis on Sunday, Jan. 21, at 3 p.m. in Rollins Chapel, featuring the Dartmouth Gospel Choir directed by Walt Cunningham. Lewis is the senior minister of Middle Collegiate Church in Manhattan’s East Village. She is also the executive director of The Middle Project, an institute that prepares ethical leaders for a more just society, and is the author of The Power of Stories: A Guide for Leaders in Multi-Racial and Multi-Cultural Congregations.

Other events during the month-long celebration include a lecture by Joseph Graves Jr. of the Joint School of Nanoscience and Nanoengineering on Thursday, Jan. 11, titled “Smashing Agassiz’s Boulder: Debunking Biological Conceptions of Race Beyond the Millennium.” The public event, sponsored by the African and African-American Studies Program, begins at 4:30 p.m. in Haldeman 41. A dinner and reception follow from 5:45 to 7 p.m. in Kemeny Hall, Math Lounge.

The Center for Social Impact will explore themes of social justice throughout the day on Jan. 15 with a social impact film festival. Screenings will run from 10 a.m. to 6 p.m. in South Fairbanks 105. The center’s webpage has a full listing of times and films.

A complete schedule of movie screenings, public discussions, cultural events, and other happenings that are part of Dartmouth’s Martin Luther King Jr. Celebration is available on the MLK committee website.

The annual celebration also includes the presentation of the Martin Luther King Jr. Social Justice Awards to individuals who have answered the call to action. The awards honor members of the Dartmouth and Upper Valley community who have contributed significantly to social justice, peace, civil rights, education, public health, or environmental justice. They are sponsored by the Martin Luther King Jr. Celebration Committee, the Office of Institutional Diversity & Equity, the Tucker Center, the Dartmouth Center for Social Impact, and the Office for Diversity and Community Engagement at the Geisel School of Medicine.

The awardees will be recognized beginning at 5:30 p.m. on Thursday, Jan. 25, in Filene Auditorium at Moore Hall as part of a panel discussion called “Conversations With Change Makers.”

The Xi Lambda chapter of Alpha Kappa Alpha, the nation’s first black sorority, was chartered at Dartmouth College in 1983, and since then has upheld the national standards along with a strong commitment to women of color at Dartmouth and to community service.

Associate professor of sociology in African and African American Studies and Women’s, Gender, and Sexuality Studies