Adaptation of a Classic: ‘1984’ Reflects on Past and Present

The Department of Theater production, based on Orwell’s classic novel, opens Feb. 16. 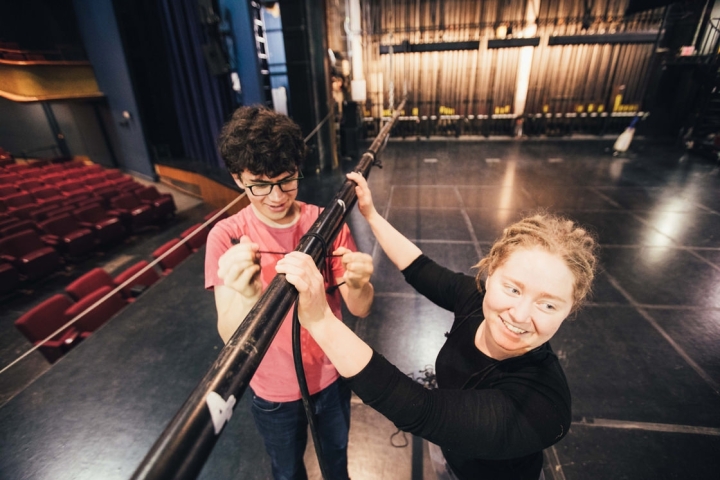 The Department of Theater will perform a contemporary adaptation of 1984, based on George Orwell’s classic dystopian novel about a totalitarian society ruled by double-speak and disinformation.

The show, which opens Friday, Feb. 16, culls from the novel and from an NBC University Theater radio adaptation of the book. The show will also include reading from Yale historian Timothy Snyder’s On Tyranny: Twenty Lessons from the Twentieth Century, published last year. In addition, original and archival video footage has been incorporated into the production to underscore the play’s relevance today.

“Even though 1984 was written nearly 70 years ago, the warnings and issues that it raises regarding the role of government in our society have really come to the forefront over the past few years and continue to be relevant today,” says director Peter Hackett, the Avalon Foundation Chair of the Humanities and professor of theater at Dartmouth. “I hope that this production provides audiences with a sense of immediacy and an opportunity to think about how its themes are recurring around the globe even now.”

The show takes place in the year 1984 in London, which has become part of the fictional country of Oceania, where the government seeks to control every aspect of its citizens’ lives, including their thoughts, through both surveillance and manipulation. The story follows Winston Smith—a conflicted soul who yearns to break away from the oppressive ruling body, The Party—and his love affair with Julia, a fellow Party member and rebel.

Hackett, who has spent the past few years studying Orwell, was the director of Orwell in America, a play about a fictional press tour Orwell makes in America following the publication of Animal Farm. The show—written by Joe Sutton and starring Dartmouth’s Associate Professor of Theater Jamie Horton—premiered at Northern Stage in 2016 and later moved to the 59E59 Theater in New York.

After Hackett finished the off-Broadway run of Orwell in America, his scholarship on Orwell was tapped once again. The sense in the theater department was that this year’s mainstage shows should be particularly relevant to the times, and 1984 sprang to mind.

“One of the real joys of being in the theater, and particularly being a director or actor, is that you get to go down these rabbit holes. You get to really spend time studying the issues that you come in contact with. You become, I don’t want to say an expert, but enough of an expert that you can produce a work of art on any subject that captures your imagination,” Hackett says.

Julie Bonette can be reached at Julie.E.Bonette@dartmouth.edu.

Written by
Julie Bonette
Share this
FacebookTwitterEmail
In the News