Study: The Lorax Was a Forest Creature, Not an Eco-Cop 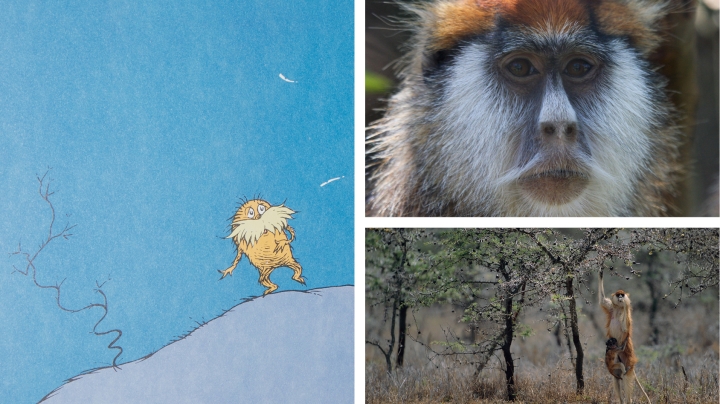 Ever since The Lorax, by Dr. Seuss (the pen name of Theodor Geisel, Class of 1925), was first published in August of 1971, it has captured the minds of countless young readers. It’s been translated into 15 languages, and by 2010, more than 1.6 million copies were sold. The spunky, furry orange creature called the Lorax, who “speaks for the trees,” is famous for his environmental ethics, as he demands that the Once-ler stop cutting down the Truffula trees to make yarn for the Thneeds.

In the book, as the landscape becomes dotted with Truffula tree stumps, the Lorax explains:

“NOW … thanks to your hacking my trees to the ground,

there’s not enough Truffula Fruit to go ‘round…”

But what exactly did the Lorax mean by “my”? Did he consider himself the owner of the forest, as some critics have claimed? A Dartmouth-led study proposes a new theory that the Lorax viewed himself as a part of the Truffula forest and was speaking as the personification of nature rather than as some sort of eco-policeman. The study is published in Nature Ecology & Evolution.

The findings propose that the Lorax had a symbiotic relationship with other species, debunking notions that he was trying to exert his authority over the forest. The research also finds that Theodor Geisel may have based his character on actual tree and monkey species in Kenya.

“Our analysis illustrates how the Lorax is not some self-proclaimed steward of the environment but rather a participating member of the ecosystem,” says lead author Nathaniel Dominy, the Charles Hansen Professor of Anthropology, whose expertise includes nonhuman primate foraging ecology.

“In fact,” he says, “many of the themes embedded in the narrative are textbook examples of ecological interactions. In my opinion, many of these dynamics were based on Geisel’s own observations while he was in Kenya, and it’s no accident that the Lorax looks the way he does.”

The illustrations in The Lorax provide important clues. For example, the spiky, barren trees outside the Once-ler’s home look like the whistling thorn acacia (Acacia drepanolobium), a common tree found on the Laikipia plateau in Kenya. If Geisel noticed these trees while he was there, then he probably also saw patas monkeys (Erythrocebus patas), which rely on the acacia tree for more than three-fourths of their diet. The acacia tree and the patas monkey have a commensal relationship in which neither species is harmed. It is this very notion of commensalism that grounds the story of The Lorax, according to the research team.

“The proposal that the patas monkey might be the real-life referent for Dr. Seuss’s Lorax introduces an interpretation of the children’s tale that undermines the core assumption of human exceptionalism. If we really want this biodiverse planet to thrive, we cannot consider ourselves as separate from the environment. This is the deep message of the Lorax: He is a part of the ecological system, not apart from it,” says co-author Donald Pease, the Ted and Helen Geisel Third Century Professor in the Humanities. Pease is the author of Theodor Seuss Geisel (Oxford University Press, 2010).

“If the Lorax is genuinely part of the environment, he is modeling the attitude we need to assume,” says Pease.

The study also finds that the Lorax has physical features similar to the patas monkey, as it has orange hair and stands on two legs. A computer-generated analysis used to compare their faces shows that the Lorax’s face looks more like one of the species of Kenyan monkeys than the most similar-looking Seussian character.

The research team writes that Lorax readers may be “witnessing a prophetic example of life imitating art imitating life,” as acacia tree populations in Kenya have been shrinking due to climate change, as have patas monkeys in recent decades.

Toward the end of The Lorax, Dr. Seuss makes a call to action through the Once-ler, who says:

“UNLESS someone like you cares a whole awful lot,

Nothing is going to get better.