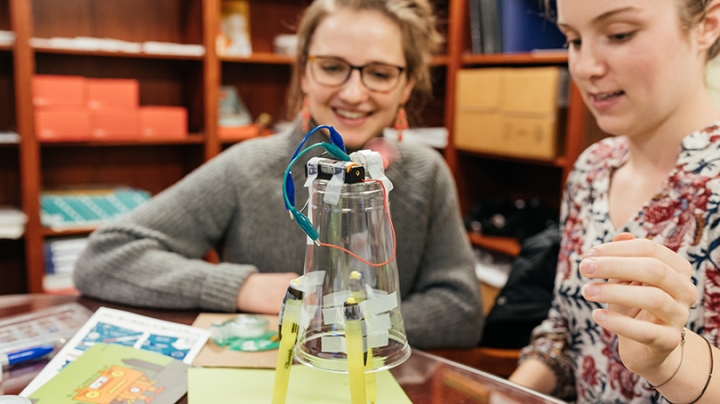 Their work is part of a research project led by Michele Tine, an associate professor in the Department of Education.

“The kits are aligned with science standards being used in Vermont and New Hampshire,” Tine says. “Before we distribute them, we’ll do pre-tests and take baseline measures about science identity and engagement. The students will get a kit mailed to their home once a month for a year, and then we will go back to see if those identity and engagement indicators have changed.”

Tine researches the gulf in academic success between students who live in poverty and those who don’t.  “There are two aspects to that work,” she says. “We identify cognitive processes that underlie the income achievement gap, and we create interventions that address those inequities and can improve education and learning and development for all.”

Research shows that children growing up in rural poverty are less likely than their urban counterparts to perceive themselves as STEM learners. There’s also evidence that rural children from low-income families lack the visual and spatialization abilities that many of their urban counterparts have. Tine says one way to develop those skills is to tinker—to construct simple, toy-like machines.

Twelve such machines are now being built and tested in Tine’s lab.

“This is a doodlebot,” says Clara Batchelder ’19 as she tapes three felt-tipped markers to an upside-down plastic cup. On top of the cup, there’s a Lilliputian rotator motor, with a fingernail-sized pencil eraser that serves as a fan blade. When she connects the motor to electric wires, the fan is supposed to send the cup skittering around on a white piece of paper as the markers make a colorful design.

The first time Batchelder touches the two wires together to complete the circuit, nothing happens.

“That’s actually good,” says Tine. “It’s the kind of trial and error we want the students to experience as they come to think of themselves as scientists.”

Sophie Lenihan ’20 tries out her doodlebot, using a soda bottle rather than a cup. Success! As the fan whirrs, the bot draws.

“I am excited about this project because, in middle school, science for me was about memorization and taking tests, and that was not very engaging. But building projects like these can change the way students think about science,” says Lenihan.

Many science toys, says Tine, are designed for affluent children with advanced STEM skills. Tine’s team is collaborating with the Montshire Museum in Norwich, Vt., on concept designs to ensure that the Build-It Boxes are accessible for children growing up in rural poverty. “We are mindful of things like reading level, as well as making sure each box contains all of the materials a middle school student will need to do an activity, rather than asking them to find them in their homes,” Tine says. “Our goal is to remove as many potential barriers to success as possible.”

“We are also writing explanation cards so the builders understand the science behind what they are making,” says Sonia Rowley ’19. For example, the doodlebot card starts with the question: “How does a circuit make my motor spin?”

Rowley says putting these kits together has helped her figure out how to communicate basic scientific principles to young children who may feel intimidated in class. The boxes are being sent to homes rather than schools, says Tine, because “research shows that out-of-school experiences are particularly effective and engaging at improving kids’ identity as scientists.”

The Build-It Box program is funded by a $25,000 Scholarly Innovation and Advancement Award from the Dean of Faculty Office, and an equal amount from the Hanover-based Jack and Dorothy Byrne Foundation.