A World of Science in a Box 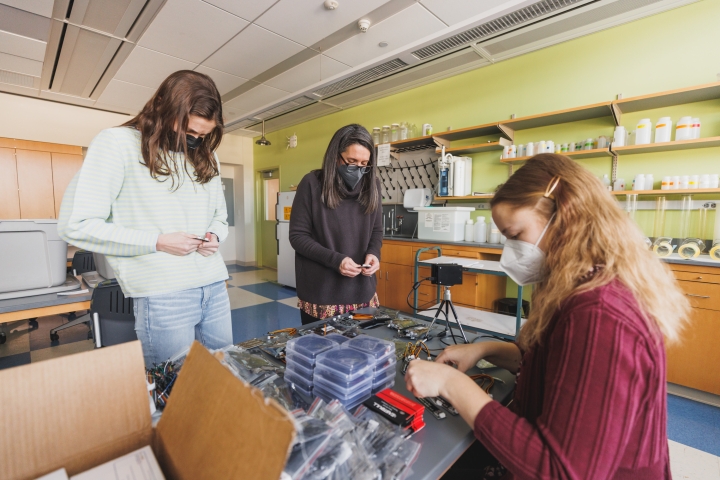 Terrariums were all the rage in Victorian England because they allowed urban botanists to grow and share plants in controlled environments, protected from industrial pollution.

More than a century later, the miniature gardens encased in transparent containers are being used by Dartmouth students and faculty to help teach middle schoolers about the behavior of ecosystems and the potential effects of climate change.

On a recent cold afternoon, a lab in the Class of 1978 Life Sciences Center looked more like a mailroom, as four students from the Guarini School of Graduate and Advanced Studies helped Michele Tine, an associate professor of sociology, and Roger Sloboda, the Ira Allen Eastman Professor of Biological Sciences Emeritus, build science kits. They filled sturdy boxes with plastic terrarium parts, mixing bowls for soils, seeds, notebooks, and scientific instruments, including cameras and thermometers. 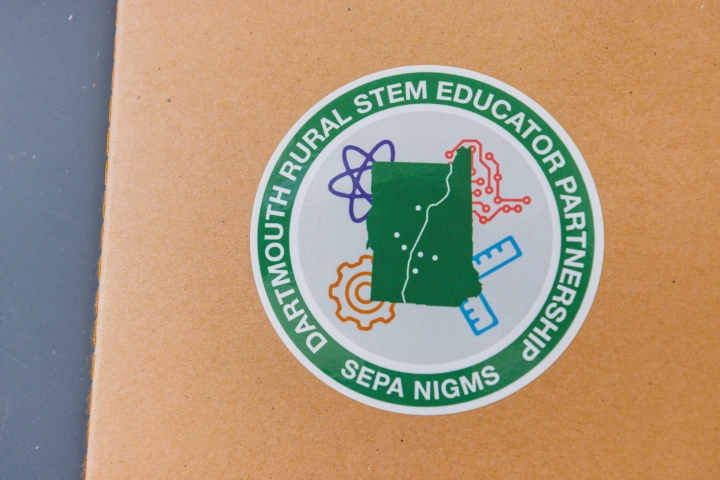 A sticker for the Dartmouth STEM project. (Photo by Robert Gill)

Over the next two months, the middle schoolers will plant and tend the terrariums, and Guarini students will visit their classrooms to assist teachers with the electronics and serve as near-peer mentors to the students as they study the tiny ecosystems. For example, by altering water and temperature, the budding scientists can see and measure the potential effects of environmental degradation.

The terrarium project is part of an initiative funded by a $1.3 million Science Education Partnership Award (SEPA) from the National Institute of General Medical Sciences of the National Institutes of Health. The Dartmouth Rural STEM Education Partnership brings together faculty from the Department of Biological Sciences, the Department of Sociology, Thayer School of Engineering, staff from the Montshire Museum in Norwich, Vt., and students from a wide range of Guarini School programs to collaborate with experienced middle school teachers in the creation of new science, technology, engineering, and math (STEM) programs for students and teachers in under-resourced schools.

“As home to a tight-knit community of researchers from a variety of disciplines, Guarini is ideally suited to host projects like SEPA, which provide an avenue for graduate students to work with both faculty and undergraduates to bring their shared passion for science into the public school arena,” says Guarini Dean Jon Kull ’88, a structural biologist and the Rodgers Professor of Chemistry.

Growing up in a small ranching town in Wyoming, Sam Streeter, a PhD candidate working at Thayer’s Optics in Medicine Laboratory, wishes he had had more science classes like the one where he is helping to implement the terrarium lesson plans.

“I had fabulous teachers, but this type of hands-on, inquiry-based exercise, where we get exposure to programming and electronics and hypothesis-driven kind of projects—I don’t think we had anything quite on this scale. And so I was really excited about connecting with students who are from rural places,” he says, as he loads components for small cameras into the boxes. To track plant growth and change in their mini-landscapes, middle schoolers will assemble the cameras and link them and other measuring instruments to state-of-the-art computer software.

It’s not the kind of equipment most Upper Valley schools can afford, says Tine, the sociology professor. “There’s a vast shift in focus on reading and math right now because of what’s tested in standardized exams. And therefore, that’s what gets the lion’s share of attention and funding.”

Tine spells out three major goals for the SEPA outreach.

“One is to create this really wonderful curriculum. Another is for science teachers in these rural schools to create a network among themselves, because they often work in isolation.  The third—and this has turned out to be really powerful—is to have our graduate students act as mentors for kids who may never have met a real scientist.”

On the same day that a set of science kits were being assembled, three students in Thayer’s First Year Research Experiences in Engineering Program were in the Thayer machine shop using a laser cutter to make terrarium walls and roofs, complete with an intricate Dartmouth logo.

Watching the machinists at work, Professor of Engineering Vicki May asks, “What’s not to love about outreach projects that are so much fun and have so much impact?”

May says her first-year students have been eager to help with terrarium designs and set-up—“things that the SEPA grad students just don’t have time for. They jumped in and learned SolidWorks, a computer-aided design program, designed and laser-cut terrariums, set up computers for the classrooms, and tested the curriculum, including the measurement aspects.” 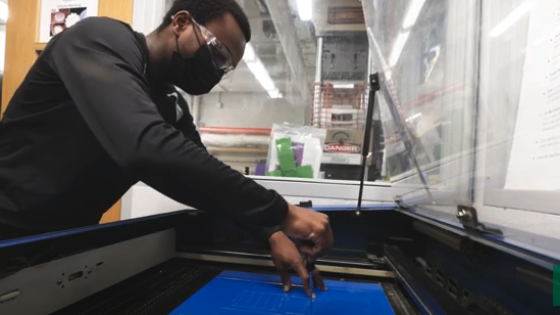 For Jonathan Sumaili ’25, who is from Kenya, learning to operate the laser-cutting machine has fueled his interest in engineering.

“I like that what we are doing here is important to society,” he says. “These things won’t just end up on a shelf somewhere; they will be used by middle school kids to help them understand difficult concepts.”

If an abiding love for science happens to take root in these plastic boxes, the terrarium project will have been a success, says Sloboda. Newly retired from teaching, he’s a research professor and principal investigator for the SEPA grant.

“It’s just a little payback,” Sloboda says. “I had an absolutely terrific career at Dartmouth and I’d like to get more kids interested in science. If it makes a difference in just one kid’s life, it’s worth it. But I really hope we reach more than just one kid.”