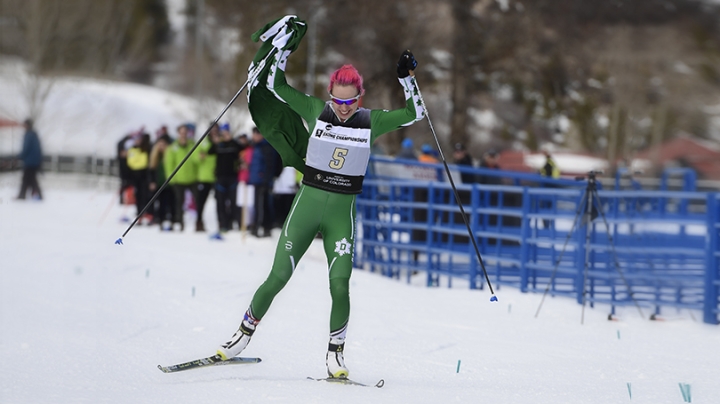 Katharine Ogden ’21 won two national titles in Nordic events and national titles in men’s Alpine went to Brian McLaughlin ’18 in the giant slalom and Tanguy Nef ’20 in the slalom, leading the Dartmouth ski team to a third-place finish in Saturday’s NCAA Nationals in Steamboat Springs, Colo.

Also last weekend, the men’s hockey team ended a post-season run by dropping the tie-breaking third game of the quarterfinals to Harvard 4-2 in Cambridge.

Ogden swept the NCAA Nordic races, finishing the 5 km classical 46.9 seconds ahead of the nearest racer, and winning the 15 km freestyle with 37.6 seconds to spare. She is the first Dartmouth skier in more than 50 years to win two national titles in a single year, and the first female to win a cross-country race for the Big Green.

Ogden, a Vermont native who skied in high school at the Stratton Mountain School, says Dartmouth’s skiing culture played a big part in her decision to come to the College. Dartmouth’s presence in the Winter Olympics during her first season as a Big Green skier added to the excitement, particularly watching fellow Stratton Mountain alumna Sophie Caldwell ’12 skiing for the U.S. Nordic team, she says.

“One day I would love to be one of the Dartmouth alums racing in the Olympics. A lot of the reason I decided to come here for school had to do with growing up with Sophie Caldwell and seeing what a positive experience she had at Dartmouth,” Ogden says.

On the first day of the NCAA competition, Brian McLaughlin ’18 became the first Big Green skier in 19 years to win the NCAA title in the giant slalom, just 0.19 seconds ahead of teammate Tanguy Nef ’20, who finished second, leading the Dartmouth ski team to the top of the NCAA standings after the first day. Two days later, Nef took the National title in slalom, beating his closest challenger by more than three-quarters of a second, thanks to a blazing second run.

At the end of the NCAA championship, Dartmouth was third overall in total team points behind perennial powers University of Denver, in first, and University of Colorado, in second. The last time Dartmouth won the top NCAA skiing title was in 2007.

The Dartmouth men’s hockey team saw its season come to an end at the hands of Harvard Sunday afternoon. The fourth-seeded Crimson won game 3 of the ECAC Hockey Quarterfinal series, 4-2, to advance to Lake Placid next weekend and the league semifinals.

In game 1, Dartmouth jumped out early, defeating Harvard 4-1 on Friday night in Cambridge. Harvard retaliated, defeating the Big Green 7-1 in game 2 and forcing the tiebreaker game that ended Dartmouth’s season.

“We battled all weekend and to the last whistle tonight,” head coach Bob Gaudet ’81 told Dartmouth Big Green sports. “There is a locker room full of guys right now who are disappointed with the result, but I am so proud of how hard they played not only tonight, but all year.