The economics major says liberal arts courses helped him in the audition. 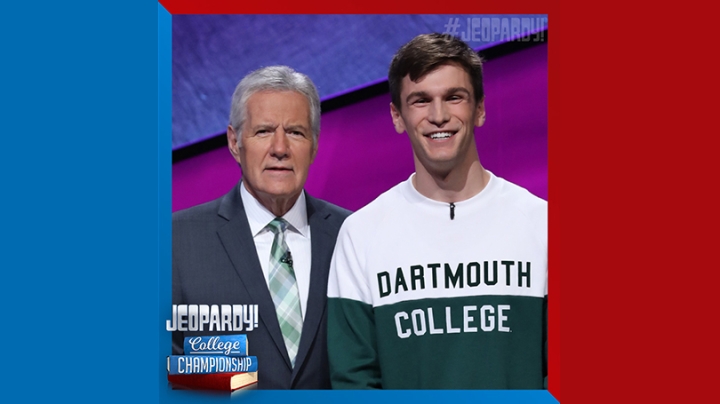 April 19 Update: Eric Thorpe ’18 Thorpe advanced to the semifinals but not to the finals. “It was awesome to watch the games in the same off-campus house where it all began with my good friends,” he says. “It was a particularly cool feeling when we all watched me make it into the semifinals with the last wild card spot. While I’m disappointed that I did not advance to the final, I was humbled to have played the way I did in a competitive game against some really talented players.” Thorpe took home $10,000 for his efforts. See highlights from the semifinals here.

Let’s say you’re playing Jeopardy! and you get this clue:

“Dartmouth College student who is making his television debut this week in the Jeopardy! College Championship.”

Thorpe comes from Laguna, Calif., and majors in economics with a minor in government. He plays water polo, serves on the Special Programming and Events Committee, and belongs to the Psi Upsilon fraternity. The “fun fact” about him on the Jeopardy! website: In high school, as a musician and swimmer, he once rushed to a concert, carrying his cello, while wearing only a Speedo bathing suit.

It was at Dartmouth that Thorpe became a fan of the quiz show, which, in its 34th season of syndication, has 23 million viewers each week.

“I started getting into watching Jeopardy! over sophomore summer with my roommates in our off-campus house,” he says. “It was a great way to unwind, and we always joked that I maybe would have a shot at getting on.”

Turns out it was no joke. On a whim, he took the online exam this fall, got selected for an in-person audition (an exam/interview that involved practicing with the buzzer), and got the call saying he was selected in December. He says he didn’t spend a lot of time preparing for the audition.

“I found that I had a relatively strong background for a lot of the show’s categories due to the history courses I’ve taken for my major, as well as other liberal arts classes, including ‘History of Russian Civilization’ and ‘Masterpieces of Western Music.’”

The Jeopardy! experience, Thorpe says, has been “surreal,” and he’s grateful for support from friends, family, his fraternity, and the water polo team. “Taping the episodes towards the end of winter term finals was a little stressful, but all of my professors were understanding. I’m a little nervous to be on TV, but I am excited to watch with all my friends this Friday night.”

The college championship runs April 9-20. There are 15 contestants, with a lot at stake beyond bragging rights. The winner takes home $100,000 and a berth in the show’s “Tournament of Champions.”