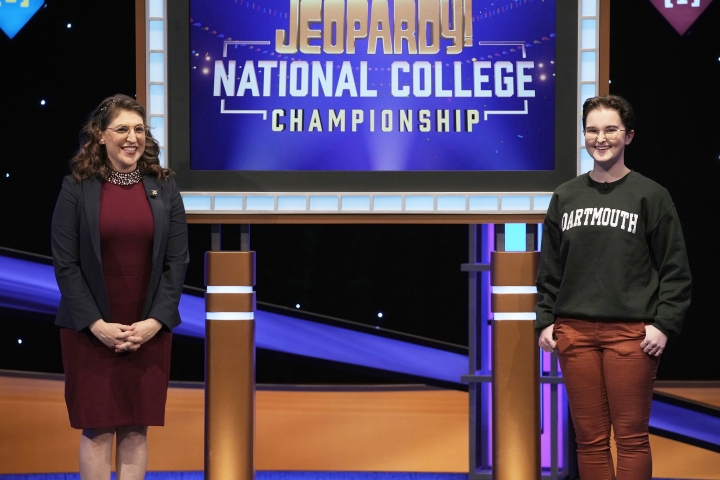 Update: Gus Guszkowski ’22 briefly took the lead in the second half of the Jeopardy! quarterfinal televised on Feb. 8 but ultimately did not advance to the second round, exiting the competition with $10,000.

Last Thanksgiving, Gus Guszkowski ’22 had much to be grateful for. During break, the James O. Freedman Presidential Scholar landed a spot on ABC’s Jeopardy! National College Championship.

Featuring 15 schools, the competition was videotaped in November and will begin airing on Feb. 8. Until then, contestants are sworn to secrecy about how they fared but are permitted to speak about the path that led them to the Burbank, Calif., television studio.

“My dad is completely psyched because he has been a Jeopardy! super fan for as long as I’ve been alive,” says Guszkowski. “He’s auditioned for the show something like 13 times. In fact, he sent me the link to the online application tests.”

Which led to a successful Zoom audition. But despite clearing a string of virtual hurdles, Guszkowski landed on the set with a serious case of the jitters.

“Before I went, I was so nervous because there were 36 of us, plus three alternates. Meanwhile, I kind of did this on a whim, and got way further than I expected to.”

I’ve been joking that I blacked out, and when I woke up, I had more money than I started with.

But staying focused and in the game is even harder than it looks on TV.

“You’re shooting six games a day. And you have to take breaks as they intensively clean the entire set, because thankfully Sony and Jeopardy! take their COVID protocols really seriously. I felt very safe there, but we were sometimes pulling 11-hour days at the studio.”

Guszkowski’s decision to attend Dartmouth was spurred by hazelnut gelato.

“I live in northeastern Connecticut—the part of the state with a lot of cows and not so many people—and my parents and I would pass through Hanover on our way to vacation in Canada,” says Guszkowski, who uses they/them pronouns. “We always got really, really good gelato in that store that has unfortunately since closed.”

“I wasn’t originally going to tour Dartmouth, but my parents said, ‘Let’s just do it.’ And then I ended up falling in love with the place and coming here.”

The classics major is capping their senior year with two ambitious projects.

“I’m writing my honors thesis about the overlooked significance of hair in Euripides’ tragedy, The Bacchae. And for my senior fellowship, I’m translating the Greek play into English and directing a multidisciplinary production,” Guszkowski says.

All that classics training has literally paid off.

“I took a class with Professor Lindsay Whaley called ‘The End of the World,’ and that came in quite handy for one Jeopardy! question.”

Guszkowski is pleased with the outcome of that frenetic November week, but the memory of it is a bit foggy. “I’ve been joking that I blacked out, and when I woke up, I had more money than I started with.”

That was a nice surprise.

“I mean, almost everybody had been playing trivia their whole lives, and I was definitely an outlier on that front. But also, almost everybody I met was so kind. Here are all of these cool people that I have shared interests with, and I did make really close, lasting friendships there.”

Guszkowski’s proud family and friends will be watching on Tuesday, but the contestant will not tune in.

“I’d just fixate on the times when I made a weird face or when I didn’t buzz in fast enough on a question I knew. Let it remain like a blurry, hazy, good memory,” Guszkowski says.