As the arts center prepares for renovation, the director begins her second term. 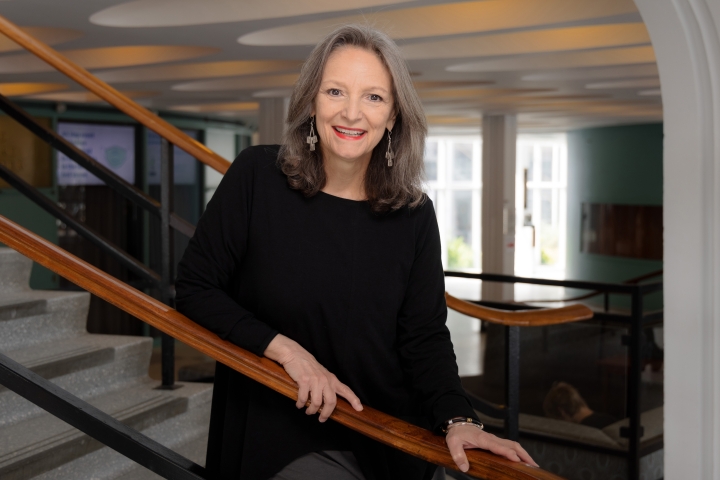 As the Hopkins Center for the Arts prepares for a major expansion and renovation—set to begin this year—Mary Lou Aleskie, the Howard Gilman ’44 Executive Director of the Hop, has signed on for a second term as director.

“Mary Lou Aleskie’s vision for the Hop as an expansive academic arts center that brings the world to Dartmouth—and Dartmouth to the world—is having a profound impact on this campus,” says Provost David Kotz ’86.

“The arts give us the power to be more creative, more innovative, more connected, more deeply human—and Dartmouth is small enough that this connection through the arts can be transformative well beyond the boundaries of the Hop and the Arts District,” says Aleskie, who came to Dartmouth in 2017. “I don’t know of another place where the possibility of having the arts centered in community is as readily achievable.”

I don’t know of another place where the possibility of having the arts centered in community is as readily achievable.

An example of this is the new Arts Integration Initiative, a collaboration with Dean Madden, the vice provost for research, that is funding faculty and student research projects across disciplines that incorporate the arts. In its pilot year, with support from the Tuck School of Business, the initiative awarded over $110,000.

“There are leaders on this campus who believe in the power of the arts and want to see it expand as part of the Dartmouth DNA,” Aleskie says. “They’re willing to think over the long term about how the arts can empower the entire campus region, and ultimately the globe as we develop more intentional relationships around the world. This way of thinking can continue beyond any one director’s tenure.”

Lessons From the Pandemic

When the COVID-19 pandemic shut down campus in spring 2020, Aleskie and her team launched Hop@Home, a series of virtual events that she describes as “one of the most robust, tailor-made, focused platforms for digital exchange anywhere in the country.”

Hop@Home brought performances to new audiences and to places where the Hop had never gone before, including people’s living rooms the world over. “We were able to lift up artists at a time when they were extremely vulnerable,” she says.

As the Hop has returned to in-person performances this year, lessons from the pandemic remain.

“We learned that intimacy matters,” Aleskie says. “It’s about the experience of being together—knowing that this particular live event, with these people, will not happen in this way ever again, and cherishing that, whether it’s 35 people or 900 people. And we now know that there are ways for us to be live and remote at the same time.” 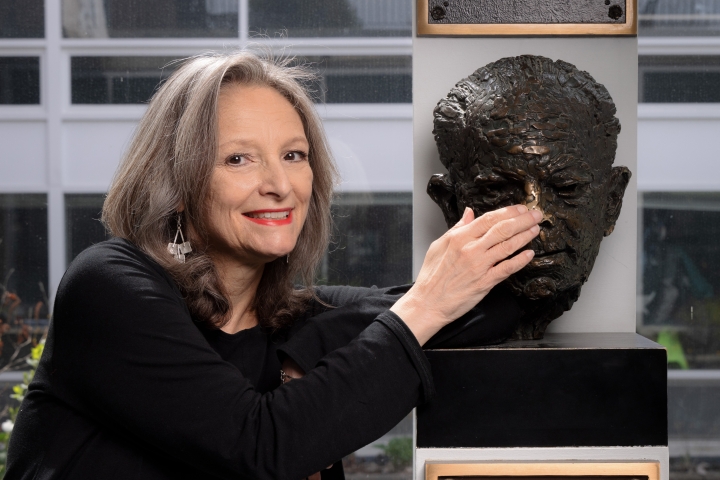 Mary Lou Aleskie with the bust of Warner Bentley, the Hop’s first director, sculpted by Thomas Bayliss Huxley-Jones in 1968. Generations of students have rubbed Bentley’s bronze nose for luck on their way to class. (Photo by Rob Strong ’04)

The pandemic also helped the Hop clarify and recommit to diversity, equity, and inclusion. “Practices in the arts haven’t always been equitable as a field, and we’re working to change that,” Aleskie says. “We want to center underrepresented stories and make the Hop a home for everyone.”

One expression of this ethos: the forthcoming multimedia opera, The Ritual of Breath Is the Rite to Resist, which premieres in Spaulding Auditorium Sept. 16 and 17, followed by the West Coast premiere in October.

Produced by the Hop with co-commissioning support from Stanford Live, the production interweaves music, text, visuals, and movement, gathering audiences in response to state-sanctioned violence against Black lives. Evoking the 2014 killing of Eric Garner, who died after being placed in a chokehold by a New York police officer, the production is a co-creation of painter Enrico Riley, the George Frederick Jewett Professor of Studio Art; poet Vievee Francis, an associate professor of English and creative writing; and Stanford-based composer John Berger. The work features an extensive online platform preparing audience members for the live experience and calling the community to a creative act of resistance.

The Hop opened in 1962—the first college or university center of its kind in the U.S. to bring the arts under one roof. The Hop has earned a reputation for its distinctive approach to arts education and for the range of live performances by leading and emerging artists in dance, music, theater, film, and other creative disciplines that it attracts every year.

In February 2021, Dartmouth named the design firm Snøhetta as the architects for the Hop’s renovation and expansion. The vote of confidence in the project, which came early in the pandemic, “was an important moment,” Aleskie says.

The expansion is part of a broader reimagining of the Hop to support more ambitious cross-disciplinary work on-site and to meet the growing demand of students and faculty for artistic experiences.

Built into the new design will be the ability to combine live, in-person performance with virtual accessibility. “That was always in the plans, but the pandemic validated it as one of our primary choices for the Hop of the future,” she says.

The design for the $88 million project emphasizes accessibility and increased performance and practice space. Spaces will encourage gathering, including in the new entrance forum and in an improved and reconfigured Top of the Hop. A recital hall overlooking the Green will accommodate classes, rehearsals, and performances, and Alumni Hall will be transformed into a state-of-the-art performance lab equipped to realize the full visions of contemporary experimental artists. Elsewhere, the design calls for a dedicated professional-caliber dance studio and acoustic improvements that will expand the capacity of the Hop’s flexible collaborative workspaces.

Construction is planned to begin by the end of this year and continue through 2025, with some or all of the building expected to be closed for at least part of that time. During construction, Aleskie and her team plan to continue to bring the arts to the Dartmouth community, on campus and beyond.

Films will continue to be shown in the Loew Theater at the Black Family Visual Arts Center, and Hop student ensembles will have spaces around campus to rehearse and perform—venues such as the Hood Museum of Arts, Dartmouth Library’s Baker-Berry Library, athletics facilities, and the newly opened buildings in the West End. Faculty offices, classrooms, and practice rooms will move to alternative locations on campus.

In addition, community members can expect to see Hop programming on the road.

“We plan to be in places where we wouldn’t otherwise go. We’re working with a variety of New Hampshire-based artists to identify places around the state to share artistic work that doesn’t come to them often,” Aleskie says of the construction period ahead.

“Whatever we do on campus, we will find a place to do somewhere else in New Hampshire. The Hop will not retreat. The Hop will expand and explode.”