Grants for Humanities Faculty to Branch Out

Six members of the arts and humanities faculty have received New Directions grants. 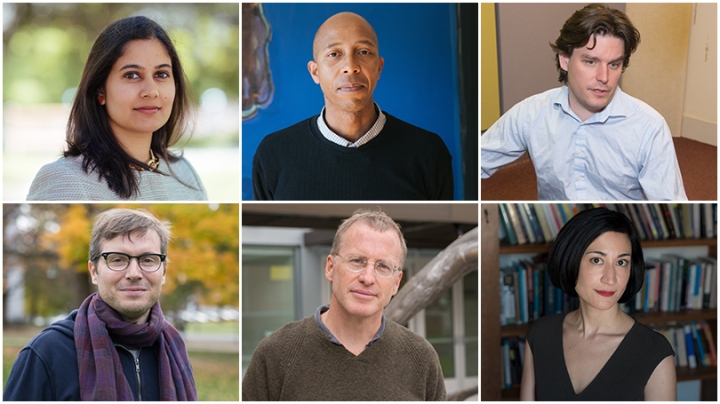 A film historian and documentary filmmaker learning to make nonfiction radio. A professor of Spanish studying Italian to understand how a major political thinker from Italy was received in Spain. A studio artist collaborating with a composer and a poet to bring paintings, words, and music together in live performance.

These are some of the projects supported by New Directions in Humanities Scholarship and Arts Practice grants—a new program created by the Office of the Associate Dean for the Arts and Humanities, with funding from the Office of the President, that encourages faculty in the arts and humanities to pursue projects outside their primary fields of expertise.

“The purpose of these grants is to give faculty the chance to experiment with their research, branching out into new disciplines, languages, or artistic formats that both enrich their primary fields and offer exciting new pathways for future development,” says Barbara Will, associate dean of arts and humanities. “We hope that these grants allow tenure-track and established faculty members to rediscover the excitement of being on the threshold of new beginnings.”

The idea is for faculty to push the boundaries of their disciplines and follow their intellectual curiosity, wherever it leads. As the call for proposals put it, “A sense of risk is implicit to this undertaking.”

“This kind of grant is especially important for humanists who are trying to rethink the relevance of what we do, and how the questions we ask and how we go about answering them are different now with globalization, integration of markets, of culture, and so on,” says Tanoukhi. “That set of questions actually requires venturing into different disciplines and trying to follow the question, rather than the field.”

An Opera in Sound, Word, and Image

For painter Enrico Riley, the grant comes at a time when he was looking for the means to expand his collaboration with Stanford-based composer Jonathan Berger. The two—both recipients of the Rome Prize—began to work together on projects combining images and music while in residence last year at the American Academy of Rome.

Now—joined by poet and Associate Professor of English and Creative Writing Vievee Francis—they are working on an opera-scale project that draws on Christian and Jewish liturgy, Yiddish folktales, and the last words of Eric Garner, who was killed by police chokehold in 2014.

The New Directions grant is critical, Riley says, because he and his collaborators use an organic process of creation in which images, music, and words inform each other.

“Just knowing that the whole spirit of the grant is open and experimental is hugely important,” Riley says. “It allows you freedom to set up the project however it evolves. We’re open to shifts in direction, and that allows you to craft a project that’s in line with your vision as your vision is emerging. You don’t necessarily know what the outcome is going to be.”

Riley, Francis, and Berger plan to workshop the composition this summer at the Hopkins Center for the Arts.

Bioethics and Gender in the Islamic Tradition

While researching her first book project on gender in medieval and classical Islamic philosophical ethics, Zahra Ayubi became interested in “implications of my work on contemporary gender ethics in Muslim communities”—specifically, how ontological understandings of women’s bodies affect medical decision-making in a traditionally male-centered religious context.

The project will allow her to bring her expertise in feminist philosophy of religion to bear on the existing field of Islamic bioethics, which, Ayubi says, “has to date been concerned with very different questions.”

“Doing work on that would require several shifts in my research focus, which is a risk that this grant is designed to support,” Ayubi says. “Bioethics is not my field, yet I find that the precarious situation of patients in tough medical circumstances that require consideration of religion and bioethics is telling of deep underlying philosophical ideas—in Muslim traditions specifically—about the nature of women’s humanity.”

Antonio Gómez, who is working on a book about how Marxist philosopher Antonio Gramsci was received in Spain during two periods of crisis—the collapse of the fascist dictatorship in the 1970s and the financial crisis that began in 2008—realized that several key works of Gramsci have never been directly translated into Spanish. English translations and selections are not sufficient, he says, because they tend to be filtered through the lens of American experience.

But in the 1970s, he says, “Intellectuals in Spain explained Gramsci directly from Italian—they were reading the Italian readers of Gramsci. So without being able to read Gramsci in Italian, it’s difficult to reconstruct how their reconstruction of Gramsci is different from the American trajectory.” Such readings are particularly interesting because of parallels between how Spain and Italy developed popular national identities in the 20th century.

“This is going to be a transnational, multilingual, interdisciplinary project, so it’s something that I don’t exactly know how to do. I know I’m going to discover my way as I move forward, and this idea of learning to do something for the first time is exhilarating,” Gómez says. “It’s wonderful that Dartmouth is finding ways to keep faculty engaged and creative and taking risks and crossing boundaries.”

Capitalizing on a Radio Renaissance

Jeffrey Ruoff, a historian and filmmaker whose work includes Still Moving: Pilobolus at Forty, a portrait of the Dartmouth-rooted dance troupe, has been looking for ways to branch into documentary radio. “There’s been a renaissance in our digital age in radio and podcasting,” he says. “It’s a documentary moment. And sound art is a different animal from making documentaries in film and video. It’s also way less expensive, so it seems like a quicker way to respond to things that are happening in the world.”

The New Directions grant will allow Ruoff to apprentice with New Hampshire Public Radio’s Word of Mouth, a program hosted by Virginia Prescott that “explores the nooks and crannies of New Hampshire,” according to the program’s website.

“I can’t wait to sit in on or contribute to weekly meetings with Virginia Prescott and her producers as people brainstorm stories, because they’re living and breathing documentary all the time,” he says.

Ruoff is enthusiastic about the impulse behind the grant. “I was very excited when I heard that the College had made a decision to help faculty members take a chance and grow into some ancillary field,” he says. “One of the great opportunities about being a faculty member is you’re eternally a student, and you get to keep learning all the time—we have to, because our fields are constantly evolving and changing. But it’s also interesting to have time to do something new.”

A New Theory of Reading

For literary theorist Nirvana Tanoukhi, the grant provides the flexibility she needs to develop an ambitious interdisciplinary line of inquiry that bridges accounts of reading in literary theory with a field new to her: a branch of linguists known as pragmatics.

“I’m trying to rethink how reading works,” she says, “specifically, to explain how we make sense of texts from unfamiliar cultural contexts. Literary theories of reading essentially say that without a grasp of a text’s local context, we’ll misinterpret it.

But, she says, “reading out of context is no longer an aberrant case in otherwise smooth communication. Today, you don’t have to go very far to find yourself having to interpret something, written or said, that feels distant or foreign. If we can’t find a new basis on which interpretations can be valid, we are conceding that what feels like reading is actually misunderstanding, or mere projection.”

Why do this? “My hunch is that a democratic society cannot afford to ignore the question of interpretation, because the democratic tradition is based on two assumptions about individuals: that if they are free to interpret they can think for themselves, and that living with others who are not like them they can build common ground through critical debate,” she says. “There can be no genuine commitment to democracy after globalization without an account of how cross-cultural understanding is still pragmatically possible and therefore attainable.”

Her project gets at questions central to the purpose of the humanities. “If we can sketch what we do and don’t do when we’re reading out of context, we can pinpoint what is still valuable in the interpretive process,” she says. “That will also clarify what the contribution of interpretive disciplines—meaning, the humanities—is to knowledge today.”

Like Ruoff, Spencer Topel plans to use the grant for a kind of apprenticeship—embedding himself in an architecture firm to learn some of the tools and processes that go into designing the sound of large structures. A composer and sound artist, Topel’s interest in large-scale sound installations grew out of a collaboration with installation artist and Professor of Studio Art Soo Sunny Park on an installation at the deCordova Sculpture Park and Museum in Lincoln, Mass., in 2011.

“I’m increasingly interested in scaling up my sound art installation practice,” he says. “The grant was an opportunity to formally present an idea of bridging some of the interesting work that’s happening in sound art with kind of a parallel track that’s been happening in architecture.”

With the grant, as well as a CompX grant he has received from the Neukom Institute, he plans to use generative computer-aided design (CAD) to model the sounds of structures before they exist.

“I’m attracted to the idea of bringing the virtual back to the physical world,” he says—generating unimagined sounds from structures, and unimagined structures from sounds. “Especially for these larger-scale installations and sculptures, I want to be able to model what they’re going to sound like once they’re built.”

And, he says, “I think there’s just something exciting about very large and very strange instruments. Once you hear the sounds that they make, it lives with you and changes how you listen to the world.”

The New Direction grants are “a bold statement,” Topel says. “Academics often get blamed for being risk-averse or too careful in our practice, and this is an opportunity where the institution says, yes, we actually want you to take risks,” he says. “It’s a really key opportunity to foster interdisciplinary growth in new directions—ideas that we can’t really think of yet.”