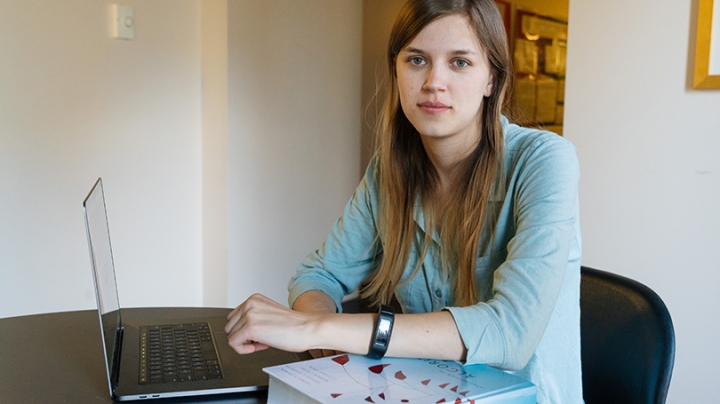 When Margaret Lawson ’18 presented her research at an international conference on high-performance computing, held last November in Denver, Colo., she was speaking to about 125 of the top researchers in the field. To them, the undergraduate came across as a colleague.

“None of them, except those who knew Margaret personally, had any idea she was an undergrad,” says Jay Lofstead, who worked with Lawson at Sandia National Laboratories in Albuquerque, N.M. “When they found out she was looking for a PhD school, they all started recruiting her.”

At Sandia, where Lawson conducted research during a two-term internship, she was “a force of nature,” Lofstead says. He initially tried to talk the undergraduate out of the internship. “I warned Margaret that I would give her far too much work that was far too hard, with completely unreasonable deadlines,” he says. “She thought it sounded like fun.”

A native of Davis, Calif., Lawson spent the internship constructing a scientific data management system that would build, she says, “a way for people to find data they care about amongst a lot of data they don’t care about.

“If you want to simulate something really big, such as how atoms behave, and you want to look as close to individual atoms as you can get, it requires a lot of computational power, and this produces a lot of data. So if you are only interested in certain pieces of it, this can give you a simplified route to finding them.”

This research formed the basis of the paper Lawson presented at the conference in Denver and led to her being named a finalist for a Computing Research Association Outstanding Undergraduate Researcher Award. She was nominated for the award by Professor Tom Cormen, whom she describes as “a mentor to me throughout my time at Dartmouth.”

Lawson had come to Dartmouth to study economics, she says, but that changed. “The school had one of the best econ departments, and Tuck is one of the best business schools in the country, but I soon realized I did not want to major in economics. My next best guess was psychology, and I took ‘CS 1’ (computer science) to fulfill a prerequisite.

“Professor Cormen was my teacher. I wound up absolutely loving it, and he really encouraged me to consider pursuing it,” she says. “I had the course in my freshman winter, which worked out quite well. I know plenty of people who didn’t end up taking ‘CS 1’ until their junior or senior year, and by that time it is too late for them to switch majors.”

Getting an early start proved advantageous. “I made an active decision to try to take as many other courses as I could, and get the full liberal arts experience,” she says. “I thought as an undergraduate I would take advantage of having so many experts in so many different fields around me.”

With her sights set on graduate studies in computer science, she expects there will be ample opportunity for more technical coursework. Numerous graduate schools competed for her enrollment, but Lawson decided to attend the University of Illinois at Urbana-Champaign. There she will study with Professor William Gropp, director and chief scientist of the National Center for Supercomputing Applications, an on-campus partnership of the university, the National Science Foundation, and the State of Illinois.

Lawson is now back on campus, though she still connects with Sandia as a “remote year-round intern,” says Lofstead, “and we expect to continue that relationship as long as she’ll have us.”

As Lawson’s graduation draws near, the work she did at Sandia has reemerged as the subject of her senior thesis. Lawson had approached Dartmouth’s Charles Palmer to explore working with her on the thesis research topic.

“Most thesis students lack a clear topic when they begin searching for an adviser, but she not only had a well thought-out topic and a plan for moving forward, she had already published her research with her coauthors at Sandia National Labs,” says Palmer, an adjunct professor in the Department of Computer Science. “After our first meeting, I believe my comment was, ‘You don’t need me at all—just keep doing what you’re doing.’

“Her explanations and writing were always clear, persuasive, succinct, and on-point,” Palmer says. “Many brilliant researchers fail to have impact because they lack such effective communications skills, both listening and speaking. Margaret undoubtedly has a great future ahead.”