Assistant Professor Carey Nadell studies microbes that aggregate and function as a group. 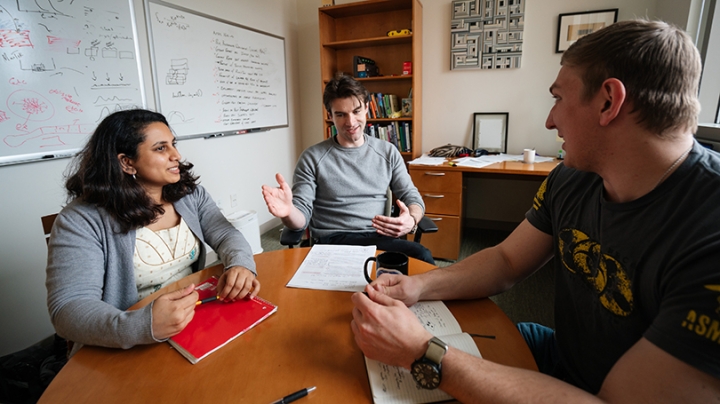 “Bacterial biofilms are like cities of microbes, very small cities,” says Assistant Professor Carey Nadell, a microbiologist who looks at the behavior of microorganisms through the lens of ecology and evolution, learning how they interact with each other and their environment. “We are interested in what the cities are for, why the bacteria make them in the first place.”

Billions of microorganisms come together to form these biofilms—some harmful, some beneficial—sticking to each other and to surfaces with a glue they secrete. Nadell says bacteria in biofilms are at least as common, if not more common, than solitary microbes “swimming around on their own.”

Biofilms are ubiquitous. As part of the microbiome, they form on our skin, our teeth, and even inside our gut, where they help us in the digestion of our food. They also aid in proper immune system development.

“Bacteria working in groups can accomplish many things, including breaking down complex nutrients that they cannot eat on their own, and some bacteria actually hunt other microbes as groups in a way that is very unexpected and compelling,” says Nadell. “But biofilms are also involved in the infection and transmission of bacterial diseases such as cholera and can be a major problem in medical contexts ranging from dental cavities, burns, and wounds, to cystic fibrosis, chronic obstructive pulmonary disorder, and prosthetic implant failure.” 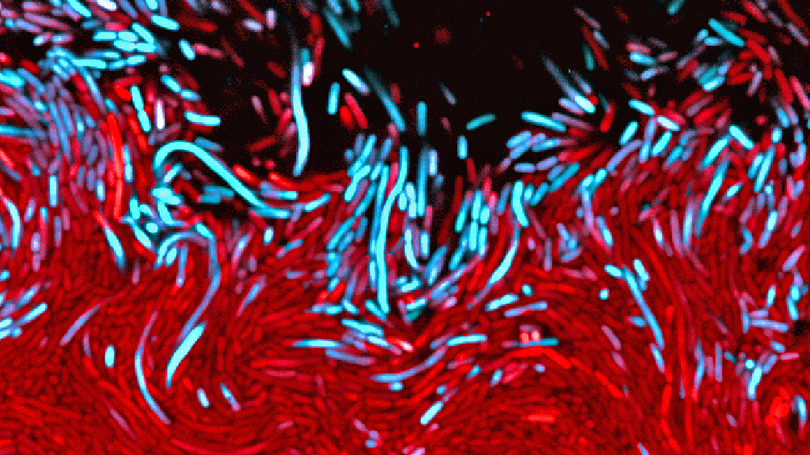 Bacteria (shown in red) in a biofilm are undergoing an attack by predatory phage viruses (infected cells in blue). As infected bacterial cells die, they release new phage particles that go on to infect other cells until most, or all the bacteria present have been destroyed. (Photo courtesy of Carey Nadell)
Nadell’s laboratory has a staff of three graduate students and an undergraduate. “Something cool about the lab is that we have members from both the Ecology, Evolution, Ecosystems and Society graduate program and the Molecular and Cellular Biology graduate program” Nadell says. “We have both types of students working together, learning together. Our first undergrad has just joined us, and she will return in the fall to begin research projects.”

Members of the lab are studying the dynamics of microbial communities—how they evolve and how they might be controlled. They investigate how viruses might be used against bacteria, an alternative that could be employed in the face of growing antibiotic resistance globally. Viruses called bacteriophages, or phages, are the natural predators of bacteria and could potentially penetrate and kill bacterial biofilms.

Nadell’s lab uses a laser-scanning, confocal microscope to study the activities of microbes over space and time. The instrument captures many thin optical slices of complex structures and uses them to reconstruct the 3-D architecture of the bacterial communities. “It is an incredible privilege to have an instrument like this of our own,” he says. “We can do a 72-hour experiment and watch one of these communities grow from almost nothing to full maturation.” This ability, Nadell says, greatly broadens the range of questions that the lab can study.

Since his arrival at Dartmouth in January, Nadell has been immersed in teaching, building a laboratory, and training his graduate students to do research. “This winter I taught a writing seminar for first-year students, a course originally designed by Brittny Calsbeek,” he says. “I’ll teach that again next winter, as well as a journal club focus group, along with Olga Zhaxybayeva, on microbial ecology and evolution.” Students and professors participating in the group select papers from the professional literature, and then read and discuss these papers together.

In the seminar, called “Fact or Fiction? Politicized Topics in Biology,” Nadell says, “We discussed antibiotic resistance, and we talked about climate change and vaccination policy—things that are in the news now that are relevant to our daily lives,” Nadell says. “The students had to take a position on these topics, consider what to do about these problems, and defend their positions on the basis of scientific research. By the end of the term they were very good at it.

“The resources are here for getting a group going with all the specialized equipment that we need,” he says. “The overall caliber of the different research programs here is very high, and at the same time there is also a strong communal supportive environment. That’s a rare combination that has already begun to bear fruits in the sense that we have been able to start collaborations with groups in several other departments and programs across campus.”