Board members were on campus for their annual commencement weekend meeting. 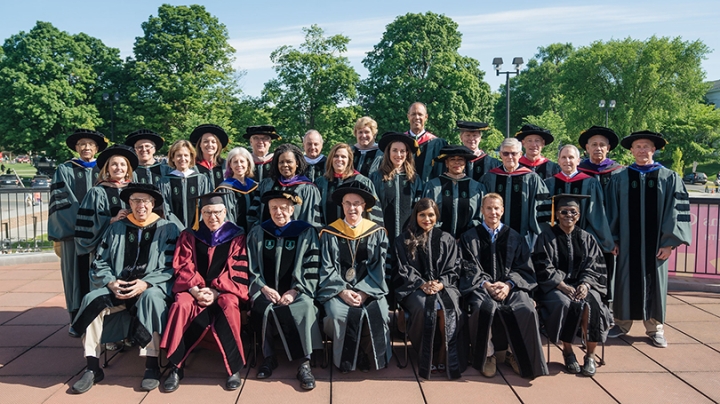 Members of the Dartmouth Board of Trustees and President Phil Hanlon ’77 discussed ways in which the institution is positioning itself for future success with updates on the public launch of the $3 billion The Call to Lead: A Campaign for Dartmouth, undergraduate admissions, and strategic facilities projects.

“Dartmouth is on the move,” says President Hanlon. “At this historic moment, on the eve of our 250th anniversary celebration, the College is experiencing record admissions yield and a remarkable pool of talented student applicants. We are grateful for the growing recognition and awards honoring our faculty and students and excited to see our vision for the future inspiring unprecedented levels of giving. It’s a wonderful time to be at Dartmouth.”

Board members heard a report on the launch of the campaign from Senior Vice President for Advancement Bob Lasher ’88 and key members of the advancement division. Since the public kickoff on April 27, donors have responded with an additional $140 million in gifts and pledges, bringing overall commitments to more than $1.64 billion, or 55 percent of the campaign goal. Highlights include:

The Call to Lead—which runs through 2022—aims to advance Dartmouth’s distinctive educational model as the leading institution for undergraduate teaching. It also seeks to address global challenges through several institution-wide initiatives and to continue to prepare Dartmouth students for lives of leadership.

The board heard from Dean of Admissions and Vice Provost for Enrollment Management Lee Coffin about the results of recruitment efforts over the course of Coffin’s first two years at Dartmouth, and their implications for the future.

Coffin has implemented a data-driven strategy and launched a communications plan emphasizing Dartmouth’s excellence in teaching and undergraduate access to the institution’s outstanding teacher-scholars. Interest from prospective students continues to grow, he says, with early-decision applications at an all-time high. The 22,033 applications for admission to the Class of 2022 represent an increase of 10 percent over last year, making the total the fourth-largest applicant pool in Dartmouth’s history, as well as the greatest percentage increase in the Ivy League.

“Big Green is rising,” says Coffin. “Dartmouth’s world-class faculty and this incomparable setting are a powerful draw for motivated students across the country and around the world. By simply communicating these aspects of Dartmouth with confidence and clarity, we are reaching a greater number of students who want to take advantage of everything we have to offer.”

The board received updates on upgrades and new construction for facilities across campus, including renovation of the academic building that will replace Dana Hall, and the proposed development of the West End, all of which are designed to support the success of faculty, students, and staff across the institution and enhance interdisciplinary collaboration.

Also at the meeting, the board announced four new members, paid tribute to retiring trustees, and participated in graduation activities, culminating in commencement ceremonies on June 10.

The new trustees are Jeffrey M. Crowe ’78, Eileen Chamberlain Donahoe ’81, Elizabeth Cahill Lempres ’83, Thayer ’84, and Christopher Lord ’86. Crowe and Lempres are alumni-nominated trustees and Donahoe and Lord are charter trustees. They join the board on July 1.

“We are excited to welcome these four talented individuals to the board,” says Chair Laurel Richie ’81.  “Chris, Eileen, Jeff, and Liz bring a broad range of skills and experience and strong belief in the transformative power of a Dartmouth education. They are eager to work with President Hanlon to continue strengthening the institution on behalf of the entire Dartmouth community.”

“Dartmouth is fortunate to have been served so well by these dedicated volunteers,” says Richie. “We are deeply grateful for their commitment, contributions, and careful stewardship. Their leadership and love for Dartmouth have helped strengthen the Dartmouth experience for generations of students.”

The trustees remained in Hanover throughout the weekend to participate in commencement-related activities including Class Day exercises for the undergraduate Class of 2018; investiture ceremonies for the Guarini School of Graduate and Advanced Studies, Thayer School of Engineering, and Tuck School of Business, as well as the ROTC military commissioning ceremony; the Phi Beta Kappa induction ceremony; and the annual baccalaureate service for all graduates. In addition, board members attended a luncheon with members of the Class of 1968, who were on campus to celebrate their 50th reunion.

Commencement drew approximately 12,000 guests to the Green as the College awarded 1,146 bachelor’s degrees in the arts and sciences, 89 bachelor of engineering degrees, and 737 master’s and doctoral degrees from Guarini, Tuck, Thayer, and the Geisel School of Medicine.

The board reviewed and approved appointments and promotions to faculty positions at Geisel, Tuck, and Thayer.

Honorary degrees were awarded to actor, writer, producer, author, and comedy star Mindy Kaling ’01, who delivered the commencement address, and to Peter M. Fahey ’68, Thayer ’69, ’70, a retired partner of Goldman Sachs; Frank J. Guarini ’46, a former U.S. congressman and representative to the United Nations; William H. Holmes ’79, a surgeon and global public health leader; Sylvia Kaaya, a psychiatrist, researcher, and dean of the School of Medicine at Muhimbili University of Health and Allied Sciences; and David M. Rubenstein, co-founder and co-executive chairman of the Carlyle Group.

More on the New Trustees

Crowe is managing partner of Norwest Venture Partners, a Bay Area venture firm investing in early-stage companies. Before Norwest, he was CEO of software company Edify, from its founding through its IPO. He has served on the Dartmouth Alumni Council and as district enrollment director in admissions. In 2013, he co-founded the Dartmouth Entrepreneurs Forum in San Francisco and currently serves as advisory board chair of Dartmouth’s Magnuson Family Center for Entrepreneurship. He holds a BA summa cum laude from Dartmouth and an MBA from Stanford, where he served on the management board. He is a member of Phi Delta Alpha. Crowe and his wife, Amy Crowe, live in California and are parents to Laura ’08, Katherine ’10, and Molly ’15.

Donahoe is executive director of the Global Digital Policy Incubator at Stanford University’s Center for Democracy, Development and the Rule of Law. She served as the first U.S. ambassador to the United Nations Human Rights Council in Geneva during the Obama administration. She then served as director of global affairs at Human Rights Watch. She holds a BA from Dartmouth, a master of theological studies from Harvard, a JD/MA from Stanford, and a PhD in ethics and social theory from the Graduate Theological Union Cooperative Program with the University of California at Berkeley. She is a member of the Council on Foreign Relations and on the board of directors of the National Endowment for Democracy. She lives with her husband, John Donahoe ’82, in Portola Valley, Calif.

Lempres is a senior partner emeritus of McKinsey & Company, where she served on the board of directors, and led the Boston office and the global consumer products and private equity practices. She serves on the Thayer board of advisors and is a member of the Centennial Circle of Dartmouth Alumnae. She also serves on the boards of Axalta Coatings, Great-West Lifeco, Culligan International, MIO Partners, the Winsor School, and the Visiting Committee of Harvard Business School. She holds undergraduate degrees from Dartmouth and an MBA from Harvard, where she was a Baker Scholar. She was a member of Sigma Kappa. Lempres and her husband, Marty Lempres ’84, live in Boston and are parents to Grace ’11, Danny, and Katherine.

Lord is co-founder of Criterion Capital Management, a San Francisco-based investment fund specializing in technology, media, and telecommunications. He serves on a number of nonprofit boards dedicated to social change and for more than a decade has been active with the GLIDE Foundation, a San Francisco charity that provides aid for the homeless. Lord is a member of the Dartmouth Campaign Executive Committee and the President’s Leadership Council. He has served as a leadership agent for his class and as a non-trustee member of Dartmouth’s Trustee Investment Committee. He holds a BA from Dartmouth and an MBA from Harvard. He and his wife, Coltrane Lord, have two teenaged sons.